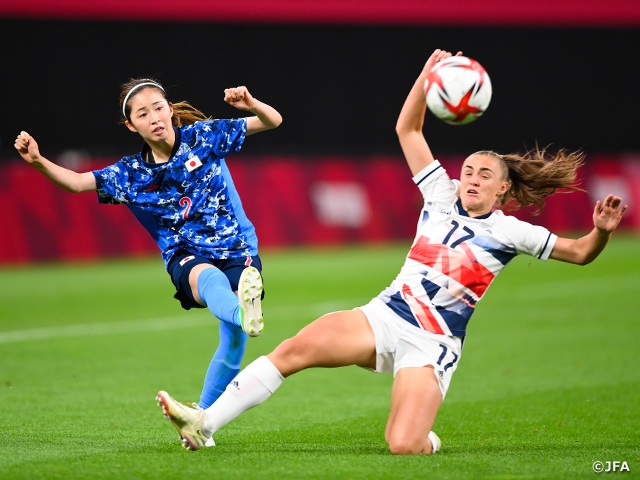 Ahead of the match, players from both sides took a knee to protest against discrimination and racism. When asked about this gesture, KUMAGAI Saki (FC Bayern Munich) revealed after the match, “The players of Great Britain gave us the opportunity to think about racism and we decided to take a knee as a team to show our respect towards their action.” 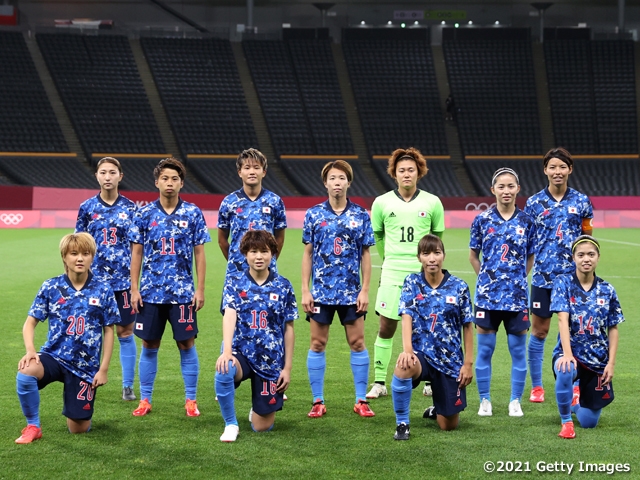 After conceding an early goal in their first group stage match, Japan showcased great intensity from the start. With the offence, midfield, and defence line working in harmony, the Japanese players showcased great collective efforts to contain last year’s Best FIFA Women's Player Lucy BRONZE and striker Ellen WHITE from creating opportunities for the British side.

As coach TAKAKURA Asako mentioned before, “We have enough talents to come up with two strong sides” the players making their first start in this Olympics showcased strong performances, as Sugita and Hayashi created chances in the early minutes to build the momentum for Japan. In the 21st minute, Sugita responded to a deflection caused by a shot taken by SHIOKOSHI Yuzuho (Mitsubishi Heavy Industries Urawa Reds Ladies), but her attempt went wide of the target. Japan continued to create chances throughout the half but fell short from finding the back of the net, as the match entered the break scoreless. 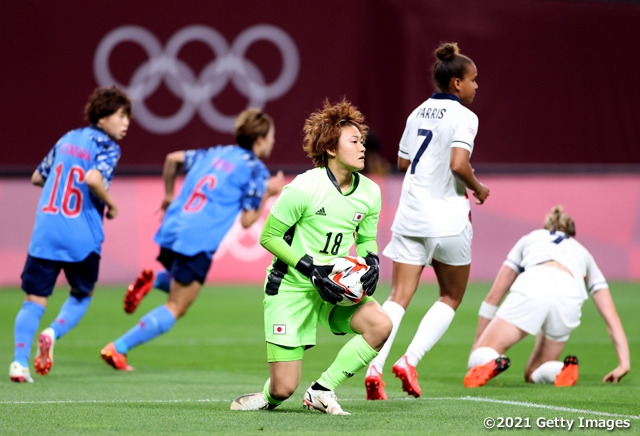 The second half saw Great Britain picking up their pace, forcing Japan to be in the defensive end. In efforts to change the dynamics of the match coach Takakura introduced MOMIKI Yuka (OL Reign) in the 55th minute, followed by MIURA Narumi (Nippon TV Tokyo Verdy Beleza) and ENDO Jun (Nippon TV Tokyo Verdy Beleza) in the 67th minute. However, Great Britain continued to showcase their dominance over Japan, which led to the goal scored by White in the 74th minute.

With their backs against the wall, coach Takakura brought in IWABUCHI Mana (Arsenal), who has scored for Japan in the recent five matches, in the 80th minute, but failed to score the equaliser, losing to Great Britain 0-1 in their second group stage match.

As a result, Great Britain has now clinched the knockout stage with back to back wins. With Canada defeating Chile 2-1, Japan will need at least a draw against Chile in order to keep their hopes alive to clinch the knockout stage. The Nadeshiko Japan will now make their way to Miyagi, as they are scheduled to face the Chile Women’s National Team on Tuesday 27 July at Miyagi Stadium. 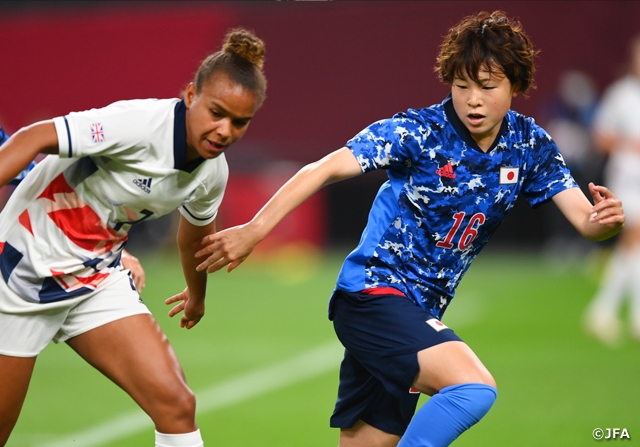 TAKAKURA Asako, Coach of Nadeshiko Japan (Japan Women’s National Team)
Facing a strong opponent like Great Britain, we knew this was going to be a tough match. We focused on keeping our defence organised and showcased a tenacious effort to keep the first half scoreless as we planned. We entered the second half with the intention to apply more numbers upfront, but we were overwhelmed by our opponent’s momentum and forced to be in the defensive end for the majority of the half. We were doing such a great job containing the opponent’s strong point, which was their cross balls, but it is extremely disappointing that we conceded the only goal from a cross. Our overall performance has improved since our first match, so we hope to continue to make the necessary adjustments ahead of our next match.

DF #2 SHIMIZU Risa (Nippon TV Tokyo Verdy Beleza)
We entered the match focusing on how we play in the early minutes and our concept in defence. We were spending too much time in defence and couldn’t create many opportunities upfront. This loss definitely hurts, but our overall performance has gotten better since our first match, so just need to reset our minds and focus on our third match. I know how hard everyone has been working in our daily trainings, so I am determined to give my best efforts when I am on the pitch.

DF #5 MINAMI Moeka (Mitsubishi Heavy Industries Urawa Reds Ladies)
This loss is disappointing especially because we had plenty of opportunities to score in the first half, and a 0-1 loss is always a regretful score as a defender. We have been working on our defence from our first match, and despite seeing signs of improvements, we still need to do a better job to keep a clean sheet. We still have a chance to advance through, so I will do my best to help the team win the next match.

DF #16 MIYAGAWA Asato (Nippon TV Tokyo Verdy Beleza)
We knew we were going to have a tough time defending the British players one on one, so I kept communicating with (Sugita) Hina-san to take a collective approach in defence. I was a bit nervous at first, but eventually got used to the speed and managed to defend in zone against our opponents. We were caught flat-footed when we conceded the goal. The goal came during a period where our team was playing a bit too passively, so I wish we could’ve played more aggressively to fight back. We are now in a must win situation, so we will give everything we’ve got in our next match.

MF #6 SUGITA Hina (INAC Kobe Leonessa)
We managed to enter this match more aggressively than our first match. This was my first time playing as a wide midfielder in an international tournament, but I knew I could give the opponents a hard time, so I focused on penetrating the open space in the flank. Facing opponents who are faster than us, we need to find ways to delay them and try not to race them in full sprint. After playing two matches, it was evident that we sometimes need to just stop the play when things are not going our way. We must now reset our minds and give our best efforts to prepare for our next match.

MF #13 SHIOKOSHI Yuzuho (Mitsubishi Heavy Industries Urawa Reds Ladies)
After playing a bit too passively in the first match, I focused on making aggressive plays in this match. Facing a stronger and faster opponent, I also entered the match focusing on defence. I was matched up against Lauren HEMP, who was a stronger opponent than I expected, so I tried working with (Shimizu) Risa-san to take a collective approach to defend against her. Our team has struggled to score goals, so I will try to make more attempts to help the team win our next match.