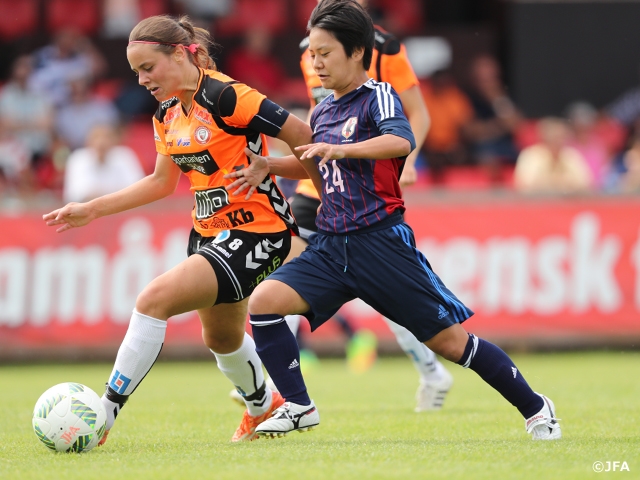 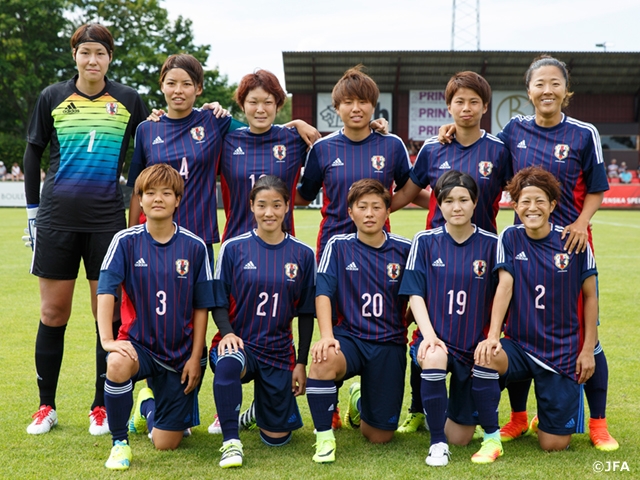 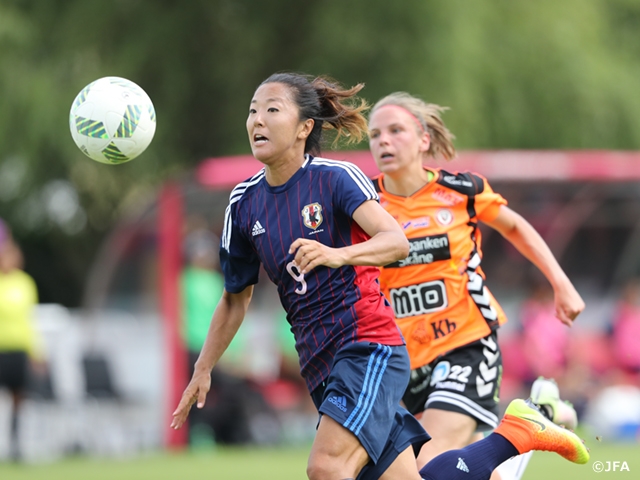 In the beginning, Japan gave the opponents plenty of chances from free-kicks and corners, but their goalkeeper Yamane kept making excellent saves protecting the goal. In the 20th minute, Sasaki made a long pass and Yokoyama jumped out to get it but it was ruled offside. After this Japan gradually gained momentum, thus becoming the receiving end of free-kicks and corners. However, the match ended scoreless in the first half.

In the second half, substituted players came through. In the 50th minute, midfielder NAKASATO Yu received the ball on the left side of the penalty area. Then, she cut inside and scored the opening goal. In the 75th minute, another substitute, forward ARIMACHI Saori, smashed a shot. It hit the goal post, but midfielder CHIBA Sonoko headed it into the net, making the score 2-0 in their favour. They continued to play at their tempo and attack the Kristianstads DFF’s goal, but failed to add to the scoreline.

Japan ended the final match in Sweden with a victory. They will leave for Japan with positives and negatives from the trip.

TAKAKURA Asako, Coach
In the first half, the players were indecisive when receiving the ball and took time before they could make the subsequent plays. The result was “lack of tempo.” In the second half, it got better. We needed to move more swiftly, pressing harder and dispossessing the opponents and making quicker transition to offence.

Although it was good to observe that we improved from the previous trip to the United States, we still have to enhance our accuracy and technique in every one of our plays. The players are required to be perceptive in volatile match situations. They need flexibility and excellent football skills to go up against different opponents. We will select the players who possesses diverse ideas and demonstrate them on the pitch in the future.

MF #14  NAKASATO Yu (NIPPON TV BELEZA)
Today I had a strong will that I would head towards the goal once I had the possession of the ball. Compared to the previous match against Sweden, we were able to move the ball better for longer periods of time, but I couldn’t make plays leading to a goal. There are a lot of issues to be sorted out. However, in this trip, I regained my confidence that despite my small physique I can play well against top-level opponents. Increasing my work-rate, I want to pressure the opponents even more and make a difference in a game.

GK #1  YAMANE Erina (JEF UNITED ICHIHARA CHIBA LADIES)
Today we allowed a series of attacks by the opponent such as free-kicks and corners in the beginning of the match. They played with pace and found open spaces utilizing long passes. However, we did not concede a goal via team effort and it helped us build up our subsequent offence. In the second half, we were able to control the line better, thus not giving up scoring opportunities from their long passes.

Overall, I felt the need to communicate more and deepen our understandings about each other. While working on our individual strengths, we also need to collaborate on various tactics and present them effectively on the pitch.

For the next World Cup and the Olympic Games in Tokyo, I will continue my hard work in the club team to protect the goal better.

MF #8  CHIBA Sonoko (AS HARIMA ALBION)
When I couldn’t play as well as I wanted, our coach and assistant coach encouraged me by saying “a single goal or a good cross will make you confident.” I felt content because I scored today. I was a bit nervous entering the game and tried to get over it by moving constantly on the pitch. I appreciate the senior players for cheering me up and making me comfortable in the game.