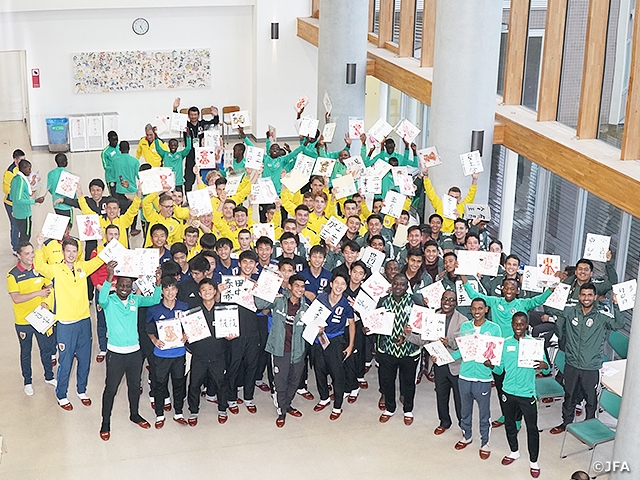 On Saturday 15 June, the four U-16 national teams participating in the U-16 INTERNATIONAL DREAM CUP 2019 JAPAN presented by Asahi Shimbun, Japan, Romania, Nigeria, and Mexico, all took a field trip to the ruins of the Great East Japan Earthquake and participated in a cultural exchange programme to learn about the Japanese culture.

The players first arrived at Sendai Arahama Elementary School, in Sendai city, where the entire area of Arahama was affected by the tsunami that followed the Great East Japan Earthquake. The school has been shut down after the tragedy, but the building remains to pass down the stories of the horrific event to the future generations. The players all listened in carefully to the guide while they observed the photos and films of the event, as they were explained that the four-story building was submerged all the way to the second floor, leaving the marks on the walls and ceilings they are seeing right now.

The players were then taken to Seiwa Gakuen High School, where they experienced Shodo and Origami to learn about the Japanese culture. Along with the teachers of Shodo and Origami, the students of Seiwa Gakuen High School helped out the players create their own artwork. The local students and players engaged in cultural exchange, as they communicated with both English and body gestures. 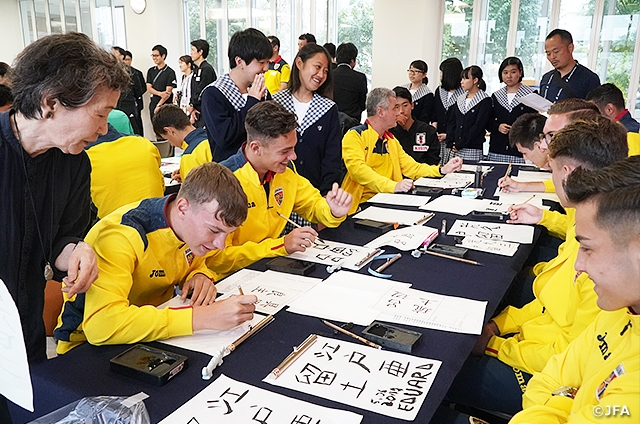 MF ＃14 YAMANE Riku (U-16 Japan National Team)
This is my second time playing in this tournament, so this was also my second time visiting Arahama Elementary School. Many players from other nations probably didn’t even know about the great earthquake that struck Japan. The best we can do for the local people of Sendai, is to give our very best effort on the pitch, and it would be even greater if we can earn the victory in the match.

MF ＃7 Juan Eduardo ROBLES VARGAS (U-16 Mexico National Team)
The tour has left a very strong impression and I was able to feel the strengths of Japan as a country. It really made me brace myself in case such event occurred to my country. From this tour to Japan, I feel like I was able to gain a type of strengths that would guide me through any adversity in my life.

FW ＃17 David CHIDERA EJIOFOR (U-16 Nigeria National Team)
It meant a lot that I was able to visit this place along with other people from different countries. I hope there will be more opportunities like this in the future. Although we suffered a disappointing loss to Japan yesterday, we hope to showcase a strong performance tomorrow and strive to win the match.

DF ＃4 Robert LUNGU (U-16 Romania National Team)
This is my first-time visiting Japan. Japan is a beautiful country and I am enjoying my stay here. Including the people who taught us Shodo and Origami, the hotel staffs, and the guides at Arahama Elementary School, everyone has been great to us and I have nothing but gratitude towards those people. 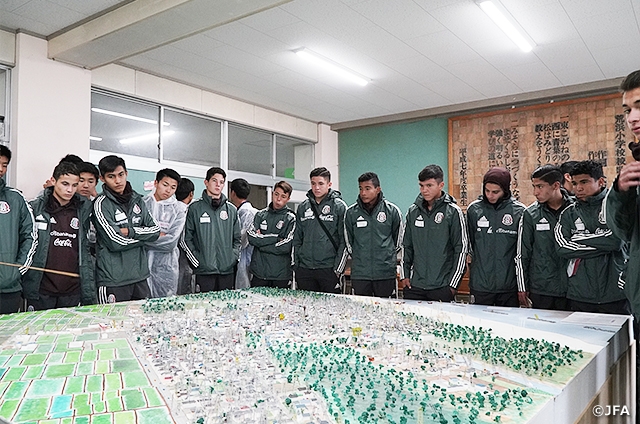