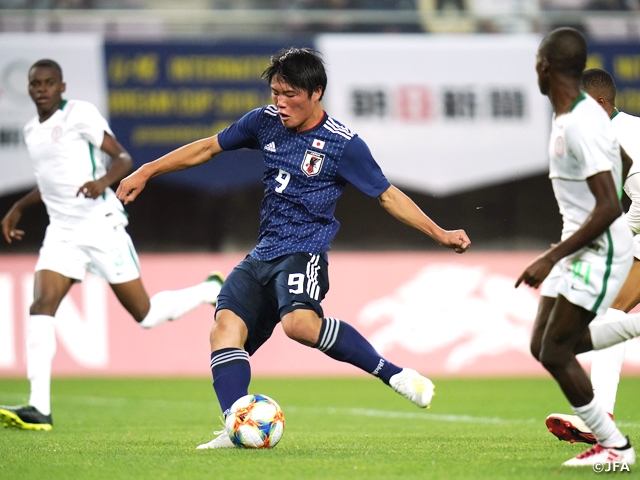 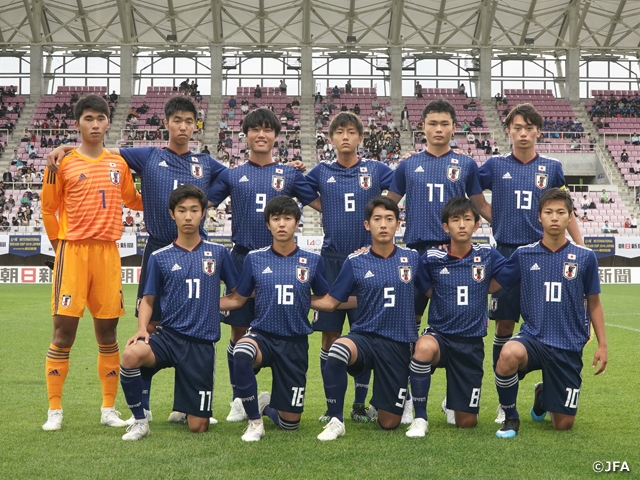 On Friday 14 June, the U-16 Japan National Team played their second match of the U-16 INTERNATIONAL DREAM CUP 2019 JAPAN presented by Asahi Shimbun against the U-16 Nigeria National Team. With the team facing a must win situation in order to take down the title, coach YAMAHASHI Takashi gave a pep-talk ahead of the match, “The players of Nigeria have extradentary athleticism and we need to counter them with our collective approach.”

At the beginning of the match Nigeria came close to scoring the opener, as they broke through the left flank and delivered a cross towards the centre, but the header struck by the Nigerian attacker went wide of the goal. After dodging a close bullet, Japan responded in the seventh minute, when they also broke through the left flank to create an opportunity for KATSUSHIMA Shinnosuke, but his shot also fell short from capturing the target. Despite missing out on the opportunity, Japan gradually increased their ball possession following this play to pick up their rhythm. The opening goal came in the 17th minute, when YAMAZAKI Taishin delivered a pass towards the centre, allowing Katsushima to take a direct shot with his left foot that captured the Nigerian goal. However, Nigeria came back in the 27th minute when they struck a shot to induce a deflection inside the box and converted the opportunity to equalise the match. Neither side managed to take the lead in the remaining minutes of the first half, as the match entered halftime 1-1.

The second half saw Japan taking control of the match through their ball possession. In the 50th minute, Katsushima scored the go-ahead goal for Japan, followed by a header struck by SUWAMA Kosei in the 53rd minute to make it 3-1. Already with two goals scored in the match, Katsushima received the ball deep in the opposing territory in the 85th minute. The Japanese striker shook off the opposing defender before firing a shot that found the back of the net, completing his hattrick and giving his side a three-goal lead. The match ended with a final score of 4-1, taking Japan one step closer from winning the title. 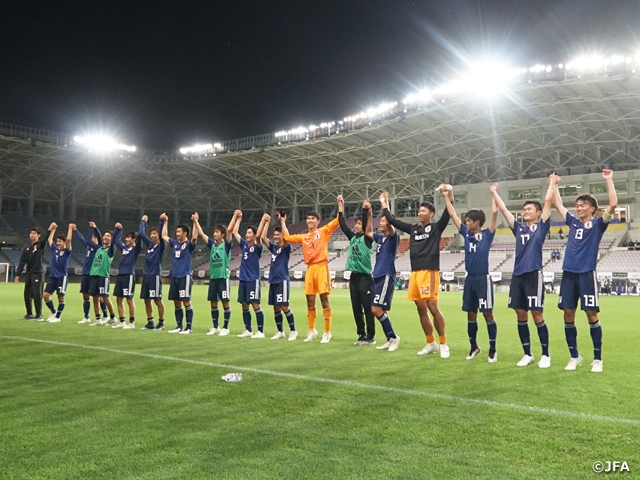 DF #2 SUWAMA Kosei (Yokohama F・Marinos Youth)
After struggling to score goals against Romania, it was great to see us score many goals in today’s match. However, we once again conceded a goal from a counterattack and we also gave up many opportunities to our opponents at the end of the second half, so we still need to improve ourselves ahead of our next match. A win against Mexico will give us the title, so we will enter the next match with the full intention to earn the victory.

DF #5 OSAKO Aoto (FC Tokyo U-18)
Today I was given the start in the left fullback position. Although I was able to make many runs and overlaps at the left flank, the quality of my crosses was poor, and I couldn’t assist any goals. That is an aspect I must improve on, but I am satisfied with the fact that I was able to get myself involved in our team’s attacks. As a defender, it was disappointing that we gave up a goal, but it was nice to see our offence scoring goals that led us to this victory. We are very thankful of our fans’ support and we will give our utmost efforts in our final match so that we can showcase our best performance.

FW #9 KATSUSHIMA Shinnosuke (Kyoto Sanga F.C. U-18)
Although we ended up winning the match in penalty kicks, I was personally very disappointed by the fact I couldn’t help the team win our first match in regulation time. However, following the first match, the team was able to enter the match against Nigeria with a much more positive vibe and we felt an even stronger bond between each other. I entered with a strong intention to score a goal today, so I am very satisfied with my hat-trick and the team’s 4-1 victory. The match against Nigeria has given me a wonderful learning experience, and I hope to implement this experience to become a better football player. We will continue to work hard as a team and strive to win our next match against Mexico.