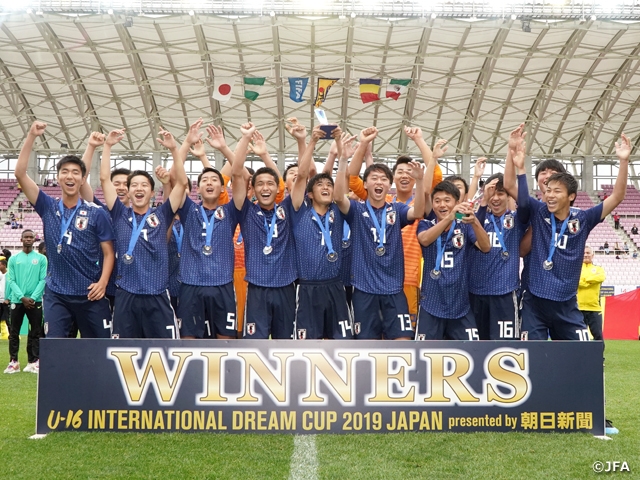 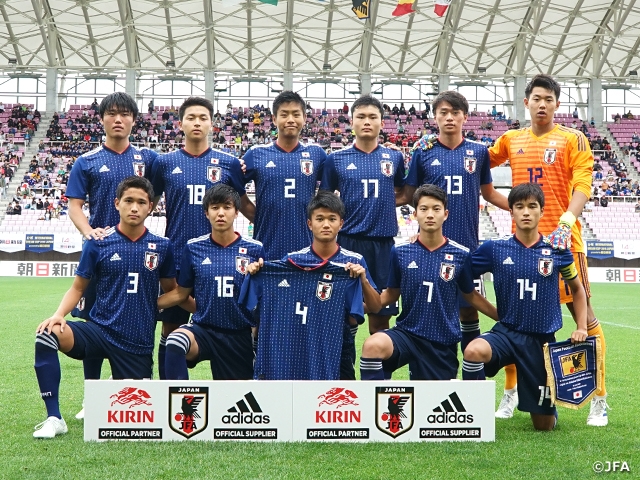 On Sunday 17 June, the U-16 Japan National Team faced the U-16 Mexico National Team in their third match of the U-16 INTERNATIONAL DREAM CUP 2019 JAPAN presented by Asahi Shimbun.

Ahead of their final match of the tournament, Japan’s coach YAMAHASHI Takashi sent off his players by telling them, “We are not going for a draw. Let’s win the title with a victory.” The Japanese players responded to their coach’s words, as they showed great aggression to start off the match. In the 12th minute, NAKAMURA Jiro received the ball in front of the opposing goal, where he shook off a defender before calmly slotting the ball into the net to give Japan an early lead. Seven minutes later, TOYODA Koki delivered a through ball upfront, allowing Nakamura to chase the ball and score his second goal of the match. With momentum on their side, Japan managed to take a 4-0 lead by halftime, as KATSUSHIMA Shinnosuke and Toyoda each scored a goal in the 37th and 45th minute respectively. 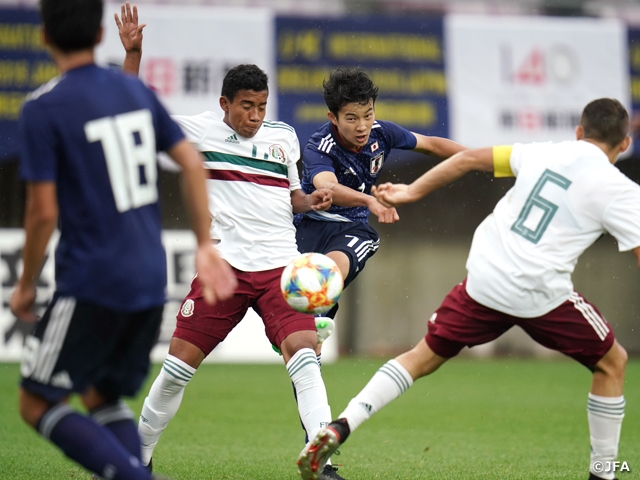 The second half saw the Mexican side rally back in the early minutes, but led by their goalkeeper TAKAHASHI Ippei, the Japanese defence showed great persistency to keep the clean sheet intact. Second half substitute, CHIBA Kanta scored his team’s fifth goal in the 58th minute to all but lock up the win for Japan. The host nation kept their focus until the final whistle to end the match with a final score of 5-0, earning the tournament title of the U-16 INTERNATIONAL DREAM CUP 2019 JAPAN presented by Asahi Shimbun with three straight victories.

YAMAHASHI Takashi, Coach (U-16 Japan National Team)
The players showcased great aggression on the field to take control of the match. Throughout the tournament, our attackers did well to initiate the action and find ways to break through the opposing defence line to score goals. Our defence also showed great intention to force turnovers and defended our goal with great tenacity. It was evident that our players were making improvements through each match and they were becoming more and more dependable. I hope the players will continue to strive to reach higher levels. This tournament was supported by the city of Sendai and the Miyagi Football Association, and many other people. Also, through this tournament, the participants were able to gain a precious experience, not only on the pitch, but also off the pitch through the field trip to the earthquake remains and the cultural exchange event. We would like to thank everyone who has made this wonderful tournament possible. I hope that these players will become a member of their own country’s national team in the future.

DF #3 MATSUKI Kuryu (Aomori Yamada High School)
First of all, I am very grateful to be given the opportunity to play in such a wonderful tournament. Out of the three matches, I feel like we were able to gain the most from our third match against Mexico. We wanted to finish off the tournament on a high note, so it was very satisfying to end with a shutout victory. Through this tournament, I was able to learn where I did well against the foreign teams, and where I need to improve on. We entered the tournament with the intention to “challenge,” and the fact that we managed to win the title gives us great confidence moving forward. Once I return to my school, I will continue to work hard so that I can get called back to this team again.

MF #7 TOYODA Koki (Nagoya Grampus U-18)
Through this tournament, the one thing I felt very strongly was that we cannot take for granted of this environment where we are allowed to play football freely. We must acknowledge that many people are supporting us to create this environment. That notion has helped us hold responsibility of our acts and allowed us to play with the pride of the Japan National Team, which led us to winning the tournament. Even when I return to my club, I will continue to show my appreciation towards my surroundings and give my utmost efforts to become a better player.

MF #15 NAKAMURA Jiro (Gamba Osaka Youth)
I am very happy to be able to score goals in our final match, especially after being kept scoreless for the first two matches. The Mexican players showed great intensity to win the ball and they were very difficult to play against. However, I was able to effectively utilise my strengths to carry the ball and get myself involved in our team’s offence. I received the Asahi Shimbun Award and gained great confidence through this tournament. I am also more aware that I am representing Japan. I will continue to work hard so that I can get called up to the national team at each category and strive to become an exciting player like KUBO Takefusa.