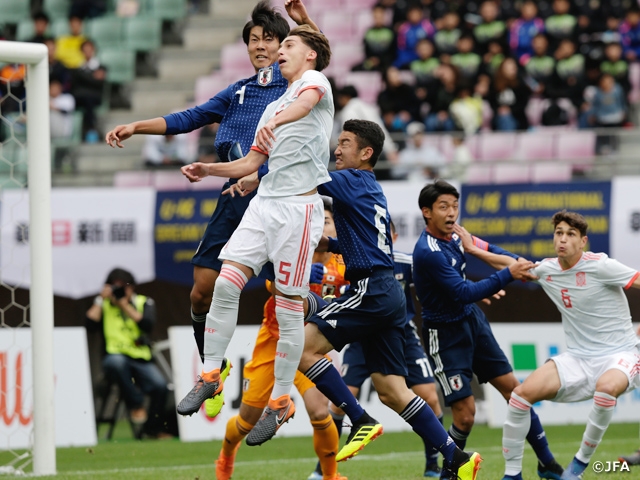 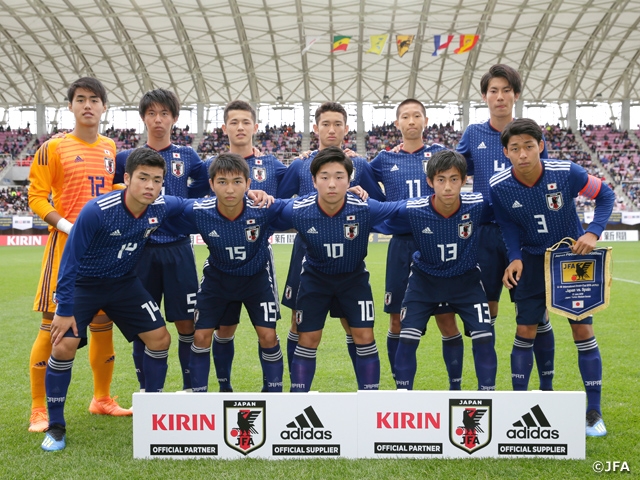 On Sunday 17 June, the U-16 Japan National Team faced the U-16 Spain National Team in their final match of the U-16 International Dream Cup 2018 JAPAN presented by The Asahi Shimbun. With the team dropping its first two matches in the competition, Japan came out determined to earn a win, but Spain had the upper hand in this match as Japan lost with a score of 1-3, finishing the tournament with three losses.

Coach MORIYAMA Yoshiro sent out his players by telling them, “I don’t need players who can’t fight, we must bare our fangs.” However, just like the previous two matches, Japan gave up the initiative to their opponents, as Spain fired consecutive shots early on. In the 12th minute, Spain broke through the flank, not only beating the defenders, but beating the goalkeeper to give them the opening goal. Japan managed to move the ball around in their defence line but couldn’t find ways to effectively connect the ball in their offence. In the 20th minute, the Spanish side displayed a superb individual effort to once again breakdown the Japanese defence to give them a further lead. Spain continued to exploit the spaces behind the Japanese defence line, but led by their captain HANDA Riku, Japan showed their persistence to keep Spain from scoring more goals. In the 34th minute, YAMAUCHI Kakeru took a shot directly off a cleared ball from the Spanish defence, but his attempt went over the crossbar. The match would enter halftime without seeing further chances created by Japan. 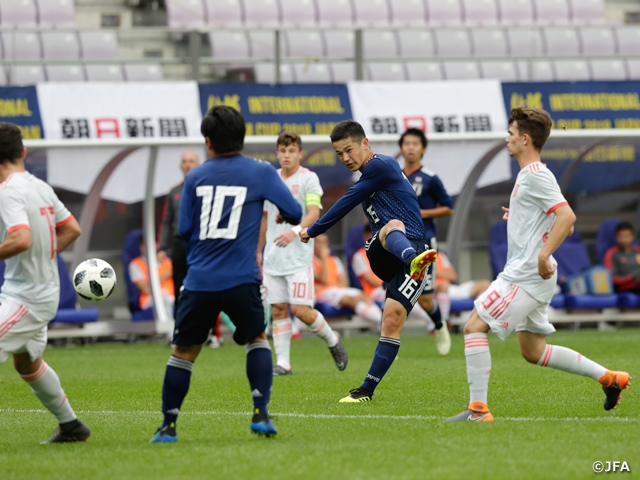 With another pep-talk given by Coach Moriyama, the Japanese side started off the second half showing great aggression in their plays. In the 51st minute, the team attempted a quick restart to catch Spain off guard, where midfielder NAKANO Keita launched a shot, but his effort was saved by the goalkeeper. With the momentum on their side, Japan continued to threaten Spain’s goal as Nakano fired a shot from distance that cleared the head of the goalkeeper, but struck the woodwork, as Japan once again came short from scoring the goal. In the 68th minute, Japan showed good combination to carry the ball up front, allowing midfielder KABAYAMA Ryonosuke to strike a shot, but his shot was denied by the goalkeeper. With the crowd cheering on, Japan created numbers of chances, which finally got paid off in the 84th minute, when defender SUMI Kohshiro delivered a cross towards the centre, which midfielder NARUOKA Hikaru was able to capitalise with his right foot, giving Japan the long-awaited goal. The home side continued to attack as they sought for the equaliser, however, in the 87th minute, Spain caught Japan off guard and scored their third goal, shutting the doors on Japan, as the match ended with a final score of 1-3.

As a result, Spain took down the title while Japan were left in fourth place after losing all three matches. The tournament brought up many tasks to cover for the Japanese side ahead of the AFC U-16 Championship in September. Given the opportunity to play against the World powerhouses, Japan will seek to bounce off of this experience to improve as a team.

MORIYAMA Yoshiro, Coach (U-16 Japan National Team)
After losing all three matches, we were given the opportunity to realise our weakness through this tournament. Paraguay displayed their fighting spirit and battled for the ball in various situations. Senegal showcased their astounding athleticism, lengthy reach, and unique rhythms. Spain is a team we look up to in terms of their techniques, ball and player movements, and their aggression towards scoring a goal. Facing such three nations, Japan was exposed with their physical weakness, lack of fighting spirit, and low intention towards the goal.

This tournament gave us a great sense of urgency ahead of the Asian qualifier for the World Cup. With many of our Asian rivals coming after us, it will be difficult for us to reach the World Cup if we played like we did here. With their future goals in mind, I hope the players will take back what they felt today and implement it into their daily trainings so that one day when they face their world rivals again they can put up different results.

I would like to thank everybody from the participating three nations, players and staffs of Spain, Senegal, and Paraguay. I would also like to thank Sendai city for giving us the opportunity to run this tournament and for the opportunities given to the players through their restoration assistance and cultural exchange programmes. We also appreciate the stadium staffs. Last but not least, we appreciate all the schools, parents, and clubs for allowing their players to participate in this team. Thank you very much.

DF #3 HANDA Riku (Montedio Yamagata Youth)
We entered the Spain match with the intention to utilise what we learned in our first two matches but conceded two early goals to make the match difficult for us. We managed to control the match after Spain lost some momentum late in the second half, but we could only score a goal and lost the match. If we could have played with the kind of aggression we showed in the second half from the beginning of the match, the results may have been different. If we kept playing like this, we would certainly not make it through the AFC U-16 Championship. So, in order for us to play in the FIFA U-17 World Cup, we must keep in mind of the level of the world and implement that thought into our daily trainings. We must become a group where each individual can fight for the team. There were so many things we learned during this tournament, both as a team and as an individual. We will do our best to clinch the U-17 World Cup.