The first fixture played in Hiroshima was between Kawasaki Frontale U-18 (Kanto1/Kanagawa) and Hannan University Senior High School (Kansai2/Osaka). The first half saw Hannan High School create chances by collecting the ball to SUZUKI Akito (#18). However, led by their goalkeeper AOYAMA Kai (#1), the Kawasaki defence showcased great persistency to keep the Hannan offence from scoring a goal, as the first half ended 0-0.

Playing their second match in three days, Hannan High School started to show signs of fatigue in the second half, as Kawasaki started to dominate the ball possession. In the 54th minute, Kawasaki’s MATSUNAGANE Yuto (#20) responded to the cross of IGARASHI Taiyo (#10) to score the opener, as the defender later reflected, “It was nerve-racking because I was wide open, but I was able to head the ball where I wanted.” With momentum on their side, Kawasaki went onto double their lead in the 63rd minute when Igarashi converted the cross delivered by TANAKA Kanta (#9).

Kawasaki hammered the final nail in the coffin in the 76th minute when Igarashi scored his second goal of the match to make it 3-0. Despite the final efforts made by Hannan High School, Kawasaki kept their composure to keep the clean sheet intact, walking away with a 3-0 victory. With his side earning their ticket to the Premier League in their first ever playoff appearance, Kawasaki’s coach NAGAHASHI Yasuhiro praised his players, “Getting promoted to the Premier League has been our goal since launching the team. I knew it was only a matter of time before we achieve that goal, but they went beyond my expectations.” 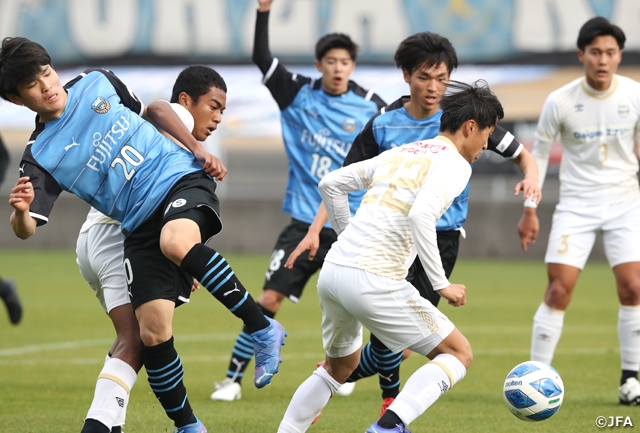 The match between Shoshi High School (Tohoku1/Fukushima) and JFA Academy Fukushima U-18 (Tokai2/Shizuoka), who are trying to make their return to the Premier League since 2019 and 2015 respectively, turned out to be a match in which the defence of both teams shined. In the third minute, Academy Fukushima’s goalkeeper OHATA Kamui (#1) made a spectacular save to deny the shot of Shoshi’s MATSUO Haruki (#10). AYUZAWA Taiyo (#1) also made great save on the other side, blocking the attempt of HONBO Kanaki (#8) in the 15th minute. 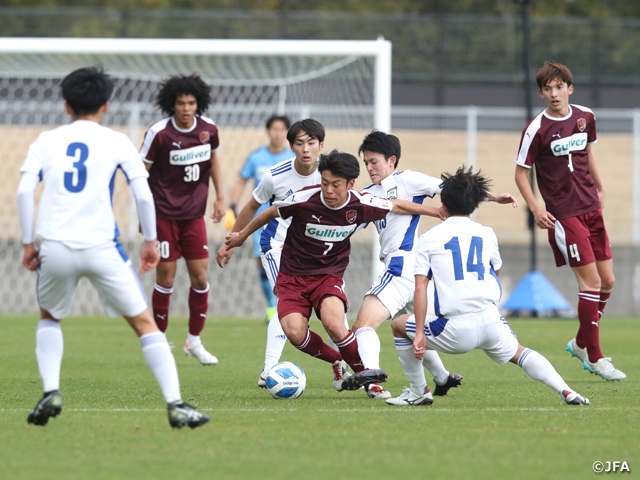 The second half saw Academy Fukushima win multiple set pieces in the final third but couldn’t find ways to convert them. In efforts to break the deadlock, Shoshi’s HONDA Riku (#18) made an attempt in the fifth minute of overtime, but his shot deflected off the crossbar, sending the match into penalty shootout. 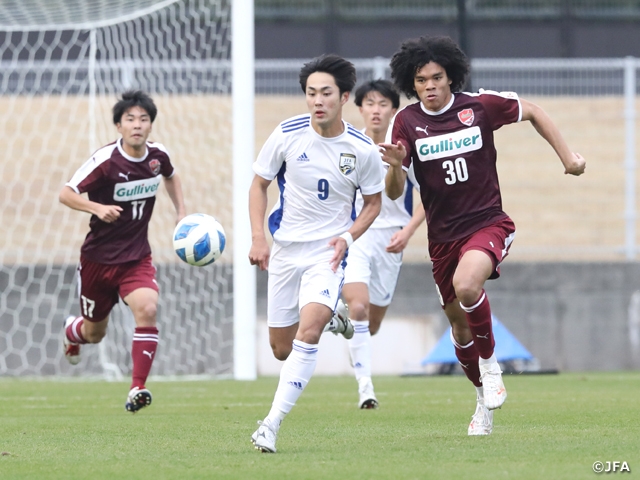 After both sides successfully completed their first three attempts, the shot of Shoshi’s SHINYA Kazuma (#7) struck the right post. With Academy Fukushima making all five of their spot-kicks, they have earned their right to return to the Premier League for the first time in six years. Academy Fukushima’s goalkeeper Ohata, who seemed to be emotionally overwhelmed, mentioned, “Since being named captain this year, I have been playing with a strong sense of responsibility and worked hard all year to bring the team back to the Premier League, so I am very happy.”

GK #1 AOYAMA Kai (Kawasaki Frontale U-18)
We had been aiming to get promoted to the Premier League since the starting day of this team, so we were determined to win the right to challenge and get promoted. Including the players on the bench, we were able to get off to a good start today. Although we played a bit too passively in the first half, I am glad that we were able to keep the opponent scoreless. We managed to gain momentum after scoring the first goal in the second half, and it felt like we had full control of the game. Thanks to the hard work of everyone, we were able to setup a good stage for the team next year.

HAMADA Go, Coach (Hannan University Senior High School)
We were completely out of gas towards the end of the first half. This match could have ended differently if we had scored in the first half, when we were still applying aggressive pressure from the frontline. We were not able to capitalise on our chances, and our opponent was simply better. This was our third time playing in the Premier League Playoff, but the past two appearances came right after losing in the final of the Osaka qualifiers for the All Japan High School Soccer Tournament. This year, we have clinched our spot in the tournament, so we hope to reset out minds and prepare ourselves for the upcoming tournament.

FUNAKOSHI Yuzo, Coach (JFA Academy Fukushima U-18)
The players fought very patiently. We knew this match was going to turn out this way, so we were well prepared, and the players did a great job saying focused throughout the match. Despite the tough match schedule, the coaching staff and players each did their job to maintain their condition. This year’s team is very dedicated and competitive. (Although there was an accident where SEKI Hinata had to be replaced due to an injured) I said from the beginning that it would be an all-out battle, and all 20 players on the roster contributed for this win.

NAKAMURA Koji, Coach (Shoshi High School)
The players did the best they could. It was completely my fault. If I had allowed them to play more freely, I think we would have been closer to victory. In terms of defence, I think the players did a good job to keep their focus throughout the match. (Regarding his decision to bring in NUNOKAWA Haruhiro as goalkeeper for the shootout) He has been showing great form as of late, so I went with my gut feeling and relied on his abilities, but our opponent executed the spot kicks very well. It was not something the goalkeeper could do anything about. Fortunately, we have the All Japan High School Soccer Tournament coming up, so we will resume our trainings for the tournament.