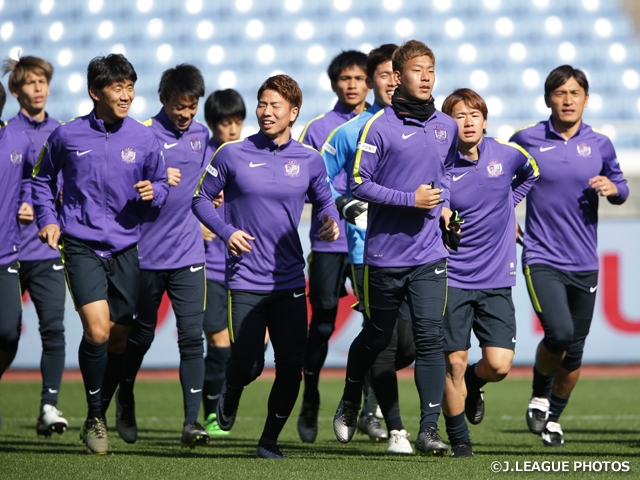 The AFC Champions League 2016 (ACL) Group stage is kicking off from 23 February. 4 Japanese Club teams are joining in this competition and for the first matches Sanfrecce Hiroshima and Urawa Reds will kick off at home whereas F.C. Tokyo and Gamba Osaka are playing away from home.

Hiroshima is facing Shandong Luneng (China) on 23rd. They prepared themselves based on the players who won last year’s J1 League and got the first victory of this year in the FUJI XEROX SUPER CUP 2016 beating Gamba Osaka who is this year’s champion of the Emperor’s Cup 3-1.

In the match, veteran player forward SATO Hisato, current U-23 squad player forward ASANO Takuma, and new player forward Peter UTAKA, who was a substitute, got goals. In addition to the team’s stable defence, their offence was effective with a high level of combination even though the J.1 League season has not yet started.

Hiroshima’s Coach MORIYASU Hajime said: “We want to improve what we could do last season and keep growing up to make good results.” He also talked about playing in the ACL since 2014: “Since 2014, our strength has been better. We are more confident after getting 3rd place in the FIFA Club World Cup. The players are getting tougher.”

Shandong finished in 3rd place in last year’s Chinese Super League (CSL) and faced a playoff match against Adelaide United (Australia) away on 9 February. Even though they had to lose one player in the 2nd half, they won the match 2-1 and qualified for the ACL for the 8th time.

In the last season, the team couldn't move on since they were in 3rd place of their group, due to weak of defence. In this season, the team signed Brazil National Team’s player defender Gil from Corinthians. They are aiming at a higher position of the competition based on the offence players such as forward Diego TARDELLI (Brazil) and midfielder Montillo (Argentina), as well as improving their defence. The team also signed the former Brazilian squad team’s Coach Mano MENEZES. He is the coach who led the team to be runner-up in the 2012 Olympic Games and also made successful results such as in Grêmio and Corinthians.

Hiroshima and Shandong have played against each other in the Group stage in 2010 and Hiroshima lost the first home match 0-1, and then beat them in the return match 3-2. Shandong midfielder Wang Yongpo cannot play this time due to the suspension in the previous playoff match, including him, there are some players who have experienced these matches against Hiroshima. Shandong seems to be in a good condition even though their season hasn’t started yet; this is because of the previous playoff match.

Urawa also has previous experience in playing against Sydney FC (Australia), who will play in Urawa’s home on 24th, in the Group stage in 2007. This is when Urawa got the title of this competition. Urawa drew both matches: 2-2 away, and 0-0 at home. Sydney couldn’t move up to the next round since they had 1 point less than Urawa’s.

Sydney on the other hand, ended the last year’s regular season as runner-up and got the 2nd place in the Grand Final. In the current season which started in October, they are in the 6th place of 10 teams with 7 wins, 8 draws and 5 defeats. For the recent 5 matches they haven’t won at all.

The team’s Coach is Graham ARNOLD who is the former Coach of Australia National team. When he was coaching Central Coast Mariners, he led the team to the ACL twice including the one in 2013 when the team became one of the top 16 teams. He has also coached Vegalta Sendai even though it was a short period of time in 2014.

Midfielder David CARNEY, former Australian squad player, has returned to the team in the beginning of February. The team also has several key players such as forward Alex BROSQUE who has played for the country’s squad team and also for Shimizu S-Pulse, 2 Serbian players midfielder Milos DIMITRIJEVIC, and Milos NINKOVIC, and Iraq National team’s player midfielder Ali ABBAS.

Sydney’s season has already started and they seem to be ready for the match whereas this is the first official match of the season for Urawa even though this is their 5th consecutive time to play in this competition. The Captain of the U-23 Japan National team defender ENDO Wataru signed for the team from this time. He has adjusted himself to the team through a pre-season camp and training matches. Midfielder KASHIWAGI Yosuke said: “We have worked hard to enjoy our level of play in the upcoming matches. We are confident now.” 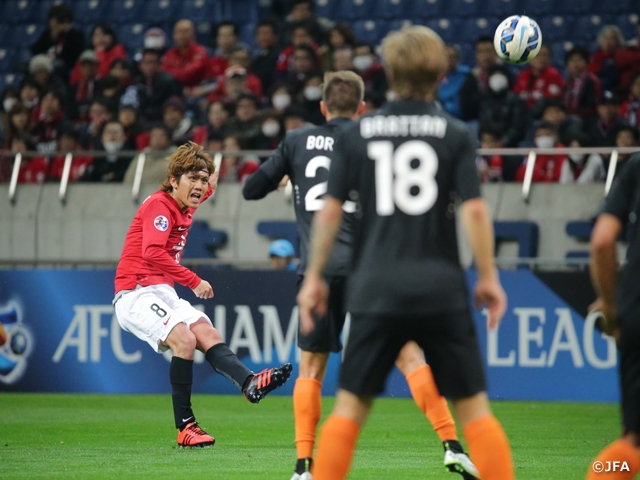 On 9th February, F.C. Tokyo beat Chonburi FC 9-0 at the playoff and qualified for the final. The first Group stage away match for them is against Jeonbuk Hyundai Motors who has won their 4th title of the K League Classic. Jeonbuk was runner-up in ACL in 2006 and 2011. They lost the quarter final against Gamba Osaka last year, but they have a lot of ACL experiences; it is their 10th time. They have lost in the Group stage only once in 2012. They are the regular comer of ACL and one of the strong teams. ACL starts more than 2 weeks before the K League season starting, but the teams should be ready for this match.

F.C. Tokyo is playing in this Asian club team competition for the first time since they were one of the top 16 teams in ACL 2016. The team had their second preseason training camp after the playoff match.

The team’s Coach JOFUKU Hiroshi, who has coached U-16 and U-17 National teams before, says: “What is most important is not conceding any goals; the opponent is eager to win, so we shouldn’t give them any chances. While we won’t be able to take a lot of control, what is also important is how much we can stay patient.”

Meanwhile, Gamba Osaka, who was one of the top 4 teams, will have the first match in South Korea. They are playing against Suwon Samsung Bluewings FC who was runner-up of last season’s K League Classic. This is their 7th time in the ACL and they got to the semi final in 2011.

Gamba Osaka and Suwon has played against each other in the Group stage of ACL in 2010, and Gamba Osaka drew the first away match 0-0 and won 2-1 at home.

Gamba Osaka lost the match against Hiroshima at the FUJI XEROX SUPER CUP on 20th February, and had a time to review the team’s condition. The team’s Coach HASEGAWA Kenta said: “We want to learn from this defeat for the next matches.” Midfielder ENDO Yasuhito said: “Last year, we won the match here but lost the first ACL match. Now I want to switch my mind well to make a good result.”

The home and away Group stage will be held until 4 May and the 2 top teams of each group will move up to the Knock-out Stage. The Final will be in November and the winner of this competition can qualify as the Asian champion for the FIFA Club World Cup which will take place in December in Japan. 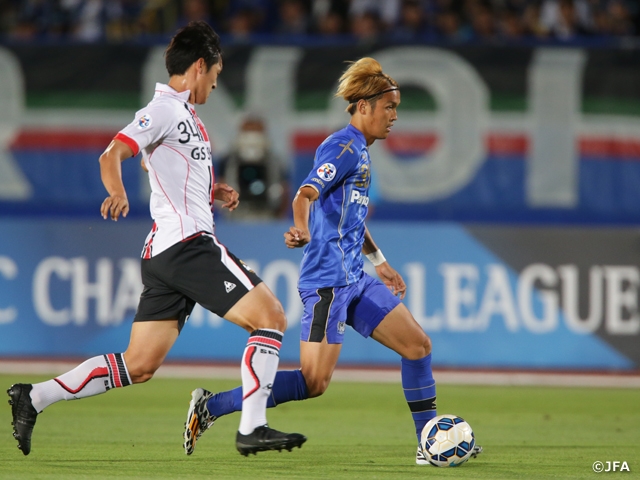