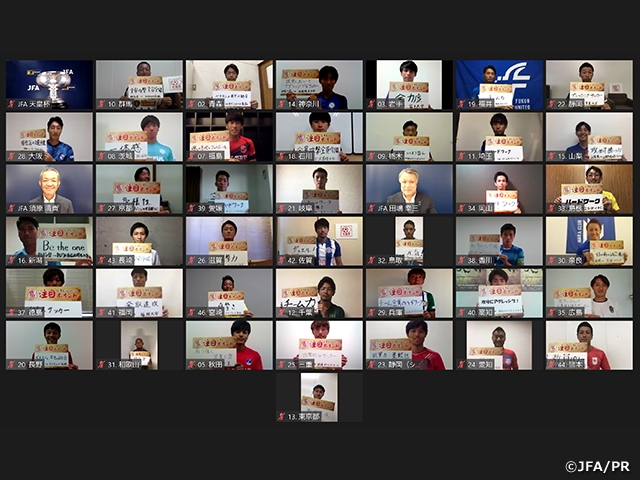 The Emperor's Cup JFA 100th Japan Football Championship is about to kick-off on Wednesday 16 September. Ahead of the first round fixtures, an online conference was held on Monday 14, where the players shared their enthusiasm.

The 100th Emperor's Cup is about to take place. Due to the effects of COVID-19, the tournament will be held with a different format this year.

The tournament will be played in a knock-out format, where 48 teams, 47 prefectural representatives plus the amateur seed Honda FC, will compete in regional divisions until the conclusion of the third round. Once the eight regional representatives are decided, a drawing will be conducted to determine the fixtures from the fourth round. Top teams from J2 and J3 will join the bracket from the quarterfinals, while the top two teams of J1 will be added from the semi-finals. The final will be played on Friday 1 January 2021 at the National Stadium to determine the number one team in Japan.

At the conference, JFA President TASHIMA Kohzo mentioned, “The 100th tournament will be held under a difficult situation, but through this tournament, the football community is striving to deliver love, excitement, and hope. We will give our utmost efforts, so let’s work together to make this happen.” YAMAGUCHI Hotaru from last year’s champions Vissel Kobe, also sent a message towards the participating teams, “I hope everyone will give their best efforts to play on New Year’s Day for the tournament’s 100th final.” Also, on this day, players representing the 47 prefectures shared their enthusiasm ahead of the tournament’s kick-off. 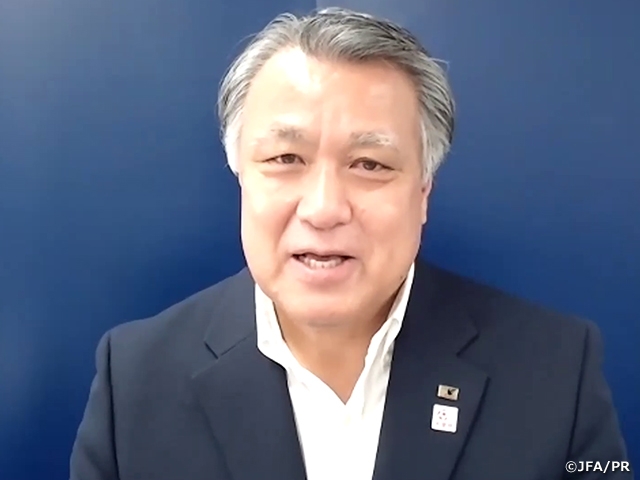 Each year, J3 teams had been the major obstacles at prefectural qualifiers, but without their presence this year, many new faces have made it through to the main tournament. Saruta Kogyo (Akita), who is one of the nine teams making their Emperor's Cup debut, will face Sony Sendai FC (Miyagi), who is making their 21st appearance, at the first round. In recent years, we have been seeing more university teams making deep runs at the tournament, and this year, out of the four first round fixtures played in Kanto, two are matchups between university teams.

Please stay tuned for the exciting first round battles of the Emperor's Cup. 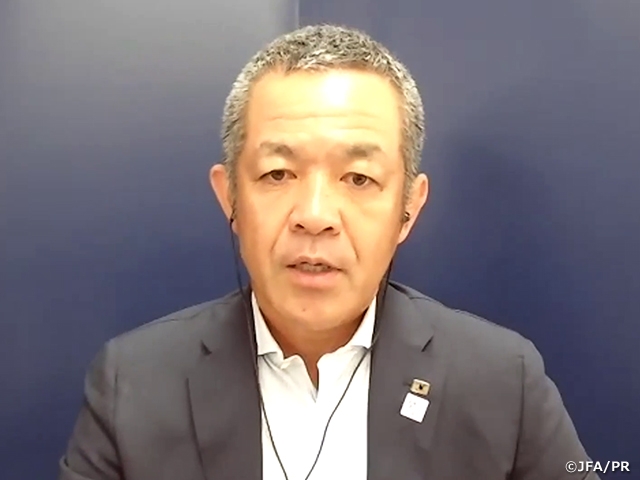 OBATA Junpei (ReinMeer Aomori/Aomori)
We will fight with the pride of representing Aomori and give our best efforts in each of the matches.

IWAMURA Yutaka (Fuji University/Iwate)
We hope to showcase our ideal play model and try to win as many matches as possible. Please keep your eyes on each player’s efforts.

YASUDA Kenta (Saruta Kogyo/Akita)
This will be our corporate football team’s first national tournament appearance. We thank everyone who is supporting us, and we will give our best efforts to stay in this tournament as long as possible.

HIRASAWA Shunsuke (Iwaki FC/Fukushima)
As the representative of Fukushima, we will play an aggressive style of football and showcase a soulful performance at the Emperor's Cup.

CHIKU Kosuke (University of Tsukuba/Ibaraki)
We will showcase a total team effort, where everyone plays both offence and defence.

OSHIMA Takahiro (Tochigi City FC/Tochigi)
We will give our best efforts in each match so that we can make a deep run.

TANAKA Jun (tonan Maebashi/Gunma)
Everyone will be giving their utmost efforts to win each match.

KOBAYASHI Tomoya (Tokyo International University/Saitama)
Everyone is committed to give their best and we hope to showcase an aggressive style of football.

KITAHARA Takahisa (VONDS Ichihara FC/Chiba)
We keep our modest VONDS approach and enter each match as a challenger, so that we can play as many matches as possible.

ISHIHARA Koji (Tokyo Musashino City FC/Tokyo)
This will be our team’s first Emperor's Cup appearance in seven years and our sponsors, fans, and supporters are all cheering for us, so we hope to deliver as many victories as possible.

ENDO Ryo (Toin Yokohama University/Kanagawa)
As a university team, we hope to utilise our stamina and showcase an aggressive style of football.

KODAMA Yukiya (Yamanashi Gakuin University Pegasus/Yamanashi)
We will give our best efforts to showcase our full potential.

HASHIMOTO Kyosuke (Niigata University of Health and Welfare/Niigata)
We will unite as one for the victory and give our best efforts in the match in front of us. We hope to create a sensation at the national stage.

KAWANO Junpei (Kanazawa Seiryo University/Ishikawa)
We will attack and defend as a team and give our total effort to win the match.

YAMADA Yuta (Fukui United FC/Fukui)
We will work hard as a team to play a sensational match.

SHIOZAWA Shogo (Artista Asama/Nagano)
This will be our team’s first tournament appearance, so we will do our best to make a deep run.

MISHIMA Taku (Nagara Club/Gifu)
With this being our first appearance at the Emperor’s Cup, we might get nervous, but we will stay eager to win the match. We will utilise our teamwork to showcase an entertaining match for the viewers.

YAMASHITA Shuya (Tokoha University/Shizuoka)
We will showcase our pressing football for the entire 90 minutes and extra time. We will prepare ourselves to crate some upsets.

SUZUKI Yuya (Honda FC/Amateur seed/Shizuoka)
Continuing from last year, our goal is to win the Emperor's Cup, so we will give our best efforts to achieve our goal.

MONIWA Teruyuki (FC Maruyasu Okazaki/Aichi)
Our strong point is our fighting spirit! As the representative of Aichi, we will showcase a soulful battle.

FUJITA Kohei (Suzuka Point Getters/Mie)
Through our attacking style football, we will try to win as many matches as possible.

NAGATOMI Hirotaka (MIO Biwako Shiga/Shiga)
As the representative of Shiga, we will try to make a deep run.

TERADA Shinichi (Ococias Kyoto AC/Kyoto)
The players and staffs will unite as one to make a deep run at this prestigious tournament.

CHO Young-Cheol (FC TIAMO Hirakat/Osaka)
We have many talented players on our team, so we hope to prove that a regional team can also showcase an efficient style of football.

ISHIHARA Yuki (Cento Cuore HARIMA/Hyogo)
Our strength is in our ability to work hard, so we will give our best efforts to make a deep run at the tournament.

YUMA Masaya (Nara Club/Nara)
Our goal is to win the match in front of us, so we will give our best efforts in each match.

KANO Ren (Arterivo Wakayama/Wakayama)
We hope to utilise our offensive firepower to score goals and make a deep run at the tournament.

GONDAI Takayuki (Yonago Genki SC/Tottori)
We will work together as a team and showcase an energetic performance.

TABIRA Yuzuru (Matsue City FC/Shimane)
As the representative of Shimane, we hope to make a deep run.

MORISAKO Ryota (Mitsubishi Mizushima FC/Okayama)
We will run hard as a team and display a soulful performance to earn the victory.

TANAKA Ryo (Fukuyama City FC/Hiroshima)
This will be our first tournament appearance, so we will enter the matches with a challenger’s spirit and fight hard as a team.

ISHIKAWA Masahiro (FC Tokushima/Tokushima)
We will give our best efforts as the representative of Tokushima.

KAWADA Taisei (Takamatsu University/Kagawa)
We hope to showcase our dedicated defence and advance through to the second round.

ISHII Ryunosuke (Matsuyama University/Ehime)
As a university team, we will work hard and give our best efforts. We hope to win the match by attacking and defending as a team.

YOKOTAKE Tsubasa (Kochi United SC/Kochi)
We hope to showcase an entertaining match by showcasing an aggressive style of football.

UMEKI Tsubasa (Fukuoka University/Fukuoka)
Our team’s strength is in our quick transition and counterattack. We will give our best efforts to win the match.

TSURUTA Yohei (EV Internacional/Saga)
We will not lose in work ethics and fifty-fifty balls. We will always fight for the ball. Our goal is to play at the National Stadium on New Year’s Day and enter next year’s ACL.

OKUBO Chisato (MD Nagasaki/Nagasaki)
We will not forget to have fun on the pitch and enter the match as a challenger. We will give our total team effort in each match and strive to win the title.

UEZONO Takuya (Kumamoto Teachers Football Club/Kumamoto)
We are a team consisted by teacher from Kumamoto prefecture. We will give our utmost efforts to showcase an entertaining match.

ISHII Kenta (Tegevajaro Miyazaki/Miyazaki)
With the tournament being held under this current situation with COVID-19, we will give our sincere efforts while embracing the joy of playing football.

*Please be aware that there were teams who were not able to attend the conference due to their training or travel schedule. 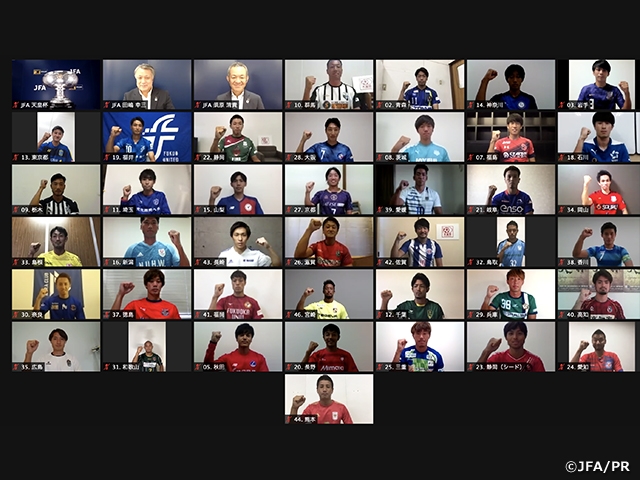