On Friday 25 November, two days ahead of their second group stage match at the FIFA World Cup Qatar 2022™, the SAMURAI BLUE (Japan National Team) held a closed training session at their base camp in Doha.

The team began their training session before noon with the upcoming match scheduled to kick-off at 13:00 on Sunday. Only 24 players were spotted on the pitch as TOMIYASU Takehiro (Arsenal) and SAKAI Hiroki (Urawa Red Diamonds) trained separately from the team due to leg discomfort.

The players were observed going through their warmup routine before engaging in a passing drill during the first 15 minutes of the session, which was open to the media. The players were then split into two groups as they gradually increased their intensity level under a relaxed atmosphere. The session soon went behind closed doors as the players worked out for about an hour and a half. 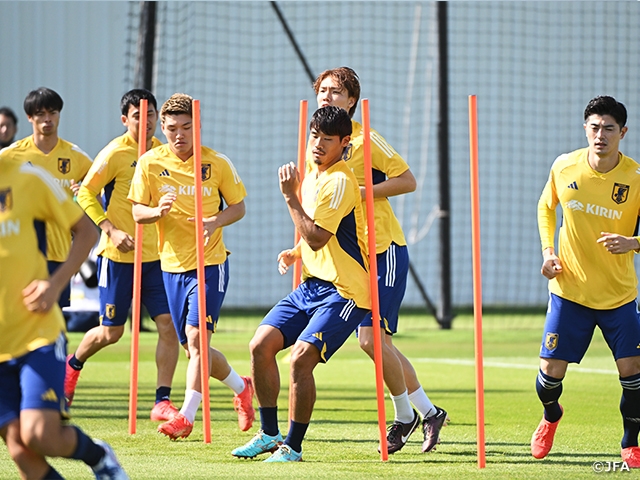 After defeating Germany 2-1 on Wednesday, Japan is currently in second place in Group E. Depending on the outcome of the following match, in which Germany and Spain square off, Japan may secure a spot in the round of 16.

Japan’s next opponents, Costa Rica, fell to Spain 0-7 in their opening match. Currently in fourth place, they are in a must win situation in order to avoid elimination.

Costa Rica clinched their third consecutive, sixth overall World Cup by finishing fourth in the CONCACAF qualifiers before winning the intercontinental play-off against New Zealand. Their most notable success at the World Cup came in the 2014 FIFA World Cup Brazil™, where they defeated Uruguay and Italy in successive matches before drawing with England to top their group. Goalkeeper Keylor NAVAS and striker Joel CAMPBELL were among the players who experienced this impressive run, which saw them defeat Greece in the round of 16 to reach the quarterfinals.

MITOMA Kaoru (Brighton & Hove Albion FC), who entered the match against Germany as a late substitute to setup the goal of DOAN Ritsu (SC Freiburg), commented, “I think our opponents are going to be pressing forward, so I should be able to receive the ball in an open space. It is important that I take advantage of the spaces behind the defenders and win the one-on-ones at the flank in order to maximise my ability to take on players with my dribbling skills.”

On this day, the training started before noon in preparation for the early kick-off in the weekend, after the team had been training in the cooler evening hours since arriving in Doha, but the Brighton winger did not seem to be bothered by the heat, saying, “I got used to it as I moved,” and “the stadium is air-conditioned, so I think it will be fine.”

Regarding the team’s match schedule, in which they play every four days, ITO Junya (Stade de Reims) mentioned that he had experienced playing with a three-day rest while playing for KRC Genk in Belgium, and said, “It is actually much better than playing once a week. My body is accustomed to it.”

Ahead of the match against Costa Rica, an opponent Ito scored his first international goal at the KIRIN CHALLENGE CUP in September 2018, he commented, “I have a positive image. I remember exactly how I scored that goal.” 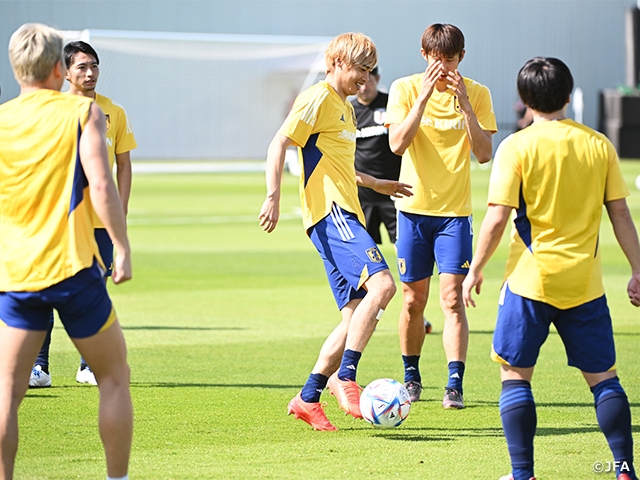 The team will hold an official training session before noon on Saturday before heading into their match against Costa Rica on Sunday at Ahmed bin Ali Stadium.