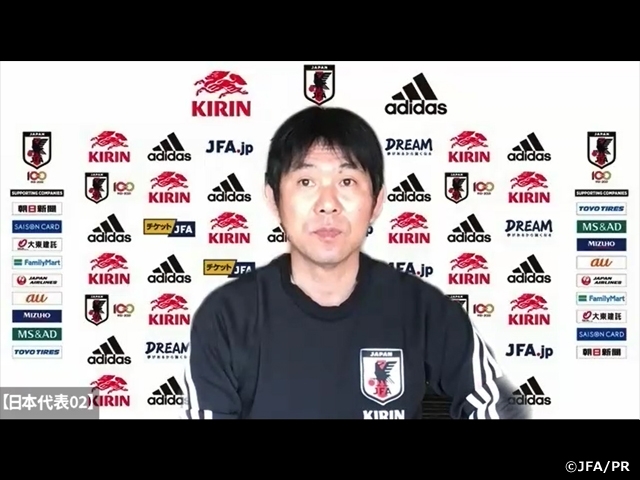 On Sunday 6 June, one day before their match against the Tajikistan National Team in the second round of the Asian qualification for the FIFA World Cup Qatar 2022™, coach MORIYASU Hajime of the SAMURAI BLUE (Japan National Team) appeared in an online press-conference to share his aspiration to “Strive for victory while raising the overall level of the team.”

Following their 10-0 victory over Myanmar on 28 May, where the team clinched their spot into the final round, 12 players have left the squad to join the U-24 Japan National Team, including YOSHIDA Maya (U.C. Sampdoria), SAKAI Hiroki (Olympique de Marseille), and ENDO Wataru (VfB Stuttgart), who is joining as the “Over-age (OA)” players ahead of the Summer Olympics.

With the team set to enter the final round in September, coach Moriyasu mentioned, “I would like to give more opportunities for players with less international experience. I want to see how they respond at the individual level.” The coach continued by sharing his aspiration for the upcoming matches, “I need our players to strive for victory and gain match experience through these qualification matches, so that they can further understand the team concept. ”

Japan is currently in first place in Group F with a 6-0 record and has conceded zero goals thus far. Coach Moriyasu stated, “We want to finish off the second round on a high note by keeping the perfect record intact.”

On this day, the SAMURAI BLUE held an official training session at the match venue, Panasonic Stadium Suita. All players except for OSAKO Yuya (Werder Bremen), who felt a discomfort in his left leg, showed up on the pitch, as they were seen going through their warmup routines during the first 15 minutes where the session was open to the media. Also on this day, ONAIWU Ado (Yokohama F.Marinos) was called up as an additional player. 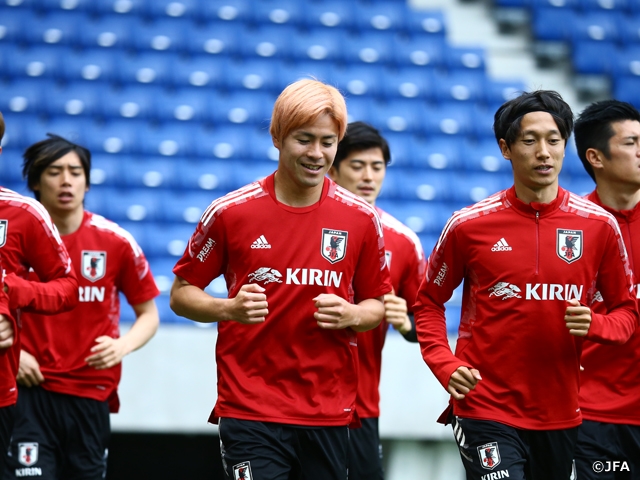 FURUHASHI Kyogo (Vissel Kobe) who claims that “I can play any attacking position,” shared his aspiration for the match, “I want to make plays that frustrates the opponent and capitalise on the opportunities.”

Tajikistan is coming off a 3-0 victory against Mongolia in March and currently holds a 3-1-2 record, sitting in second place with 10 points. Following their match against Japan, the team is scheduled to face Myanmar on 15 June.

In order to advance through to the final round and to clinch the AFC Asian Cup China 2023, Tajikistan will need to remain in second place while keeping a record that is good enough to be in the top four teams among the second place finishers from each group. The team will still have a chance to advance to the third round of the AFC Asian Cup qualifiers if they can finish in third place or in the top four teams among the fourth place finishers. After arriving in Japan on 3 June, coach Usmom TOSHEV of the Tajikistan National Team commented, “These two matches will be extremely important for us.”

In the first leg between the two sides, MINAMINO Takumi (Southampton FC) scored a brace to propel Japan past Tajikistan at Dushanbe in October 2019.

The Tajikistani squad includes familiar faces like Parvizjon UMARBOEV and Akhtam NAZAROV, but majority of the players have changed in recent matches, as under category players have newly joined the team, including those who played in the FIFA U-17 World Cup Brazil 2019. The team has played four friendly matches this year and tied against Iraq and Thailand in May.

When asked about their opponent, coach Moriyasu mentioned, “I am getting the impression that they have broaden their range of tactics since our previous match. They have polished the quality of their counterattacks.”

SHOJI Gen (Gamba Osaka), who has made his return to the national team in nearly two years, commented, “I need to make a case for myself, but the team’s victory is the number one priority, so we must do our best to win this match.”

YAMANE Miki (Kawasaki Frontale), who scored a goal in his national team debut against Korea Republic in March, also commented, “I want to showcase what I am capable of doing while also keeping in mind of the team concept.”

As measures to prevent the spread of COVID-19, the match will be held behind closed doors. 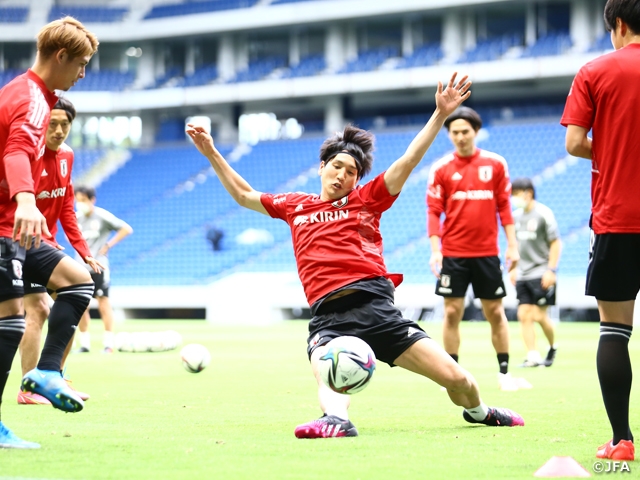 MORIYASU Hajime, Coach of SAMURAI BLUE (Japan National Team)
I need our players to strive for victory and gain match experience through these qualification matches, so that they can further understand the team concept. We need strive for a higher level both as a team and as individuals. Many of our core players will be joining the U-24 squad for the month of June, but this presents us with an opportunity to raise the overall level of the team, so I need the players to challenge themselves in these matches. We need to build a foundation that can function regardless of the players on the pitch. I demand the centre halves to win the individual battles in defence, lead the defence line, and initiate our attacks, but they need to first focus on stopping the opponent at the individual level. Tajikistan has played multiple matches ahead of their matches in June, so they must be fully prepared. I am getting the impression that they have called up lots of young players, but I am anticipating a similar line-up from when we faced them in the first leg. They played very aggressively at home, and I am sure they will try to earn as many points as possible in this match too. We will finish off the second round on a high note by keeping the perfect record intact and continue to showcase a strong performance in our friendly match against Serbia as well. In order to make our fans and supporters happy, we will give our utmost efforts to win the match and showcase a strong performance that can deliver energy and courage to everyone watching the match.

DF SHOJI Gen (Gamba Osaka)
The three OA players joining the U-24 team showcased a wonderful performance yesterday. The two centre halves made very few mistakes and displayed great composure. I need to consider them as my rivals, but at the same time I want to learn from them, especially how Yoshida brings stability and composure to the team. Recently, there has been a division between players playing in the J.League and clubs overseas, but it doesn’t necessarily mean that you improve just because you are playing overseas. We still need to improve the overall quality of the domestic players, but we are not that far behind neither. Regardless of where you play, it is important that you are playing at a regular basis. I hope to stay flexible and make my adjustments according to the type of player I am up against. The team has kept a clean sheet in every match thus far, so I will do my best to keep this streak going.

DF YAMANE Miki (Kawasaki Frontale)
I am getting used to the team’s intensity level and feeling pretty good about how I am playing. If I am given the opportunity to play in our next match, I want to showcase what I am capable of doing while also keeping in mind of the team concept. We have been keeping a clean sheet at each match thus far, so we hope to continue with that trend. I think that I have been evaluated for what I have done at my club, so I hope to showcase my usual performance, while also meeting the standards of the national team. As a defender of the national team, I need to be able to handle the opponent one-on-one. I may not have the physicality to go head-to-head against a strong opponent, but I am always anticipating stealing the ball when the ball is away from the opponent.

DF SASAKI Sho (Sanfrecce Hiroshima)
In this match against Tajikistan, it is important that each player showcases a strong performance to give the team a victory. We need to strive to score as many goals as possible while keeping a clean sheet. If I am given the opportunity to play on the pitch, I will do my best to earn results. Nobody is guaranteed with a spot on the national team, so I must display my strengths and prove that I can make a difference for the team. I was pretty satisfied with my performance in our match against Korea Republic in March, but there were still areas I can improve on, so I will try to play more aggressively in our next match. Through each match in June, we are working to raise the overall level of the team.

MF FURUHASHI Kyogo (Vissel Kobe)
I am glad I was able to make a case for myself in our last match against the U-24 Japan National Team. However, I still believe that I can do better, so I need to challenge myself and push even harder to showcase a better performance. In order to survive this race within the national team, I need to make the most of the time I am given and capitalise on the one opportunity that will come by. I still need to demand for the ball more, so that is an aspect I must improve on.

Usmom TOSHEV, Coach of Tajikistan National Team
We have played many friendly matches to prepare ourselves for what’s to come, but friendly matches are different from official matches. Our team consists of many players who have been promoted from the underage categories. Despite the lack of experience, we are highly motivated and filled with enthusiasm, so I am not worried about tomorrow’s match. Japan consists of many experienced players, and they are a clever team. It is interesting to see how our players play against them. Our chance to win second place may be slim, but there is still a chance. These two matches are very important for us, so we will prepare ourselves in the best way possible. 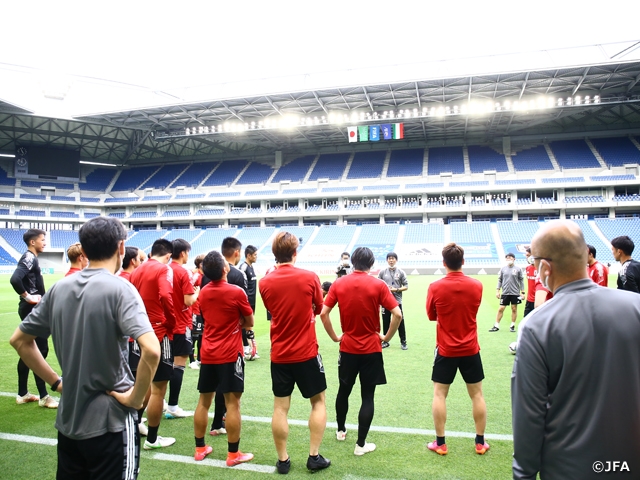