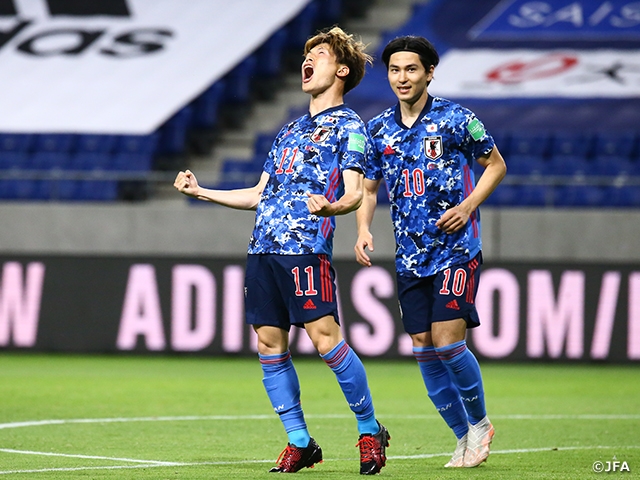 On Monday 7 June, the SAMURAI BLUE (Japan National Team) played their seventh fixture in the second round of the FIFA World Cup Qatar 2022™ Asian qualifiers against the Tajikistan National Team at Panasonic Stadium Suita. With FURUHASHI Kyogo (Vissel Kobe) scoring and assisting a goal apiece, and MINAMINO Takumi (Southampton FC) marking a goal in his seventh consecutive qualification match, Japan won the match 4-1 to extend their winning streak to seven matches.

After clinching their spot into the final round with their win over Myanmar on 28 May, 12 players left the squad of SAMURAI BLUE to join the U-24 Japan National Team, who is preparing for the Tokyo Olympic games. With the likes of YOSHIDA Maya (U.C. Sampdoria), SAKAI Hiroki (Olympique de Marseille), and ENDO Wataru (VfB Stuttgart) also leaving the squad to join the U-24 side as the “over-age (OA)” players, coach MORIYASU Hajime made a drastic change to the starting line-up.

To start the match, ASANO Takuma (FA) was named as the lone striker with Minamino, HARAGUCHI Genki (1. FC Union Berlin), and Furuhashi beneath him. It was HASHIMOTO Kento (FC Rostov) and KAWABE Hayao (Sanfrecce Hiroshima) who anchored the midfield, while YAMANE Miki (Kawasaki Frontale) and SASAKI Sho (Sanfrecce Hiroshima) were placed in the flanks as the fullbacks. SHOJI Gen (Gamba Osaka) and NAKATANI Shinnosuke (Nagoya Grampus) were named as the centre halves, with GONDA Shuichi (Shimizu S-Pulse) defending the goal.

The opening goal came in the sixth minute, when Asano responded to a through ball sent by Yamane to enter the box. The shot taken by Asano was blocked by the GK, but Furuhashi was there to convert the loose ball to give Japan an early lead.

Despite conceding the lead, Tajikistan continued to show great aggression, as the team can still clinch the final round of the World Cup qualifiers as well as the third round of the AFC Asian Cup China 2023 qualifiers, depending on the results of their remaining two fixtures.

While Tajikistan increased their intensity level, Japan struggled to find their rhythm, as the players were still testing the water with the new line-up. Just three minutes following the opening goal scored by Furuhashi, Tajikistan scored the equaliser, as Ehson PANSHANBE struck a header off a cross sent by Manuchehr SAFAROV from the right side.

For Japan, this was their first goal conceded in seven fixtures played at the second round, but the Japanese players showed great composure after this goal, keeping a close eye on the Tajikistan attackers to stop them from initiating counterattacks.

Japan regained their lead in the 40th minute, when Furuhashi reacted to Yamane’s pass before delivering a cross towards the near post, where Minamino made a run to redirect the ball into the net. The three players showcased perfect harmony to produce the goal, giving Japan a one goal lead at halftime.

Picking up where they left off in the first half, Japan continued to show their dominance in the second half. With SAKAMOTO Tatsuhiro (Cerezo Osaka) and KAMADA Daichi (Eintracht Frankfurt) entering the match at halftime, the Japanese players showcased great pass works to build their offence. In the 51st minute, Hashimoto exchanged passes with Yamane to break into the box and calmly slotted the ball into the far corner, giving Japan a two goal lead.

With momentum on their side, Japan continued to press forward, as coach Moriyasu introduced OGAWA Ryoya (FC Tokyo) and MORITA Hidemasa (CD Santa Clara) in the 62nd and 68th minute respectively, to add layer to their attacks. In the 70th minute, Kawabe intercepted the pass of the opposing GK and slotted the ball into the open net, scoring his first goal with the national team in his first start.

In the closing minutes of the match, coach Moriyasu elected to make a system change, as TANIGUCHI Shogo (Kawasaki Frontale) was introduced in the 74th minute, shifting the formation to 4-1-4-1. However the match ended without further goals scored by either side, as Japan walked away with a 4-1 victory.

Also on this day, another fixture from Group F took place in Osaka, as fifth place Mongolia took on third place Kyrgyz Republic and won the match 1-0, closing down within a point to Kyrgyz Republic in the group ranking. 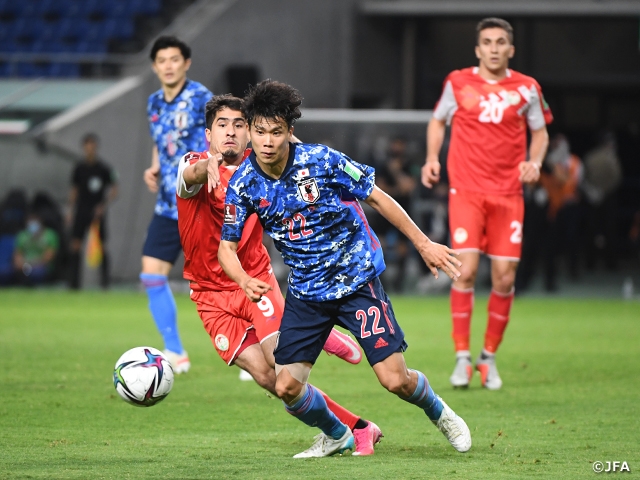 MORIYASU Hajime, Coach of SAMURAI BLUE (Japan National Team)
Although we were able to score the opener from a great play, we conceded the equaliser soon after, which was the first goal we conceded at this round. Despite giving up the goal, the players did well to maintain their composure and showcased a persistent performance. It was evident that the players were struggling to get on the same page, but they continued to challenge themselves to make adjustments. By scoring goals and making runs for the team, the players really showed their presence on the pitch, and their efforts will allow us to reach a higher level as a team.

The fact that I made multiple substitutions throughout the match led to our team committing lots of mistakes. In an ideal world, players would be playing in harmony regardless of who is on the pitch, but it is not realistic to demand perfection from a team that only trained once as a team, and under intense pressure like we faced today. So it was somewhat expected that we would be committing mistakes today, but it was great to see our players making persistent efforts to raise the quality of the team. In order to prepare ourselves for the unexpected, it is important that we broaden the player pool and choose the best players at any given time.

We had kept a clean sheet at each match leading to this match, so it would’ve been ideal if we were able to keep that streak going, but this was not a bad result for this team. It is inevitable that we will concede sooner or later. What is important is how they react when they concede, and the players showed resilience to fight back after conceding the goal today, which was great to see.

It was also great to see the younger players pushing themselves to make quicker transitions and raising their intensity level in one-on-one situations. But overall, we need to raise the intensity level even higher, while also raising the quality of plays, both as a team and as individuals. Today we were able to earn a win against a tough opponent. I hope the players will make the most of this experience and strive to reach a higher level.

DF #4 SHOJI Gen (Gamba Osaka)
It is very disappointing that we conceded a goal today. We lost the ball too easily in the first half, so we had to be more composed with the ball. It felt like we were rushing our plays a bit. We need to address how we conceded and what led to that play. We must learn from our mistakes and try to improve as a team and as an individual. That was probably the only opportunity we gave up throughout the entire match, so that makes it even more regretful. However, despite giving up the equaliser, we managed to stay positive and keep our composure. As we face stronger opponents down the line, we need to get stronger in the one-on-one situations, so that is an aspect I hope to improve on.

MF #13 HASHIMOTO Kento (FC Rostov)
In the scene where I scored the goal, I was able to keep my cool and aim for the corner, so I just focused on making good contact with the ball. It was great that I was able to score a goal, but I feel like I could have done a better job as a defensive midfielder to help the offence when the team was struggling in the first half. There were many scenes where I needed to make better adjustments, so that is an aspect I must improve on. It was my first time playing with Kawabe, so we tried to keep a good distance with each other, but we might have been overly concerned about keeping the balance. We hope to make the most of this experience to become a better team.

MF #21 KAWABE Hayao (Sanfrecce Hiroshima)
This was my first start, so I was a little nervous, but I entered the match focusing on the team concept. I might have started out playing too passively, but I am happy with my overall performance. Although we conceded a goal, we managed to keep our composure and retake the lead. I feel like I tried to pass the ball too much, as I could have mixed in some long balls to give our defence time to push up, so that is an aspect I need to work on. In the scene where I scored the goal, I was anticipating for my opportunity to pressure the GK, so I am glad it worked out. In order to earn a spot on this team, I need to continuously produce results, so I hope I can showcase another strong outing in the remaining two matches. 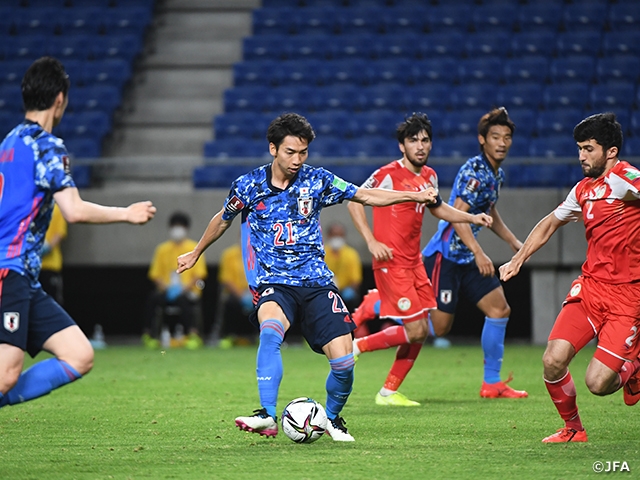 MF #11 FURUHASHI Kyogo (Vissel Kobe)
I wasn’t able to showcase a strong performance in our last match, so I was determined to produce results today. I wanted to give it my all, and I feel like I was able to do just that. More than anything, I am glad I was able to help the team win the match. The fact that I was able to play the entire match is a step forward for me, but there were times when I felt non-existent on the pitch, so I hope to be more involved and help the team create more chances in the final third. If I am given the chance to play in the remaining matches, I will make more runs for the team and commit myself to produce more results.

Usmom TOSHEV, Coach of Tajikistan National Team
This was a wonderful match for us, and I would like to congratulate Japan for their victory. Our players worked very hard to showcase a strong performance, and we had some good moments and some bad moments. But the biggest issue was that we lacked experience against a very strong team. It was great that we were able to score a goal against such wonderful team, and the fact that we were the first team to score against Japan at this qualifier gives us confidence ahead of our next match.