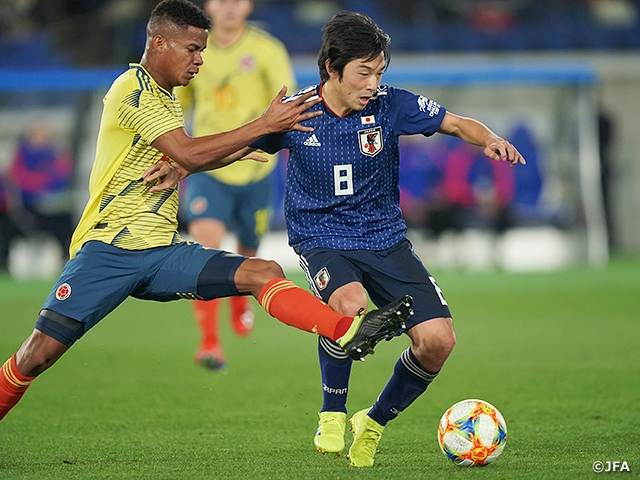 On Friday 22 March, the SAMURAI BLUE (Japan National Team) faced the Colombia National Team at Nissan Stadium, Kanagawa in the KIRIN CHALLENGE CUP 2019. After conceding a goal from a penalty kick conceded in the second half, Japan lost to Colombia 0-1, marking the first loss since Coach MORIYASU Hajime took over the team last September. It was also the first time the Japanese side was kept scoreless in 13 matches.

With the match being their first match since they finished as the runners-up at the AFC Asian Cup UAE 2019, Coach Moriyasu has started a new looking line-up to pursue his theme of “heightening the overall team level.” 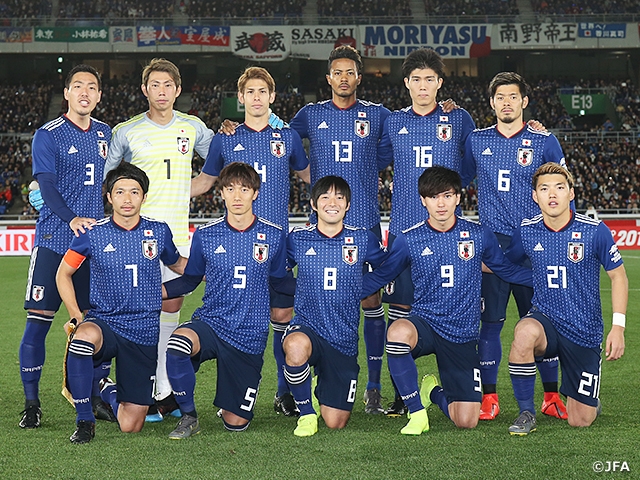 It was Japan who took the initiative of the match in the early minutes of the rematch between the two sides who faced each other at the group stage of the World Cup in Russia, as Nakajima and Doan led their attacks to threaten the Colombian goal.

While Nakajima forced numbers of turnovers in the midfield and distributed the ball to expand the field, Doan made multiple attempts by taking shots at goal. In the 34th minute, Minamino received a pass from Doan before making a turn in the penalty area to take a shot. Four minutes later, Nakajima delivered a cross to Suzuki where the striker connected with the ball to fire a header, but none of the attempts were good enough to find the back of the net.

For Colombia who are preparing themselves for this summer’s Copa America, this was their first match after welcoming Coach Carlos QUEIROZ, after the Portuguese coach took over the team following his regime with the Iran National Team.

Despite seeing very few opportunities created in the first half by the South American side, including the shots taken by Sebastian VILLA, Radamel FALCAO, and Wilmar BARRIOS, their attacks picked up the pace drastically in the second half.

Early in the second half, Villa and Falcao combined to threaten the Japanese goal, while Duvan ZAPATA was introduced to the match around the 50th minute mark to initiate more fast breaks for Colombia.

The deciding moment came in the 63rd minute, when Zapata’s shot went off the hand of TOMIYASU Takehiro (Sint-Truidense V.V.) to give Colombia a penalty kick. The shot taken by Falcao powered through the hands of the Japanese goalkeeper HIGASHIGUCHI Masaaki (Gamba Osaka) to shake the net and give Colombia the lead.

Now trailing by a goal, Coach Moriyasu granted KAGAWA Shinji (Besiktas J.K.) with his first cap since the World Cup. More substitutions followed for Japan, as INUI Takashi (Deportivo Alaves) and KOBAYASHI Yuki (SC Heerenveen) were brought in to the game on the 71st minute, followed by KAMADA Daichi (Sint-Truidense V.V.) in the 79th minute.

In the 77th minute, Tomiyasu responded to a corner kick delivered by Kobayashi to strike a header, but his attempt was saved by the opposing goalkeeper. Six minutes later, Nakajima tried his luck with a shot from distance, but his effort was denied by the cross bar.

After scoring the opener, Colombia retreated their lines to play more defensively, but their late substitute Luis DIAZ came close to doubling their lead when he forced a turnover in the midfield before firing a shot that struck the cross bar in closing minutes of the match.

Despite the final efforts made by Inui, Kobayashi, and Kagawa, Japan failed to score the equaliser and suffered a shutout loss with a final score of 0-1.

Japan will now make their ways to Hyogo to play their match against the Bolivia National Team on Tuesday 26 at Noevir Stadium Kobe. 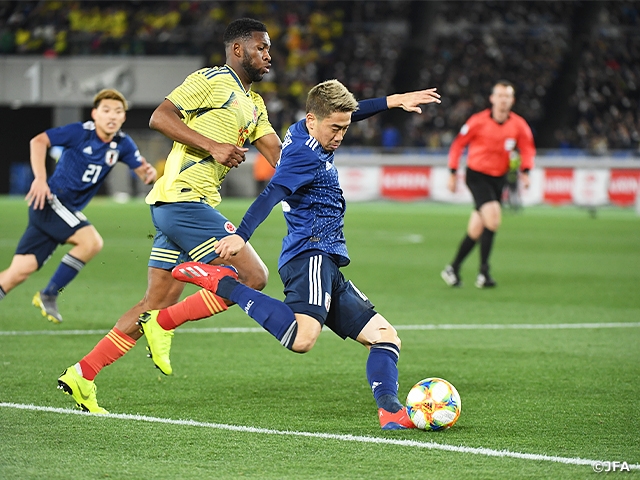 MORIYASU Hajime, Coach of SAMURAI BLUE (Japan National Team)
It was unfortunate that we couldn’t earn a victory in front of this huge crowd and the people watching us through the media outlets. Our players did a great job to apply aggressive pressure to force turnovers and created many opportunities in the first half. However, we weren’t able to capitalise on our chances and finished scoreless today. We saw a different match in the second half, as our opponents applied more pressure and forced us to be in the defensive end for a long stretch, which led us to concede a goal. We showed great intensity in the first half, but we must be able to maintain that intensity for the entire match. Despite the outcome, it was great to see our substitutes changing the dynamics of the match towards the end, as it really showed their quality in the limited minutes. We strived to earn a win by utilising numbers of players today, but we weren’t able to earn the result we were looking for. However, the players gave their best efforts until the end. We hope to be more critical in our opportunities and create more chances from our side attacks.

MF #9 MINAMINO Takumi (FC Red Bull Salzburg)
We created numbers of opportunities from short counters and finished our plays with a shot, but we weren’t able to do the same in the second half. There were some aspects we did well and some we did poorly. We hope to become able to make the adjustments on the pitch to win these kinds of matches.

MF #10 KAGAWA Shinji (Besiktas J.K.)
It’s very disappointing that we lost the match. With this being my first match under the new regime, there were many new findings. The team showcased quick and aggressive attacks in the first half and all of our players seemed very confident, which gave me great inspiration. It made me feel that if we keep on working hard, we can play even better football. With our opponents making the adjustments in the second half, we weren’t able to find our rhythm in the second half, but I think that the team really showed their abilities in the first half. In a match, there will be good stretches and difficult stretches over the 90-minute span. What’s important is how we face those tough stretches. We hope to analyse this match as a team and use it as a learning experience to improve ourselves.

FW #13 SUZUKI Musashi (Hokkaido Consadole Sapporo)
It was unfortunate to lose the match from a penalty kick, especially after playing a good first half. With the opponents applying high pressure, I was anticipating for my chance to exploit the space behind them. There was a play where our opponents came out to force a turnover in our half, and if we could’ve evaded that pressure, we would’ve gained a critical chance for ourselves. I will to continue to make the runs and anticipate for those opportunities.

Carlos QUEIROZ, Coach of Colombia National Team
We have analysed our opponents and entered the match with the understanding that Japan has great agility, speed, and techniques. Our approach in the first half was to contain Japan from being critical and attack when our opponents were tired in the second half. Japan can be very dangerous when they have the ball, but our players did a great job today. Our midfielders faced a tough match today, but this match has given us a great learning experience.