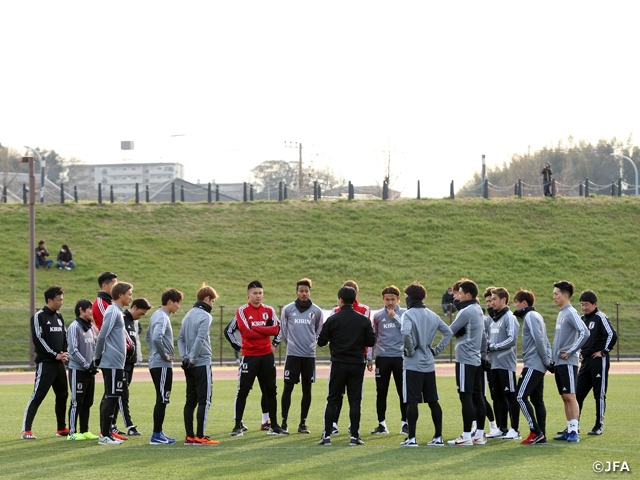 On Monday 18 March, the SAMURAI BLUE (Japan National Team) held their first training session in Yokohama ahead of the KIRIN CHALLENGE CUP 2019 matches against the Colombia National Team and Bolivia National Team, scheduled on Friday 22 at Nissan Stadium and Tuesday 26 at Noevir Stadium Kobe respectively.

The first day of the training camp saw 17 players gathered to conduct a light training session that lasted about an hour.

Midfielder KAGAWA Shinji (Besiktas J.K.) and defender SHOJI Gen (Toulouse Football Club) were among the players who got their call-up since last summer’s FIFA World Cup, as the players went through their warmup routines before conducting light drills with the ball. 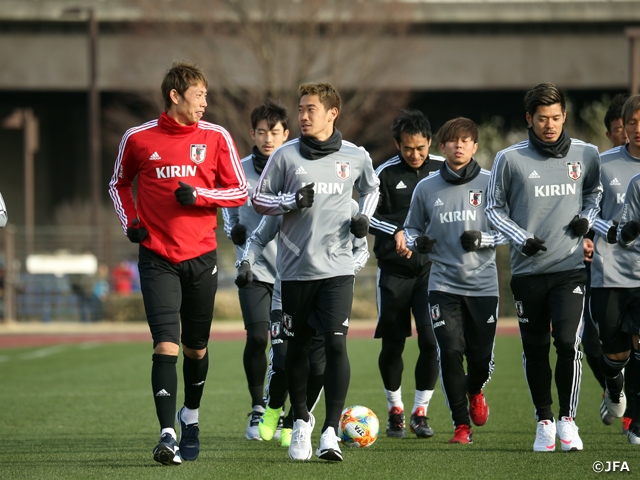 Following the session, USAMI Takashi (Fortuna Dusseldorf) was seen chatting with HIGASHIGUCHI Masaaki (Gamba Osaka) and MIURA Genta (Gamba Osaka) while passing the ball around on the pitch.

A precautionary measure was taken for midfielder MORITA Hidemasa (Kawasaki Frontale) who felt a discomfort in his right hamstring, as he took on a separate menu from the team to condition himself at the hotel.

Following their second-place finish at this January’s Asian Cup, Coach MORIYASU Hajime rotated 13 players from his roster. Ahead of today’s training session, the coach reminded his players, “The competition will get even more intense from here on. We must get stronger,” as he sets his eyes towards the FIFA World Cup Qatar 2022. The coach continued by stating, “I want you to earn positive results in the two matches scheduled ahead of us and showcase the bench strengths of the Japan National Team.”

Since taking over the helm of the team last September, Coach Moriyasu has not included Kagawa in his squad until now. However, from his experience as the assistant coach at the World Cup, Coach Moriyasu is fully aware what the midfielder has to offer for the team, as he mentioned, “I want him to be the mentor for the younger players with lesser experience.” Kagawa has recently transferred from Borussia Dortmund to Besiktas and made an impact in his new team by scoring two goals in his debut.

After spending his 30th birthday on the day before, Kagawa shared his aspiration, “We want to get off to a positive start ahead Qatar. This team will be tested in the next two matches, so we will work closely as a team and give our very best.”

Prior to the training session, the team’s official partner, Kirin Beverage Company, Limited of the Kirin Group offered their support, as the Metropolitan District, Yokohama Branch Regional Director SATO Eiji paid a visit to offer the team with “Nama-Cha” and “Kirin Lemon,” and Coach Moriyasu received the gift in behalf of the team. 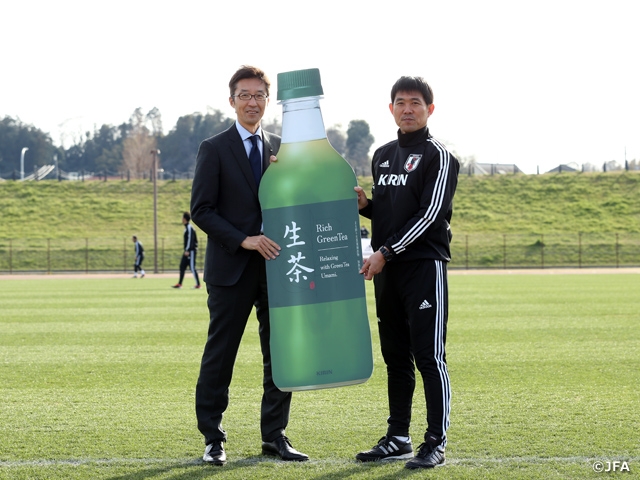 MORIYASU Hajime, Coach of SAMURAI BLUE (Japan National Team)
I told my players that the competition in Asia will get even tougher from here on, especially after seeing what happened at the AFC Asian Cup. We must become stronger as a team, and as a starting point, I want my players to challenge themselves to the fullest in the two matches of the KIRIN CHALLENGE CUP. I have rotated 13 players from the Asian Cup, but I want them to showcase the bench strength of the Japan National Team in the matches against Colombia and Bolivia. I am considering utilising two different line-ups for each match, but that is subject to change depending on the conditions of the players. We have two players for each of the midfield positions, so there are many possibilities we can try from. Each of the players have something special, and they are all professionals, so I want every player to play as if they are the team captain and play with aggression.

GK NAKAMURA Kosuke (Kashiwa Reysol)
I was watching the Asian Cup with the hopes that our team wins the title. Despite the eagerness shown by the team, the tournament ended in an unfortunate result. Hopefully my presence on the team can add some thing to the team. It’s great that I am called up to the national team, and I will continue to strive for a victory in both the national team and my club team.

DF SHOJI Gen (Toulouse Football Club)
In terms of age, I am probably at the median, so I hope to facilitate the communication between the older players and the younger players, as well as the players getting their first call-up to the team. My cap with the national team maybe much lesser than Kagawa, but I hope to utilise my experience to help out the team. I was thinking that if I can’t win the starting position at Toulouse, I wouldn’t be called-up by the national team, but there must be some aspects I’ve learned in France that can be implemented.

MF KAGAWA Shinji (Besiktas J.K.)
I must reset my mindset from the World Cup played in Russia to the next tournament in Qatar. While doing so, I hope to give back to the national team by sharing my experience to the current team. Competition among the team will always be there, regardless of either you are with your club team or with the national team. I hope to leave positive results with this team. As much as the next two matches are important, we still have plenty of time ahead of the World Cup in Qatar, so we must focus on the process and embrace each and every match that leads us to the tournament. We hope to heighten ourselves through the matches and build a strong team.

MF USAMI Takashi (Fortuna Dusseldorf)
Watching the national team from the outside, I was getting the impression that the midfield players were playing with great energy. Now that I am with the team, I hope to supplement my strengths to help the team get better. The Japan National Team is a team I always strive to be a part of. I am yet to prove myself to be on this team, so I will work from the bottom to earn my spot on the team.