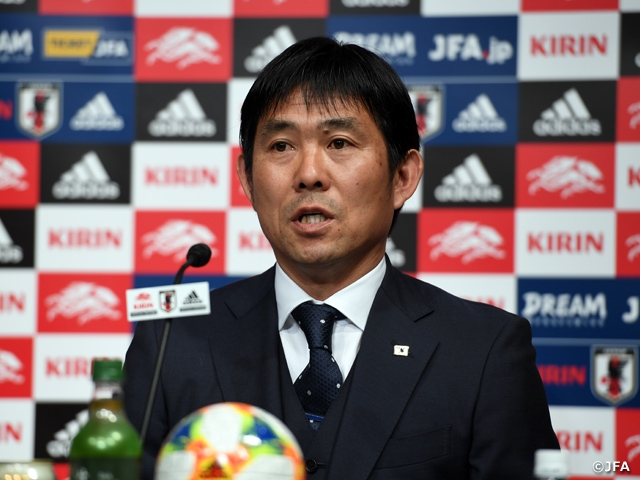 On Thursday 14 March, Coach MORIYASU Hajime of the SAMURAI BLUE (Japan National Team) announced the 23-man roster for the KIRIN CHALLENGE CUP 2019 matches scheduled in late March. The selected squad will face the Colombia National Team (Friday 22, Nissan Stadium) and the Bolivia National Team (Tuesday 26, Noevir Stadium Kobe). Midfielder KAGAWA Shinji (Besiktas J.K.) made his national team return since last year’s FIFA World Cup, while four players including SUZUKI Musashi (Hokkaido Consadole Sapporo) were called up to the team for the first time. Following their runners-up finish at the AFC Asian Cup UAE 2019 in January, the team has rotated 13 players from the roster.

The roster for the U-22 Japan National Team was also announced on this day, as the team will enter the AFC U-23 Championship Thailand 2020 Qualifiers in Myanmar, starting from Friday 22 March. A total of 23 players were selected, as midfielder KUBO Takefusa (F.C. Tokyo) was among those named into the squad.

With the roster of the SAMURAI BLUE seeing a drastic change, along with Kagawa, many players made their national team return since the World Cup held in Russia, as SHOJI Gen (Toulouse Football Club), YAMAGUCHI Hotaru (Vissel Kobe), USAMI Takashi (Fortuna Dusseldorf), and NAKAMURA Kosuke (Kashiwa Reysol) all made their names back onto the squad.

Midfielders NAKAJIMA Shoya (Al Duhail SC) and MORITA Hidemasa (Kawasaki Frontale), who were forced to leave the team ahead of the Asian Cup due to injuries, were both selected. Along with Suzuki, a total of four players were named for the first time, as KAMADA Daichi (Sint-Truidense V.V.), ANZAI Koki (Kashima Antlers), and HATANAKA Shinnosuke (Yokohama F･Marinos) got the call-up.

During the press-conference held at the JFA House in Tokyo, Coach Moriyasu explained the reason behind the drastic change, “By adding new players, we hope to heighten the base of the Japan National Team and ultimately give the team a better chance to earn positive results in our future competitions.” Regarding the members making their return to the squad since the World Cup, the coach explained that they have been out of contention due to injuries and timing with their clubs, but stated that, “They have already proven their ability to play. I had the intention to call them up when I have the chance.” 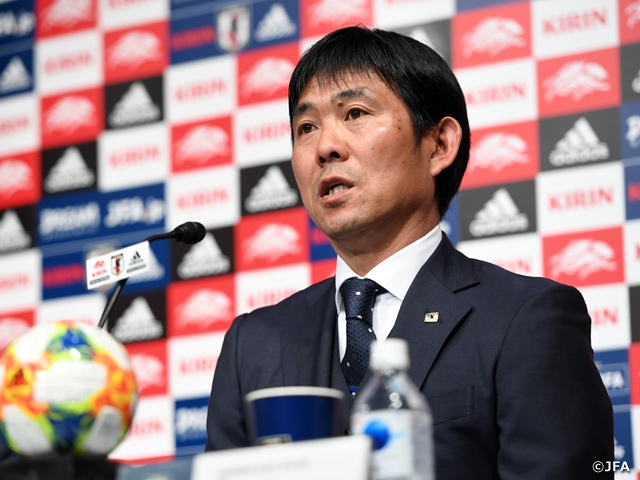 Japan will be facing the Colombia National Team, who they have beaten 2-1 at the group stage of last year’s World Cup, and the Bolivia National Team, who they haven’t faced since 2000. While Japan ranks 27th in the FIFA rankings, Colombia ranks 12th and Bolivia sits at 60th. With Japan being invited to play in the CONMEBOL Copa America held in Brazil this June, the two matches will provide the team with great opportunities to test themselves against the South American sides.

Ahead of the two matches, Coach Moriyasu started off by saying, “Of course we are playing to win,” and continued by mentioning his take on the matches, “They are both strong teams from South America. Through these two matches, we would like to find out where we stand, what we can do, and what we lack. It will provide us with a great learning experience.”

On the other hand, the roster of the U-22 Japan National Team, who will be entering the AFC U-23 Championship Qualifiers, included the 17 year-old phenom Kubo, along with MIYOSHI Koji (Yokohama F・Marinos), ITAKURA Kou (FC Groningen), NAKAYAMA Yuta (PEC Zwolle), and ITO Tatsuya (Hamburger SV).

Japan’s first match in Group I will take place on Friday 22 March, when they face Macau, followed by their match against Timor-Leste on Sunday 24, and third match against the host nation Myanmar on Tuesday 26. All the matches will be held in Yangon and Coach YOKOUCHI Akinobu will be the acting coach in place for Coach Moriyasu.

The qualifiers will be played by 43 teams divided into 11 groups. Top finishers of each group will automatically qualify to the next round, along with four of the top teams finishing as the runners-up. With the host nation Thailand already qualifying the tournament, a total of 16 teams will make their ways into next January’s AFC U-23 Championship Thailand. 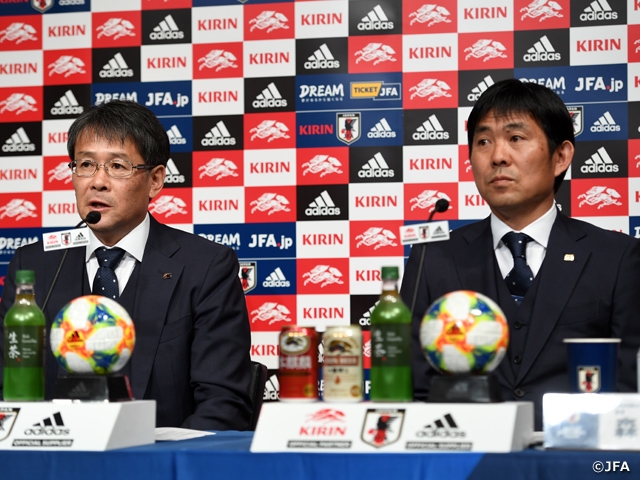 MORIYASU Hajime, Coach of SAMURAI BLUE/U-22 Japan National Team
I would like to thank everyone for supporting us during the Asian Cup. It was unfortunate that we finished as the runners-up, but the bitterness we experienced in UAE will certainly help the team get stronger. We will utilise the experience we gained at the Asian Cup to develop and strengthen the team ahead of our matches against Colombia and Bolivia at the KIRIN CHALLENGE CUP. By rotating multiple players from our squad at the Asian Cup we can broaden the base of the Japan National Team and give us a wider pool to select from in the future competitions. There are players who I omitted from this squad due to injuries and their situation at their clubs, but through the Asian Cup, they have already proven their ability to play.

I will be seeking for our players to heighten their ability to break through each situation with both their individual skills and collective combinations. We also must do a better job in keeping our offensive possession while evading the pressure from our opponents and be more critical at the final third. Winning the individual battles in defence will be another key aspect for our game. The team must stay on the same page when getting dominated by the opponents. The South American teams consists extremely high-level techniques, ability to effectively utilise their physiques, and great decision makings at the individual level. These are qualities we must learn and obtain, so I want the players and staffs to utilise these matches as a learning experience and input their experience to help, not only the national team, but the Japanese football community. In regard to the AFC U-23 Championship Qualifiers, I want the team to earn their spot into the main tournament and utilise the opportunity to help the team prepare for the 2020 Tokyo Summer Olympics.

SEKIZUKA Takashi, JFA Technical Director
Although we gave up the championship title to Qatar at the AFC Asian Cup in January, we still managed to showcase various styles through the seven matches we played. We hope to implement that experience to further develop the team. After experiencing the world standards at the FIFA World Cup, we are now striving to get past the round of 16 at the 2022 World Cup in Qatar under the helm of Coach Moriyasu. The Asian Cup has given us the impression that the teams who has been devoting their efforts in youth development has earned better results, so we will be focusing on youth development even more to strengthen the overall level of Japanese football.