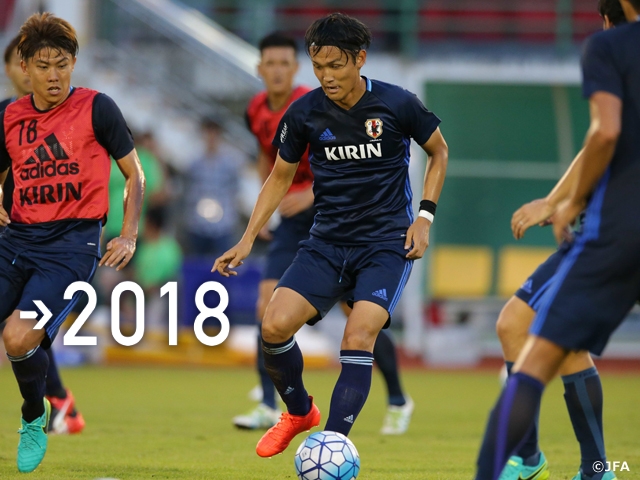 On Saturday 3 September, SAMURAI BLUE (Japan National Team) started their team workout in Bangkok, Thailand with three days remaining before the second match against Thailand in the Final Asian Qualifiers (Road to Russia) for the 2018 FIFA World Cup Russia.

The temperature was under 30 degrees on this cloudy day, while the humidity was rather high. Winds made it comfortable for the players who primarily focused on physical training in consideration of the conditioning after the traveling from Japan on the previous day.

The starters of the UAE match two days ago worked on 5-on-5 passing drills. The substitutes went through six-on-sixes with goalkeepers, HIGASHIGUCHI Masaaki (Gamba Osaka) and HAYASHI Akihiro (Sagan Tosu), under the supervision of coach Vahid HALILHODZIC. They focused on the swiftness in offence leading up to the goal, limiting the number of touches allowed on each play.

In the end, Midfielder KASHIWAGI Yosuke (Urawa Red Diamonds), who had been working separately, joined the 6-on-6 groups as a neutral player. Chasing the ball on the pitch after a while of absence had him work up a good sweat.

The last part of the session was spared for trunk training before finishing up the first practice in Bangkok.

Today's practice site of the Suphachalasai National Stadium was where Japan clinched in June 2005 the spot in the FIFA World Cup 2006 under coach Zico. The match was held with no fans in the stands due to an order by FIFA in the wake of rioting in the match organised in Pyongyang by North Korea against Iran.

Eleven years later, the stadium welcomed kids and family members of a Japanese school in Bangkok to have them interact with the national team including a group photo session before the practice.

While waiting for the team’s arrival, approximately 100 kids aged from 9 years old to 15 put up a banner they prepared with their hand-written messages. “Never lose, Japan!” “Win with all the power!” Then the visitors gave very a warm welcome to the players upon their arrival. Mr. MUROGA Kaoru, principal of Thai Japanese Association School recalled, “everyone was looking forward to this so much.”

On behalf of the whole team, captain and midfielder HASEBE Makoto (Eintracht Frankfurt) received a basket of flowers from one of the elementary school girls, and then with coach Halilhodzic and the Japanese Embassy's mascot ‘Muay Thaishi’ together, everyone shot a group picture. When the national team star players actually got closer to the kids for the photo, they couldn’t help but saying ‘wow’ out of their excitement.

The team are scheduled to continue their preparation for the Thailand match with a closed practice session on Sunday 4 September. 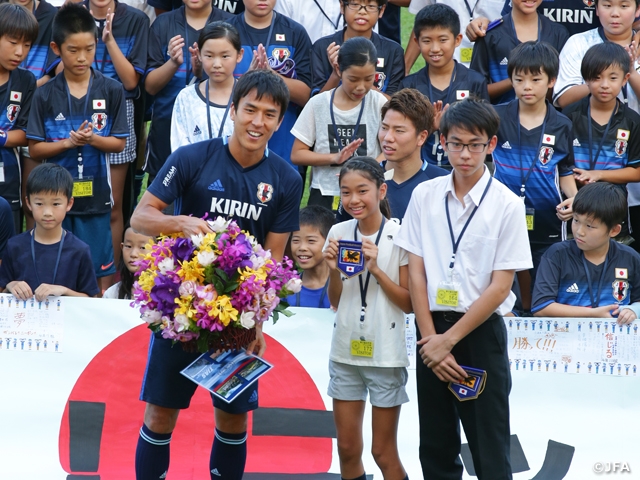 GK #12 NISHIKAWA Shusaku (Urawa Red Diamonds)
Now that we are here, I think everyone of us has already reset his mind. We lost in the first match, and I suppose everyone’s sense of urgency is now much stronger. As we have to accept the fact that it’s not easy any more to go through, we have to take one match at a time. Thailand are also a capable team and have quick-footed players upfront. So we have to have good risk management and organise ourselves. In the team practice from tomorrow, we want to keep working hard and gain good image for the Thailand match.

MF #21 SAKAI Gotoku (Hamburger Sport-Verein)
In the UAE match, although we created chances, we could not capitalise on them. (Thinking about) helping my team, I really want to attain good results myself, and it’s important to make sure our efforts end up in a goal.

In the match the other day, after getting the opening goal there were opportunities to score the second. But we failed to do so. That’s one of the reasons why we struggled to maintain our momentum. The level of other Asian teams has been improving, so if we do not score when we have the chance to do so, it will come back and haunt us. Personally, no matter who I play against and what kind of situation I am in, I want to obtain good results.

MF #10 KAGAWA Shinji (Borussia Dortmund)
In the UAE match, I realised there was some difficulty in finding the appropriate distance (among the players). We had it too crowded in the middle and our positioning sometimes overlapped with each other. Then we made some mistakes and allowed them to push up the field on a counter-attack.

There were stretches where we were required to use the entire pitch, broadening the width and depth of our plays. In addition, there were times where we should have change the pace, adding swiftness or slowing down dependent on the situation. Moreover, we needed to take advantage of our sides more and play it quicker with fewer touches when we really wanted to attack. These are some of the issues that have to be addressed prior to the next match.

There are things that work well in practice but not in the actual match. We worked on pressing the opponents which seemed to be effective during our practice, but not as effective in the match. We need to make adjustments during the match.

MF #4 HONDA Keisuke (AC Milan)
I have few offensive and defensive strategies of how to go about the game against Thailand. I have a clear image of how to break down their defence or rob their ball. We have no other choice but to aim to win all the remaining matches. Above all, we have to stay confident and maintain positive attitude towards upcoming matches.

There was pressure on us from the beginning, and we experienced even worse pressure than this before. We are going to face this straight on. I am even more stimulated learning the fact that no team have ever advanced to the World Cup after losing the first match of the final qualifiers. We just have to move on without worrying about that. I really feel that we are given the mission to qualify for the World Cup.