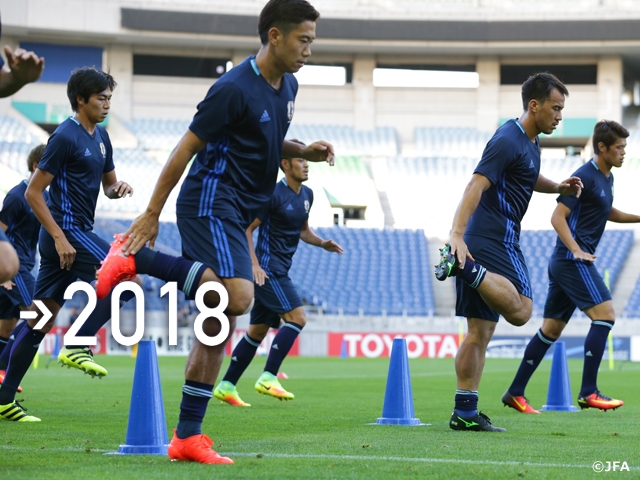 Vahid HALILHODZIC, the coach of SAMURAI BLUE (Japan National Team), who aim to book a place in the FIFA World Cup six times in a row, appeared at a press conference at Saitama Stadium 2002 on Wednesday 31 August, one day prior to the first game of the 2018 Final Asian Qualifiers (Road to Russia) against the United Arab Emirates (UAE). He commented: “it will be truly a vital step. We want to win this game and the game against Thailand (on 6 September).”

In the quarterfinals of the AFC Asian Cup in January 2015, Japan lost to the UAE on penalties after the score was 1-1 at the end of extra time. Although Japan’s record against them is 5 wins, 2 losses and 8 draws, the UAE reached the semi-finals in the 2009 FIFA U-20 World Cup and still have many players who experienced the London Olympics as of 2015.

Their strength – rapid attacks - starts from skilful midfielder OMAR ABDULRAHMAN, sending a pass to their potent forwards, ALI AHMED MABKHOU and AHMED KHALIL, who have the ability to find the space behind the defenders and break through the backline. The team held a two-month training camp in Spain and China before coming to Japan, using the pre-season period of the domestic league, which will start in the middle of this month.

Coach Vahid HALILHODZIC noted, bearing in mind their struggle in the first match of the second round of qualifiers against Singapore: “it is not going to be easy, but it is not easy for the opponent, either. We have the quality and experience. I am confident that the players will be able to control this game.”

He also noted: “small details can decide a game. Tactics, physicality, and especially mentality are essential aspects.” During the meeting prior to the session, the coach presented a Japanese flag, which was given via a broadcaster by the Japanese medallists of the Rio de Janeiro Olympics. The flag has messages from UCHIMURA Kohei, who led the team to gold in men's gymnastics and MIZUTANI Jun, who won the team silver in men’s table tennis and the bronze in men’s singles.

Coach HALILHODZIC said emphatically: “it’s a great gift. The players are getting highly motivated. We have to challenge everything and go for the win.” 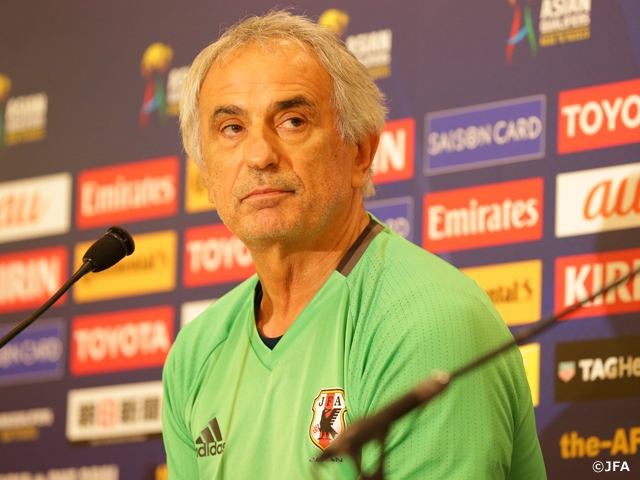 The team held a practice session to finalise tactics, which was closed apart from the first 15 minutes. Both midfielder KASHIWAGI Yosuke (Urawa Red Diamonds) and defender SHOJI Gen (Kashima Antlers) attended a separate session due to some discomfort in their legs.

Midfielder HASEBE Makoto (Eintracht Frankfurt), who has one match to go before getting 100 caps, noted: “we know the importance of the first game in any championship. I’m determined to win this home game. I’d like to be on the pitch with confidence, as we prepared as much as possible despite the short-time frame.”

The 12 teams will be divided into two groups in the final qualifying round, which will last until September next year, to play in a double round-robin tournament – a home and an away game. The top two teams in each group will book a place in Russia. The winner of the game between the third-placed teams in each group will play against the team in fourth place from the Confederation of North, Central American and Caribbean Association Football (CONCACAF) to earn the last spot.

The match between Japan and the UAE will kick off at 19:35 on 1 September at Saitama Stadium 2002. 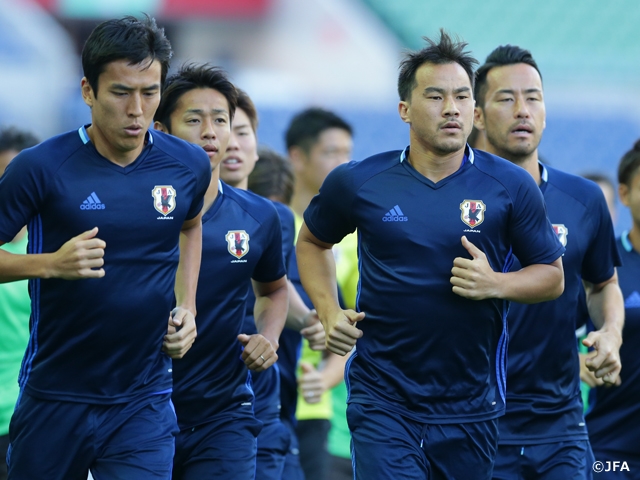 Vahid HALILHODZIC, Coach of SAMURAI BLUE（Japan National Team）
The UAE is truly a good team, and we were evenly matched in the past. However, we have been preparing well, working on various issues. I believe in the players and in their motivation and fighting spirit. As I heard the stadium will be filled to overflowing, I expect our supporters will encourage us a lot. We want to win this game and the game against Thailand. It is not going to be easy, but it is not easy for the opponent, either. We have to challenge everything and go for the win.”

MF  HASEBE Makoto (Eintracht Frankfurt/Germany)
When I’m on the pitch, I’d like to collaborate as much as possible with my partner (anchoring or working as a defensive midfielder) on the pitch, while showcasing my own skills. As the opponents have some strong players especially up front, we’ve been preparing to handle them accordingly. Even if the opponents perform differently, we’d like to stay flexibly and cope with them. Although I’m keen on pressing the opponents from the beginning, I’ll balance our play, as one of the opponents’ strengths is counter-attack.

FW  MUTO Yoshinori (1.FSV Mainz 05/Germany)
I believe it’s vital to strike the opener. I will play to win, so that we can build up positive momentum. If I play, I’d like to assist or strike a goal, which will surely bring some advantage for Japan. I’ve never been as ‘hungry’ for goals as I am now. So I’d like to show it. I really look forward to the match, as my condition is getting better.

FW  KOBAYASHI Yu (Kawasaki Frontale)
I think the UAE is a strong team with some talented players. As there are players, who are excellent at finding the space behind the defenders and breaking through the backline, it’s essential to eliminate the opponents’ passing course. We can get through with our speed. So if I’m on the pitch, I’d like to go behind the opponents and create scoring opportunities.

MF  ENDO Wataru (Urawa Red Diamonds)
As I’m not a starter in this national team, I’d like to showcase my ability in practice sessions as well. I’d like to contribute to the team whenever I’ve got an opportunity to be on the pitch (at any position), using my strengths. I am certain that I can improve myself, if I can perform under the pressure of the final qualifiers.

GK  HIGASHIGUCHI Masaaki (Gamba Osaka)
There is no easy game in the final qualifiers, and a single goal can decide a match. If a goalkeeper makes a frivolous error, we cannot win a game. So I feel even more responsible (than the outfielders on the pitch).

MAHDI ALI HASSAN, Coach of the UAE National Team
Tomorrow is going to be a big match. Although I expect it to be tough for both teams, we hope to get a positive result, building momentum for the qualifying round. The 2015 AFC Asia Cup was a year and 8 months ago. We only look into the future. We’ll perform our best for our dream, qualifying for the FIFA World Cup.