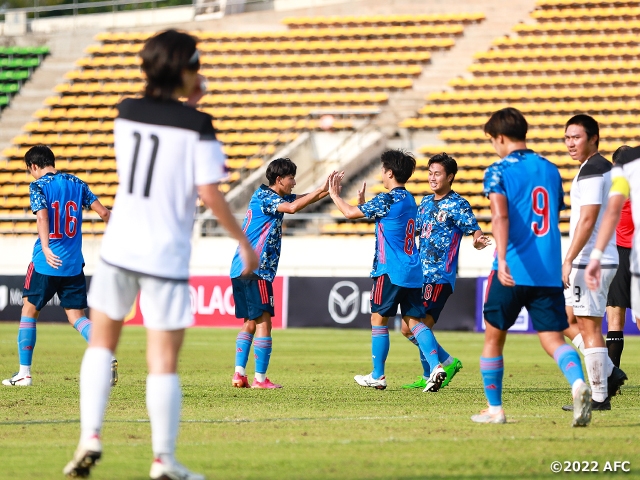 The third fixtures of the AFC U20 Asian Cup Uzbekistan 2023™ Qualifiers took place on Wednesday 14 September. In Group C, the U-19 Japan National Team faced the U-19 Guam National Team at the New Laos National Stadium.

With the team playing their second match in three days, coach TOGASHI Koichi rotated his entire squad, sticking to his words before the tournament “We really need to compete as a team.”

“Age does not matter. I want him to showcase his leadership on the pitch,” said the coach, regarding his decision to name HARUNA Ryusei (Cerezo Osaka U-18) as their starting goalkeeper and game captain. YASHIKI Yusei (Oita Trinita), TAKAI Kota (Kawasaki Frontale U-18), KUDO Kota (Urawa Red Diamonds), and KUWAHARA Rikuto (Gamba Osaka Youth) formed the defence line, with YASUDA Kenshin (Oita Trinita U-18), FUKUI Taichi (Sagan Tosu), and KUMATORIYA Issei (Meiji University) placed in the midfield. NAKAMURA Jiro (Gamba Osaka) and NARAHARA Yoshiki (Sagan Tosu U-18) were positioned in the flanks with CHIBA Kanta (FC Imabari) playing as the lone striker.

All 11 players were given their first start of the tournament and showed great intensity from the outset. Facing an opponent who started a five-back formation, Japan scored the opening goal in the 13th minute, when Nakamura displayed a superb individual effort to dribble past three defenders before curling a shot into the far side, as he later reflected, “My body moved exactly how I wanted. It was a perfect play.” 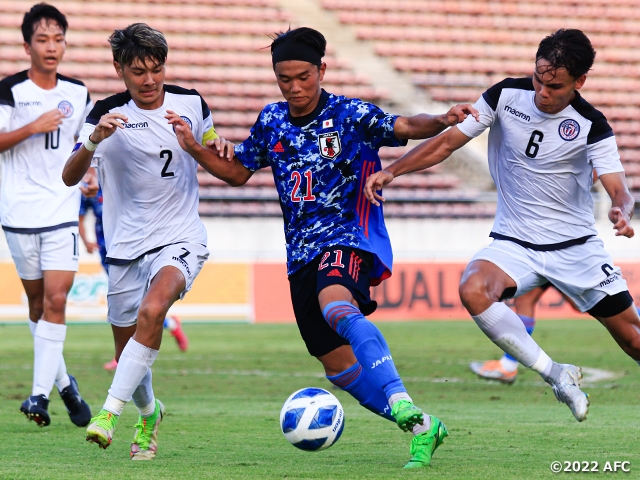 With momentum on their side, Japan went on a goal spree, as Narahara, Chiba, and Nakamura each scored a goal in the 15th, 30th, and 35th minutes respectively, before Chiba scored his second goal in the 45th minute to make it 5-0 at halftime.

“I was fully determined to leave results today,” said Chiba, who joined the team as an additional call-up. Staying true to his words, the striker put on a show in the second half, scoring goals in the 56th, 86th, 88th, and 90th minutes to record a double hat trick, which gave Japan a 9-0 victory at the end. 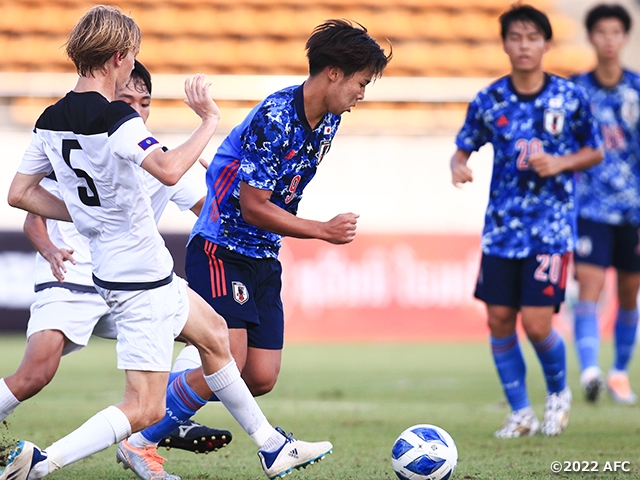 “We were able to test out a new approach against opponents with a five-man defence line,” said coach Togashi, as the team made bold challenges to test different strategies and players in the second half. The team will now face the U-19 Palestine National Team on Friday 16 September.

TOGASHI Koichi, Head Coach of U-19 Japan National Team
This was the second match for Japan and third match for Guam in this tight schedule, and condition-wise,
I think Guam had the tougher schedule. We focused on keeping the ball moving, make forward progress, and to win the ball back once we lost possession. We still have two more matches, which will get tougher and tougher as we play more matches. I am glad that we were able to score many goals while receiving zero yellow cards and with no injuries today.

MF #21 NAKAMURA Jiro (Gamba Osaka)
(Reflecting on his first goal) I was able to control the ball exactly how I wanted and execute my shot perfectly. However, despite the pitch condition, I lost possession of the ball on many occasions and lacked quality in my passes in the final third, so those are some of the aspects I must improve in the future.

MF #20 FUKUI Taichi (Sagan Tosu)
We knew how our opponents were going to play, so we focused on executing our game plan to create opportunities. I think the fact that we were able to score nine goals shows how well we played today. How I connect with Chiba was key for this match, so I made conscious efforts to target him when I delivered crosses. Facing an opponent who deployed a five-back formation, our team was on the same page to penetrate the flanks. 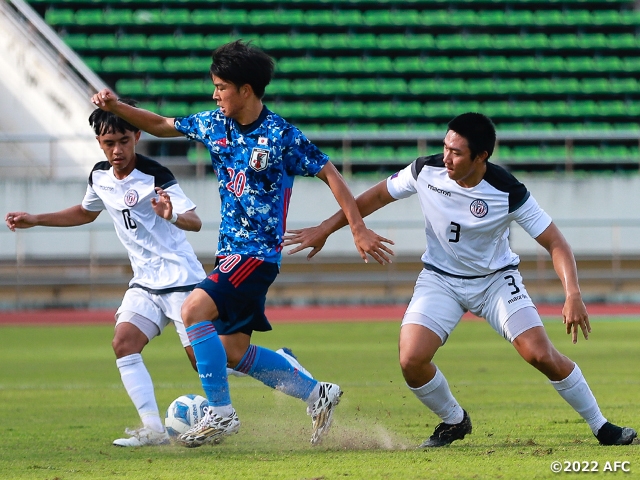 FW #9 CHIBA Kanta (FC Imabari)
I was able to respond to a loose ball to score my first goal, which is an important play for a striker. That goal allowed me to settle down and get into a groove. The goals I scored in the second half were created by the fresh players who came on as substitutes. Goals are more valuable when the matches are tight, so I hope to be prepared to capitalise on my opportunities when that moment comes.