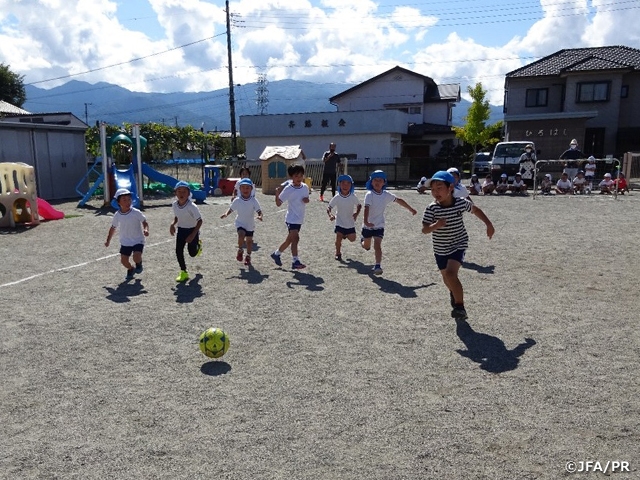 With the support of the Kids committees of each prefectural football association (FA), JFA has been holding “Traveling guidance” courses throughout the nation. The courses are held by the “Traveling guidance staffs” of each prefectural FA, where the staffs attend kindergartens, nurseries, and primary schools to provide various programmes for children to enjoy football. Joined by guidance staffs who specialise in coaching football, teachers who may not have the experience or knowledge to instruct football, are enabled to hold sessions to allow the children to exercise using the ball. Here we will introduce the traveling guidance activities that were recently conducted.

29 kids from the five-year old class took part in the event, which was held on a sunny autumn day. The kids were running around the playground before the class started, but when they saw the coaches, they welcomed them by saying “Good morning!” They quickly learned the names of the three coaches and took interest in everything, saying “look at me coach” every time they tried something new. The kids were actively involved in all activities from start to finish. At first, some kids could not play with the ball, but when we told them the magic word “Never give up,” they were able to do just fine. The teachers also participated actively and helped to make it a “fun, smiling, friendly, and fulfilling” class. 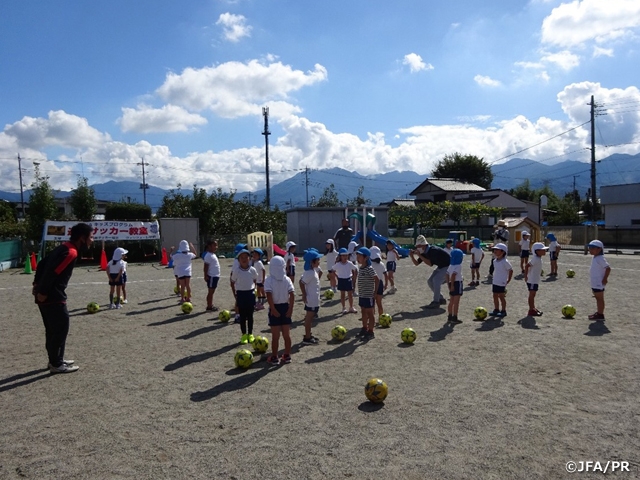 NEZU Kentaro (FA Traveling Guidance Staff)
The kids of Isawa Daiyon Nursery greeted us coaches with great energy when we arrived at the school, and they were very engaged in the activities from start to finish. Many of our friends loved to exercise and play football. I was very happy to see them challenge each drill with the magic word “never give up.” We played a scrimmage game at the end, which was very exciting, and the children showed their frustration when they lost, and their joy when they won. I still remember how energetic and committed they were to the end!

KURIBAYASHI Hidetoshi (FA Traveling Guidance Staff)
The kids tried many different tricks, and even when they failed, they didn't give up and shouted, “One more time!” In the last game, they chased the ball with all they've got and worked together to score a goal. I was surprised at how loud they cheered each other.

TAKAYAMA Yohei (FA Traveling Guidance Staff)
We were very impressed with how cheerful everybody was. Although most of them were not used to using their feet, they got better as we practiced each trick. In our last game, the kids got up quickly even after falling down and scored many goals with the dribble shots we worked on earlier. I was happy to hear the kids saying “I want to do it again” after the class was over.

Ms. SATOYOSHI Rie, Teacher
The kids are full of energy every day and we hope that they enjoyed the experience of playing football. The coaches talked to the kids in an easy to understand manner, and it allowed the kids to be absorbed into the class. The teachers also learned a lot from the coaches besides football. Thank you so much for a great time. 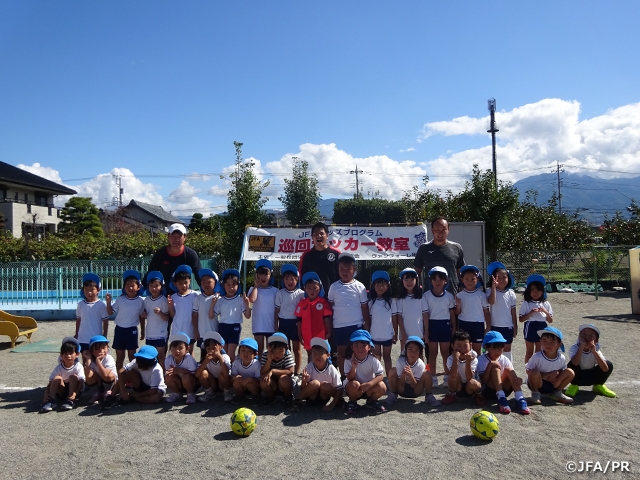