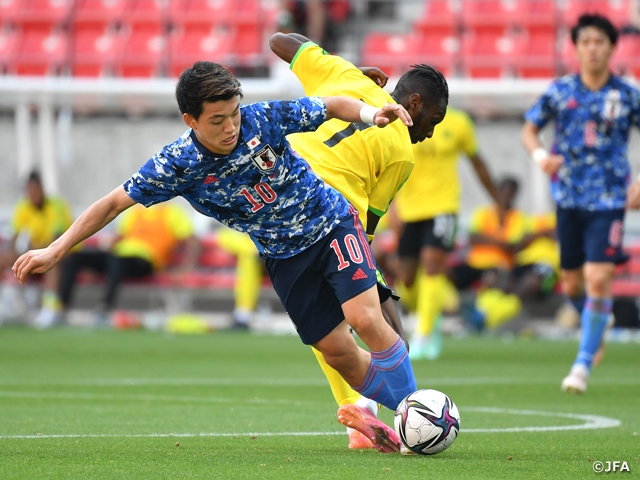 On Saturday 12 June, the U-24 Japan National Team, who is preparing ahead of the Tokyo Olympics, played in an international friendly match against the Jamaica National Team at Toyota Stadium (Aichi).

For the U-24 Japan National Team, this match against the senior squad of the Jamaica National Team represented the final match before the announcement of the 18-player roster for the summer Olympic games, concluding all activities that took place since 31 May. Although limitation did apply for this match, fans and supporters were allowed into the stadium, sending warm applause, and posting enthusiastic banners to lift the spirts of the players.

In addition, JFA invited 11 children with hearing impairments and their families (20 in total) to this match as part of the association’s “Football experience that leaves no one behind” project. This was made possible with the support of fans and supporters through the online crowdfunding service “KASSAI” which took place during the “SAISON CARD CUP 2021” in March. 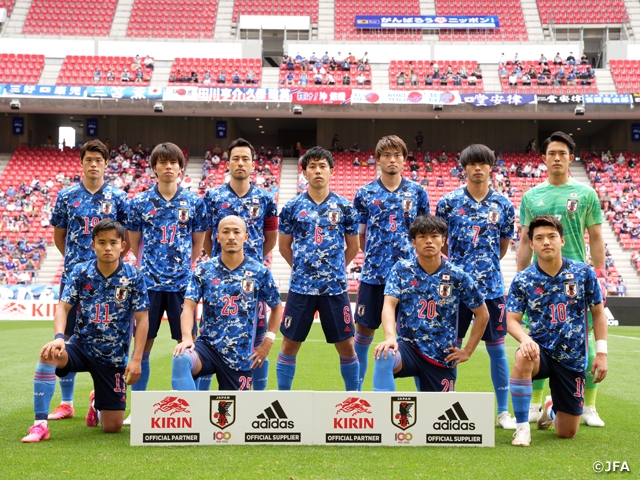 The match started with Japan taking the initiative, as the attacking players applied aggressive pressure from the early minutes, while the fullbacks filled the gap in midfield to deny the opposing side from creating opportunities.

The opening goal came for Japan in the 32nd minute, when Kubo broke away from a fast break on the right and threaded the ball between the legs of four Jamaican players including the goalkeeper to give his side the lead. With the goal coming from a quick transition made by Japan, the 20 year old midfielder commented, “It wasn’t anything special, we were just quicker on the transition.” 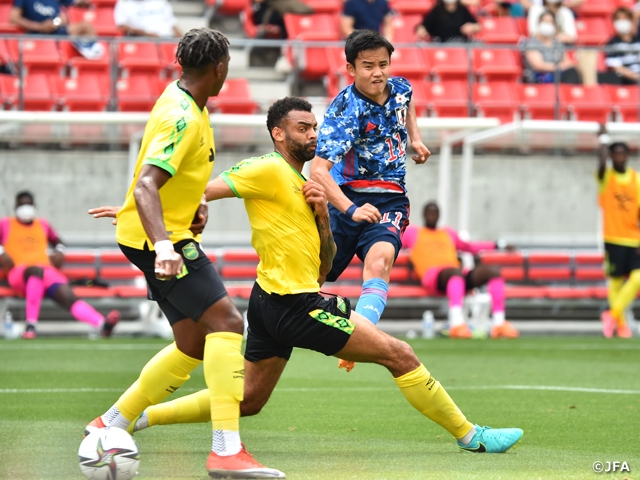 In the 42nd minute, Endo who is on the squad as one of the over-age (OA) players, received the ball at the edge of the box and curled the ball into the far post, doubling the Japanese lead before halftime. Japan carried their momentum into the second half, as UEDA Ayase (Kashima Antlers) and Doan scored a goal apiece to extend the lead, while the team tested their three-back formation with SEKO Ayumu (Cerezo Osaka) being added to their defence line. 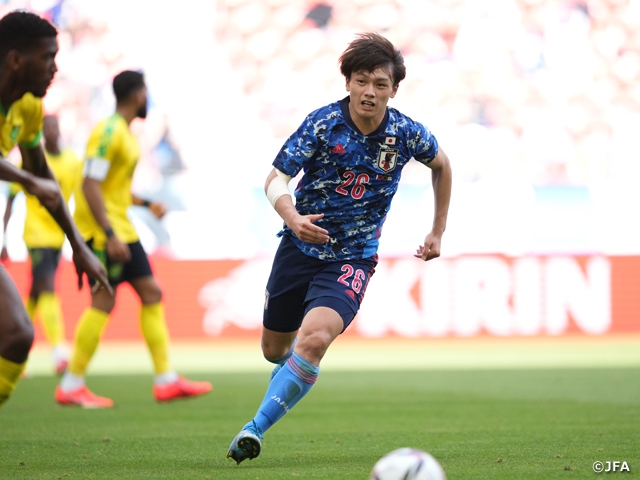 With his side earning a 4-0 shutout victory over Jamaica, coach Yokouchi mentioned after the match, “The players have worked extremely hard for the team on and off the pitch, and I thank them for that.” And continued to state, “However, we must now make a decision to finalise the roster. Unfortunately, we cannot take everyone to the Olympics.” The coach went onto leave a message towards his players, “All of these players are candidates for the future SAMURAI BLUE. Even if they are not selected for this Olympics, I want them to keep their head up and strive to become a member of the national team.”

YOKOUCHI Akinobu, Coach of U-24 Japan National Team
Compared to when we first started playing as a team, the players have become able to communicate much more. Everyone has worked extremely hard, and their efforts were being reflected on the pitch. The players are more aware of each other’s characters and started to mesh really well. I will be talking with coach Moriyasu regarding the final roster once the SAMURAI BLUE is done with their activities.

MF #7 MITOMA Kaoru (Kawasaki Frontale)
I was eager to produce results, but I wasn’t caught up by that thought. (Reflecting on his assist) Ueda made a wonderful run, so all credit goes to him. Not to mention that the goal was initiated from Seko’s pass, too.

MF #10 DOAN Ritsu (DSC Arminia Bielefeld)
Jamaica played with higher intensity than Ghana. We were able to score the opener during a tough stint, so that goal was huge for us. Once our opponent ran out of gas, we were able to take advantage and score our third and fourth goal. My goal came from a great delivery from Soma, and it allowed me to enter my vacation on a high note.

MF #11 KUBO Takefusa (Getafe CF)
(Reflecting on his goal) When I drove inside, I tried to aim towards the far side, because my previous shot went near side and hit the goalkeeper. The first nutmeg was intentional, but the rest was not intended. We will now be on our own, as we wait for the announcement for the final roster. Just like everyone else, I feel like I did everything I could, so we will see.

MF #14 SOMA Yuki (Nagoya Grampus)
We knew Jamaica was going to try to connect passes, so I was anticipating on applying pressure against them. When I assisted the goal, I was initially trying to dribble past the goalkeeper, but I couldn’t, so I made the decision to pass the ball to Doan, who was in a great position. I feel that I was able to choose the high percentage play in that moment.

FW #26 UEDA Ayase (Kashima Antlers)
We were facing the senior squad of the Jamaica National Team, so I knew I had to raise my intensity level and play aggressively in order to keep up with the opponents. When I scored the goal, I was able to make that run because it was Mitoma who had the ball in that situation. I have played with him for a long time, so I knew he was going to pass the ball there. I am glad I was able to execute that shot.