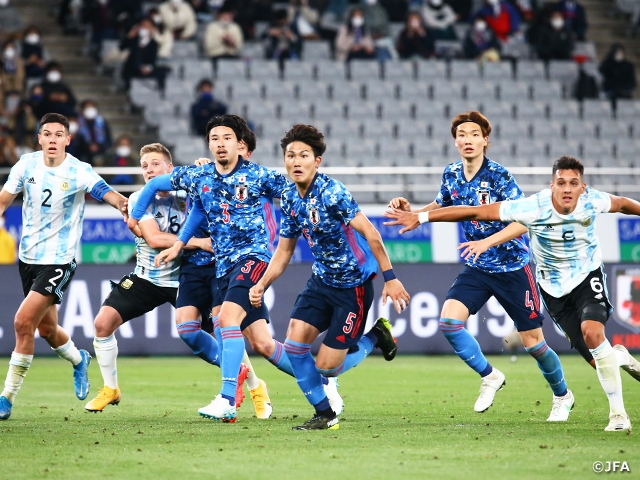 On Friday 26 March, the U-24 Japan National Team faced the U-24 Argentina National Team in the SAISON CARD CUP 2021. After conceding the opening goal in the first half, the young-samurais fell short from scoring the equaliser, dropping the first fixture against the South American side 0-1. 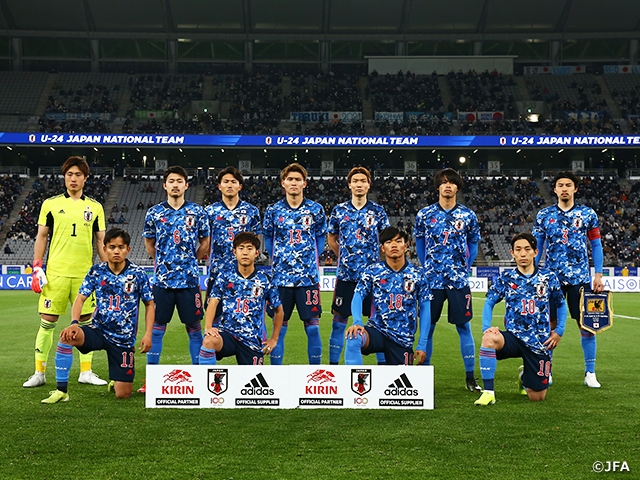 The match started with both sides showing great intensity. Japan created an early opportunity in the sixth minute, when Tagawa intercepted the ball and passed the ball to Sugawara who made an overlapping run down the right flank, before sending a cross towards the goal, but no one was able to convert the delivery.

Despite the early chances created by the home side, it was Argentina who took the initiative in this match. After seeing the South American side exploit the space behind the Japanese defence line through effective use of long balls, the opening goal came in the 21st minute, when Adolfo GAICH converted a cross sent by Matias VARGAS to find the back of the net.

Although conceding the lead, Nakayama and Itakura led the way to motivate the Japanese side, allowing them to gradually pick up their pace. Tagawa came close to scoring the equaliser in the 32nd minute when he struck a powerful shot from outside the penalty area.

The second half saw the Japanese side taking control of the ball possession, as Itakura later reflected, “We tried to push up our defence line, keep the midfield compact, and apply pressure to the opponent’s defence line.” By applying more pressure from their frontline, Japan managed to force more turnovers, and utilised the width of the field to keep the ball moving when they had possession of the ball.

However, despite creating more chances in the second half, Japan struggled to find ways to score the equaliser. Watanabe Tsuyoshi struck a header in the 75th minute, followed by Kubo’s shot taken in the 80th minute, but both attempts fell short from capturing the target.

Despite showcasing a more promising second half, Japan failed to score a goal, losing the match 0-1.

The two teams will now travel to Fukuoka and play another fixture on the 29th. 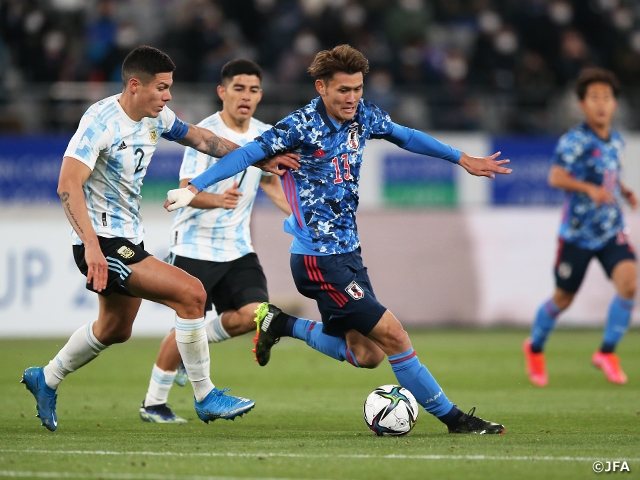 YOKOUCHI Akinobu, Coach
We played to win the match, so this is a disappointing result. On paper, we knew what we were up against, but when we actually took the field, we struggled to make the adjustments. We played well in the second half, as we managed to apply more pressure and keep the ball moving when we had possession of the ball. This match gave us the opportunity to face play styles we don’t often see in Japan. It wasn’t our first time facing a South American side, but Argentina was a very smart team who knew exactly what to do in each situation. I am sure our players are also disappointed from this result, so we will try to make the most of this loss and prepare for our second match.

DF #4 ITAKURA Kou (FC Groningen)
As a team aiming to win the gold medal at the Olympics, this was a match we had to win. In that sense, the result speaks for itself. Although we had moments where we controlled the match, we conceded from a single opportunity, failed to convert our own opportunities, and ended up losing 0-1. Argentina had the upper-hand in terms of one-on-one situations, so that is an aspect we must improve on.

DF #6 SUGAWARA Yukinari (AZ Alkmaar)
The fact that we were able to put up a good fight against a South American powerhouse gives us great confidence moving forward. We were also able to learn what went well and what we lacked in this match. There were definitely both good and bad aspects, but overall, this match will help us improve ourselves ahead of the Olympics. This result is disappointing, but we still have one more chance to redeem ourselves.

MF #10 MIYOSHI Koji (Royal Antwerp FC)
It felt like our opponent had the upper-hand in terms of the small details. Earning a victory was our highest priority for this match, so we must acknowledge that we failed to accomplish that goal. We did manage to create many opportunities, so if we didn’t concede that opening goal, this match could have been a much closer match. Despite the loss, we feel like there were many aspects that were effective, so we hope to make the most of this experience to win the second match. 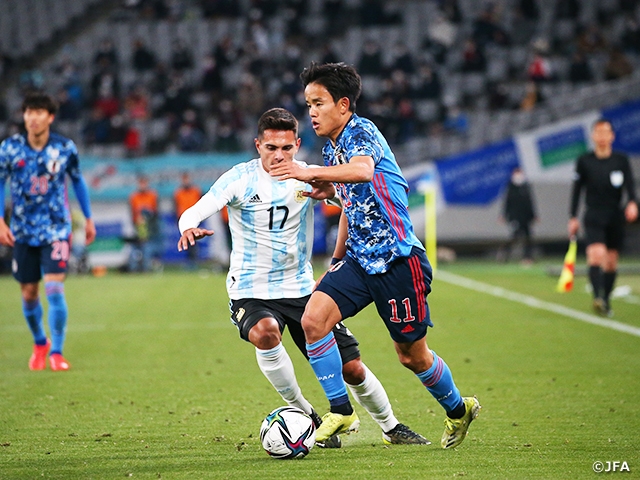 MF #11 KUBO Takefusa (Getafe CF)
We are not satisfied with this result, but we did find out that we can contend against strong opponents like Argentina. Both sides had their moments, and while our opponent capitalised on their opportunities, we failed to do the same, which makes a world of difference. From now, we must thoroughly prepare ourselves, so that we can finish this two-match series on a high note.