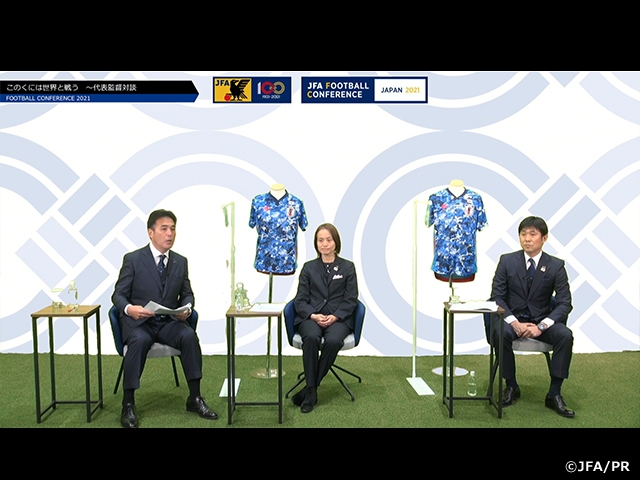 “The 12th Football Conference” was held for three days starting on Saturday 9 January 2021. With 2021 being JFA’s 100th anniversary year, the conference was held with the theme, “The future of football of our country”. In efforts to prevent the spread of COVID-19, all programmes were held online.

Subtopic “A ball that was brought to our country”

After overcoming such “winter era”, the Nadeshiko Japan became the world champion at the FIFA Women's World Cup 2011™. Ms. TEZUKA spoke about the positive impact this event had for the players that followed, “It allowed us to feel that we can compete at the world stage and strive for the world title”.

The WE League will start in 2021. Chair OKAJIMA shared her aspiration for the new league, “We hope to make this a league that drives women empowerment in Japan. We want the WE League players to become role models, so we hope coaches of women’s football teams will bring their players to watch the matches”. 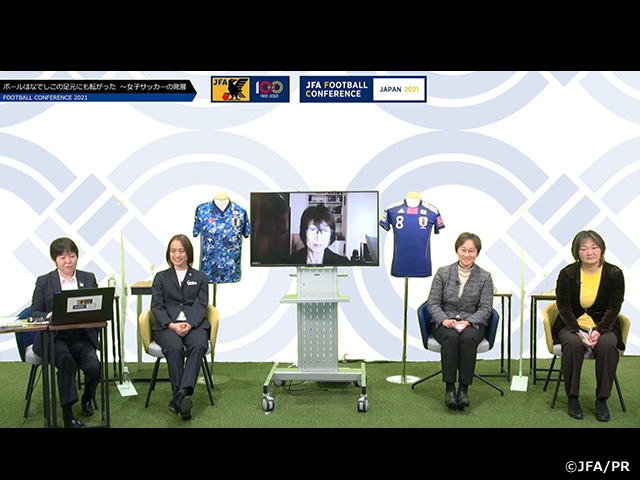 The tireless efforts made by each person in charge have gradually reformed the game, and in recent years, players who have benefited from these changes have started to thrive at the world stage. The voices of such players were also introduced during this session.

Regarding the competition environment, MUROYA Sei (Hannover 96/Germany) reflected on his time from high school, “Aomori Yamada High School (where he attended) was a team that was expected to win at the Price League. During my second year in high school, the Premier League started, which allowed us to compete against the top teams of the Kanto region, so that had a huge impact”.

Also, when asked about their encounter with football, SHIBASAKI Gaku (CD Leganes/Spain) mentioned, “I scored a lot of goals in the first training session I attended. It was so much fun that made me think ‘I want to practice again’, and I became devoted to it”. KUBO Takefusa (Getafe CF/Spain) also shared his encounter with football, “I was kicking the ball as far back as I can remember, and I haven’t left football until now”.

As for regional development, training centres and JFA Academies were reformed, allowing players such as JFA Role Model Coach Uchida Atsuto, who was born on 27 March, to be selected through the “Early birth (children born between 1 January and 1 April) selection”, that was carried out as part of the development programme. According to Mr. ONO, Coach UCHIDA has mentioned that “Without that programme, I wouldn’t be here today”.

We are still halfway toward the goal advocated in the JFA Declaration, 2005, which states the following, “We will host the FIFA World Cup in Japan, and the Japan National Team will be the Champion”. To conclude the session, Mr. SHINDO commented, “We still have many things to do. It is important that we continue to strive for higher standards while improving the roadmap”. 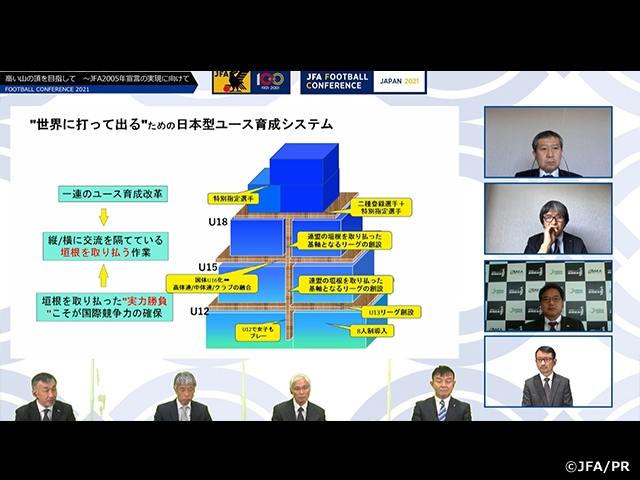 While explaining the global trends, Mr. ROXBURGH described Japanese football as a “cherry blossom tree” and asserted that the cherry blossoms can be in “full bloom”. To conclude the session, the Scottish director gave words of encouragement towards the Japanese football community, “Keep your love and passion for football. Your efforts will lead to great success in the world”. 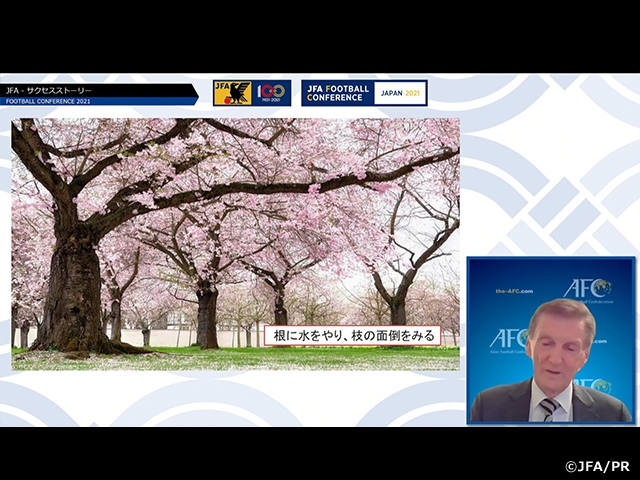 The final session of the day featured the theme, “Our Japanese Experience”, where an online talk session was held between Mr. Arsene WENGER, FIFA Chief of Global Football Development, and Mr. Holger OSIECK, FIFA High Performance Expert, who have both coached in Japan in the past.

Regarding their first impression of the strengths and weaknesses of Japanese players, Mr. WENGER mentioned, “They were devoted and had strong desire to improve”. The former coach of Nagoya, continued by sharing an episode, “I even had to hide the balls because they came before practice to kick the ball”.

Mr. OSIECK followed by sharing his thoughts, “They had great techniques and mobility, but they were also naive”. Reflecting on his years at Urawa, he continued to mention, “There were foreign star players on the team, and the Japanese players were able to absorb the experiences they gained from them”.

When asked for advice towards the active coaches in Japan, Mr. WENGER said, “Coaches must be tolerant towards everyone. How you use the readily available information, how you understand the basic ideas, and how you convey that information to the players. These are some of the qualities you will be asked to have as a coach”.

To answer the question, what Japan should do to reach its full potential in the next 10 to 20 years, Mr. OSIECK said, “Many players are currently playing at the top level in Europe at a young age, and their presence should have a positive influence on Japanese football. There is a need to implement that experience and mature the overall level to the world level”.

At the end of the session, Mr. WENGER shared his aspiration towards the Japanese football community, “Japan has love and respect. I hope they will achieve great things in the next 100 years”. 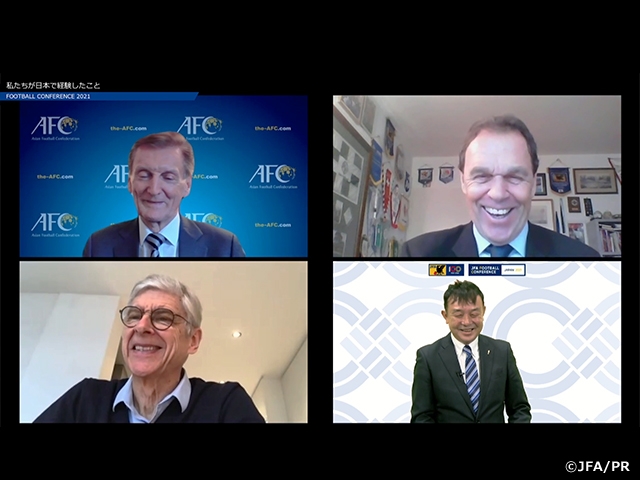 Subtopic “..and the ball keeps on rolling toward the future”

On the final day, sessions shedding light to the future were held, starting with a session titled, “We compete in the world: Discussion by National Team coaches”. With Coach KAGEYAMA Masanaga of the U-20 Japan National Team taking the role as the navigator, an interview between Coach TAKAKURA Asako of the Nadeshiko Japan and Coach MORIYASU Hajime of the SAMURAI BLUE/U-24 Japan National Team was held.

Due to the effects of COVID-19, the activities of the national teams were considerably limited in 2020. Despite the circumstance, the SAMURAI BLUE played two friendly matches each in October and November, as Coach MORIYASU evaluated, “We were able to play against strong teams with high intensity and quality”. The Nadeshiko Japan also held domestic training camps during the same period, as Coach TAKAKURA reflected, “I embraced the joy of playing football and gained energy from my players. The young players showed great awareness that they too must lead the team, and it became a very meaningful training camp for us”.

Interesting data regarding duel ratios were presented during this session. Comparing the number of duels won by the SAMURAI BLUE and the top eight nations at the 2018 FIFA World Cup Russia™, the numbers were almost identical during the first 60 minutes of the match, but the results showed that the SAMURAI BLUE was significantly inferior after the hour mark. In particular, the team showed tendencies to lose duels on both sides of the midfield and in front of their own goal, allowing the opponents to penetrate the flanks and deliver the ball towards the goal to create opportunities. After observing the data, Coach MORIYASU mentioned, “We must find ways to sustain the performance we showed in the first 60 minutes for the entire 90 minutes. It is important that we take control of the midfield and prevent the opponents from carrying the ball in front of our goal”.

For Nadeshiko Japan, data from FIFA Women's World Cup 2019™ was introduced. It showed that their pass completion rate was the highest among the 24 participating teams, but their duel win rate ranked 21st. In addition to increasing this number, Coach TAKAKURA said, “How to create more opportunities in the attacking third is our future theme”.

At this point, Coach Bruno GARCIA of the Japan Futsal National Team also made his appearance online. Regarding his team’s tasks, he mentioned, “To be more aggressive to take on the opponent one-on-one, improve the win rate, and increase our willingness to duel”. It seems that the win rate in duels has become a common challenge for Japanese players, regardless of gender, and in both football and futsal.

When asked about their aspirations for activities after this year, Coach GARCIA mentioned, “We will work tirelessly towards our goals in all categories”, while Coach TAKAKURA commented, “We will strive to reach higher levels while overcoming our challenges”. Coach MORIYASU concluded the session by stating, “We will improve on our weak points while we strive to achieve our goals using our strong points. We hope to earn results that can make all coaches, players, and people involved proud at the Tokyo Olympics and the Qatar World Cup”. 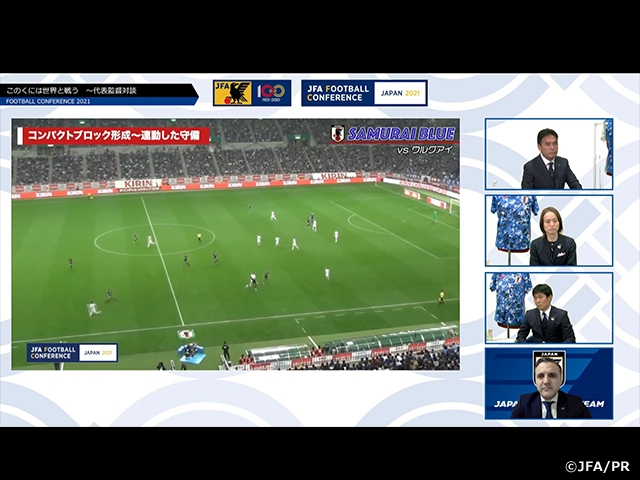 JFA is aiming to increase the number of professional contract players at the age of 17, and to strengthen players of the post-youth category (18 to 21 years old), as Mr. SORIMACHI shared his perspective, “In order to strengthen the national team ahead of the 2024 Paris Olympics and the FIFA World Cup 2026™, which will be jointly held in the USA, Canada, and Mexico, we must produce numbers of exceptional players who are capable of leading the future of Japanese football”. 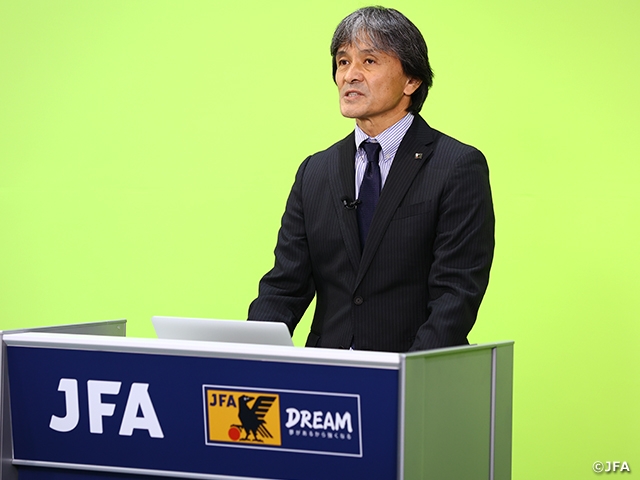 With the ball being handed back to Mr. SORIMACHI, the director concluded the session with his speech, “Through the ‘quaternity’ between strengthening, coach education, youth development, and grassroots, we hope to build a strong foundation. We may face various obstacles, but let’s give our utmost efforts to improve Japanese football”. 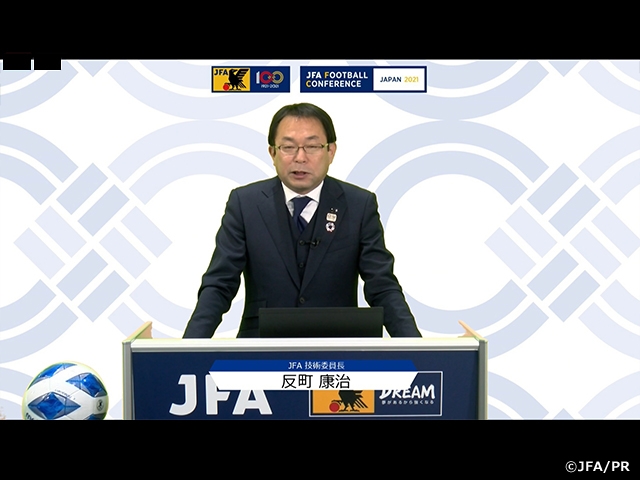 JFA President TASHIMA Kohzo made his appearance at the end, as he requested, “Mr. SORIMACHI, may I hold the ball, too?” With the ball being handed over to him, the JFA President started talking about the theme, “The future of football of our country, Japan”. While expressing his gratitude to those who have been involved in the century-long history of JFA, he reiterated that they will continue to strive to become “a country where everyone can enjoy kicking the ball, and a country where everyone can proudly support the national team”.

The 12th Football Conference came to an end as President TASHIMA introduced the phrase “DREAM Courage to Achieve”, which was announced at the time of “The JFA Declaration, 2005”, as he mentioned, “We will continue to devote ourselves to the development of Japanese football, and we appreciate your continued cooperation”. 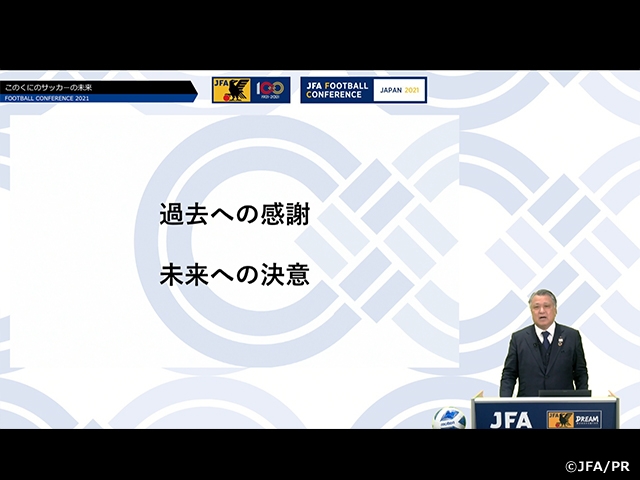