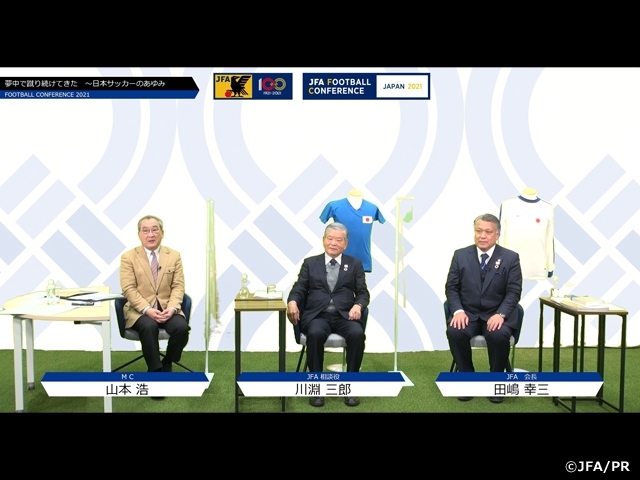 “The 12th Football Conference” opened on Saturday 9 January. In efforts to prevent the spread of COVID-19, all programmes were held online.

The first Football Conference was held in 1998 for coaches nationwide who hold the Japan Football Association (JFA) coaching license, and the conference has been held every other year since the second edition, which was held in 2001. In addition to sharing JFA's activities and the direction of Japanese football, by inviting lecturers from overseas, the conference provides a unique opportunity for Japanese coaches to learn global trends and activities carried out by each country.

With 2021 being JFA’s 100th anniversary year, the 12th edition of this conference will be held with the theme, “The future of football of our country”, where the “past”, “present”, and “future” of Japanese football will be discussed for three days. Football was brought to Japan more than 100 years ago, and it has been shaped into the current form of “Japanese football” by the efforts of many predecessors, and it will continue to develop while changing its shape. We would like to utilise this conference as a platform to share the history of how the foundation was built and the future plans with our football family.

To start with, JFA Technical Director SORIMACHI Yasuharu gave the opening speech, “Japanese football has evolved at a rapid pace, but we were not able to advance through the round of 16 at the 2018 FIFA World Cup Russia™. How can we reach a step further? This is our big challenge. We must think hard about what we must do and where we need to head towards”.

JFA President TASHIMA Kohzo followed with a speech on JFA, which is celebrating its 100th anniversary, “When looking back, there were many events that took place in the past 100 years. We must respect the history, and only through respect, we can build the next 100 years”. The three days conference kicked-off with the president’s statement regarding the identity of the Japan National Team, which consists of five keywords: pride, determination, unity, propriety, and responsibility, “This does not only apply to the national team players. I would like to share these qualities with all the participants here, and I hope that you will convey this awareness to the players you are coaching”.

The first day of the conference was held with the subtitle, “A ball that was brought to our country”, where the history of Japanese football was unravelled. Here JFA Executive Advisor KAWABUCHI Saburo and President Tashima took the podium, while former news caster Mr. YAMAMOTO Hiroshi facilitated the session, which featured the theme “We kept kicking the ball with passion: The development of Japanese football”. 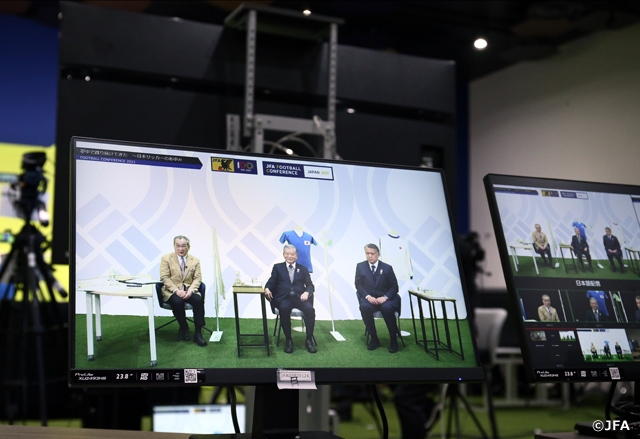 To start the session, the history of Japanese football was introduced through a film. Mr. Kawabuchi, who participated in the 1964 Tokyo Olympics as a player, and President Tashima, who was fascinated by football while watching the matches when he was in elementary school, talked about various episodes, including a “major topic to remember” which was regarding Mr. Dettmar CRAMER, who is considered to be the “Father of modern football in Japan”.

Mr. Kawabuchi, who was directly coached by Mr. Cramer as a player, shared episodes where they first met at a blessed environment of Duisburg Sportschule during a tour with the national team, his willingness to coach on uneven dirt fields in Japan, how he slept on the futon at the same hotel and ate meals such as raw eggs and grilled fish with his players.

“He became a part of us and made no complaints. He showed us what it takes to be a coach with every act. I have never seen a person with such integrity and a coach that can lead with examples like Mr. Cramer”.

President Tashima studied abroad at West Germany in 1983, where he relied on Mr. Cramer to study coaching theory at Leverkusen for two years. Mr. Cramer had not changed his coaching style since his time with Mr. Kawabuchi, as the JFA president reflected, “He taught us that the fundamentals are essential to do anything”.

Many topics were discussed afterwards, including the inauguration of J.League in 1993, the J.League 100 Year Vision, the 2002 FIFA World Cup Korea/Japan™, and the JFA Declaration, 2005. To conclude the session, Mr. Yamamoto asked the panellists, “Please write down what the Japanese football community needs to do after tomorrow”, where President Tashima wrote down “We can get stronger because we have dreams” and stated the followings.

“Power is generated when we strive to achieve our dreams, which motivates us to reach our goals. That is why I believe that the entire Japanese football community must have a dream”.

Mr. Kawabuchi on the other hand wrote down “Building the foundation”, which goes along with Mr. Cramer’s basic principles, as he explained, “Flowers will bloom on top of a solid foundation. Everyone tends to only look up, but I believe that Japanese football can gain more power by building a solid foundation”. 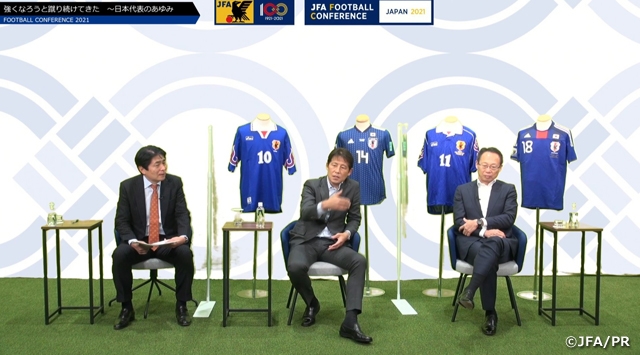 The Japan National Team has become a regular participant at the World Cup after going through a period when it was difficult to win in Asia. Participation in the World Cup became a specific goal during the regime of coach Hans OOFT, who took the helm in 1992.

Mr. Nishino and Mr. Yamamoto, who both worked as assistant coaches under coach Ooft, recalled that the Dutch manager had a “very detail oriented” coaching style. Mr. Okada also mentioned, “We were familiar with the terms ‘triangle’ and ‘support’ at the time, but he was a coach that showed us that those concepts can be integrated into a system”.

A film featuring Mr. Ooft, Mr. Philippe TROUSSIER, Mr. ZICO, Mr. Ivica OSIM, and Mr. Alberto ZACCHERONI was shown, as the successive coaches of the Japan National Team talked about their first impression and the characters of the Japanese players, and how they proceeded to build their teams.

Reflecting on the squad selection for the World Cup in France, Mr. Okada, who became the first Japanese coach to participate in the World Cup, described his selection process, “I simulated every possible situation and selected the players who appeared the most in the simulations, and those who were versatile”. When Mr. Yamamoto asked about his decision to select ONO Shinji, who was 18 years old at the time, Mr. Okada explained the reasoning behind his decision.

“While conducting the simulations, Hide (Mr. NAKATA Hidetoshi) was the centre piece of our offence at the time, and we could not go without him. In case Hide was injured, nobody could have replaced him, so Shinji’s genius talent was our last resort”.

In both 2010 and 2018, we saw a change in the head coach position during the preparation phase of the World Cup, but on both occasions, the team advanced through to the final tournament, despite all the apprehension surrounding the team situation. Reflecting on the situation at the time, Mr. Okada mentioned, “With their backs against the wall, the players took it upon themselves to take the initiative”.

Mr. Nishino also reflected on the World Cup in 2018, where the team entered the competition with limited preparation time, “By changing the team structure just before thecompetition, it shook the football community, upset the players, and made them feel uneasy. However, despite the disruption, the players took action and performed on their own initiative at that competition”. With both coaches mentioning the word, “initiative” could be the keyword for the future of Japanese football.

The final session of day-one featured the theme, “A gift from the mother country: England, a country that never stops moving forward”. JFA Deputy Technical Director ONO Takeshi navigated the session where an interview footage of coach Gareth SOUTHGATE of the England National Team was introduced. 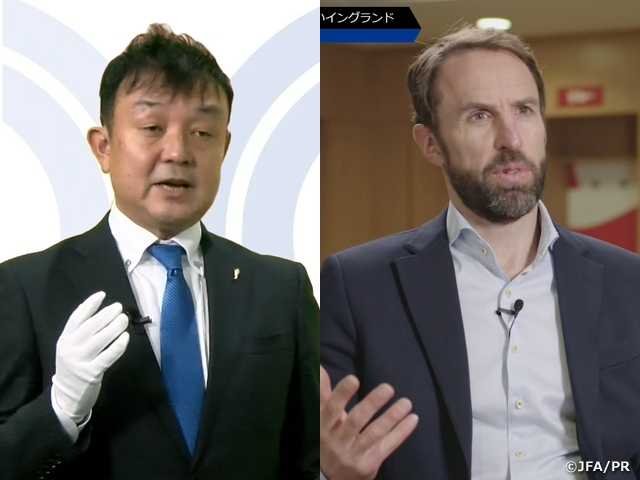 Originally, coach Southgate was scheduled to be invited to the conference, but the plan had to be called off due to the spread of COVID-19. Since it also became difficult for Mr. Ono to travel, an online interview was conducted at the end of last year.

England have reached the semi-finals at the World Cup in 2018. Many young talents thrived at the competition, in which coach Southgate described, “We were able to showcase the best performance in the last 50 years” and mentioned that it was “because of the clubs’ youth systems”. It was introduced that the academy system in England had been renewed over the past eight to nine years, and many young talents have emerged since the renovation.

In addition, the national team training centre “St. George's Park”, which established in 2012, also had a huge impact on the team’s success. Coach Southgate described the new facility as “A hub where all coaches come together, where they can work, share ideas, interact, and invite different parties to share their knowledge”.

When asked about his impression on Japanese football, coach Southgate mentioned, “We are aware that they have been making behind-the-scenes efforts in a consistent manner to improve and evolve the development programmes and play styles of both men and women. They have left a strong impression at every age category. Their performance at the World Cup was especially impressive”.

In response to the interview, coach MORIYASU Hajime of the Japan National Team expressed his gratitude towards the English coach and continued by sharing his aspiration, “Modesty is one of Japan’s many virtues. We still have lots to learn, but we also have plenty of weapons and advantages. Along with all the coaches of this country, we would like to compete against the world with confidence and the belief that we can catch up and surpass our competitions”.

To conclude the interview, coach Southgate delivered his words of encouragement towards JFA, who is celebrating its 100th anniversary, “I am looking forward to sharing our philosophies and coaching ideas, as we continue to make forward progress towards the future together”.

The first day of the conference saw plenty of productive sessions. The second and third day will take place on Sunday 10 and Monday 11 January, respectively, where exciting sessions will be held with topics on women’s football, Japanese football as seen by coaches overseas, and the future of Japanese football.