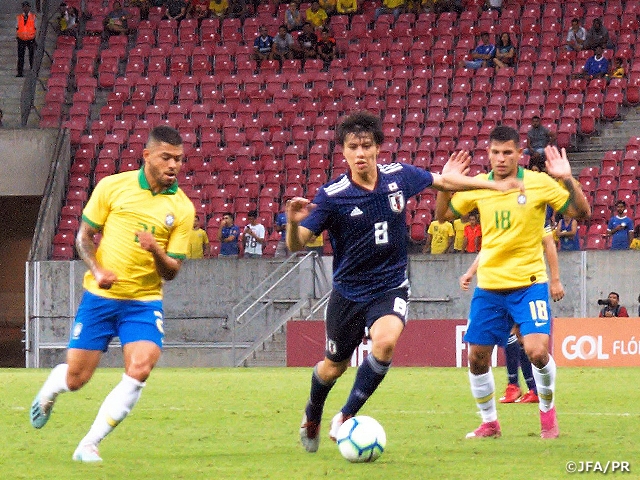 On Monday 14 October, the U-22 Japan National Team faced the U-22 Brazil National Team at Recife, Brazil, where the team came from behind to win the match 3-2.

Facing the Brazilian side who they’ve lost to at the final of the Toulon International Tournament in June, Japan started OSAKO Keisuke at goal with a three-man defence line of WATANABE Tsuyoshi, TATSUTA Yugo, and MACHIDA Koki. TANAKA Ao and NAKAYAMA Yuta were named as the defensive midfielders, while HASHIOKA Daiki and SUGIOKA Daiki were positioned in the flanks. With OGAWA Koki playing as the lone striker, MIYOSHI Koji and MESHINO Ryotaro were placed beneath him. 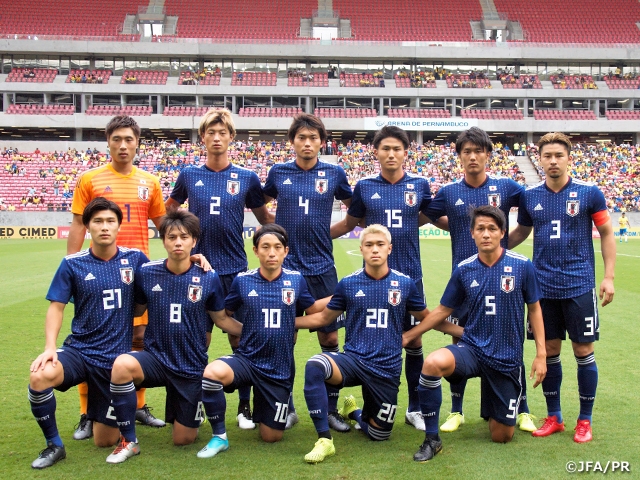 At the beginning of the match, Japan constructed their offence through their build-up plays from the defence line, as acting coach YOKOUCHI Akinobu later reflected, “We wanted to take the initiative of the match.” However, with Brazil applying aggressive pressure from the frontline, Japan struggled to pick up their pace in the early minutes. The opening goal came in the 15th minute, when Watanabe was charged with a foul inside the box, giving Brazil a penalty kick. The home side calmly converted the spot kick to take the lead.

The match progressed with Brazil taking control of the match, but Japan managed to score the equaliser in the 27th minute, when Tanaka received the ball just outside the penalty area and struck a shot that pierced the Brazilian goal. The shot taken by Tanaka knuckled away from the Brazilian goalkeeper, as the Japanese midfielder reflected on the shot, “I wanted to throw off the goalkeeper’s timing.”

Following the 30th minute mark, Brazil’s intensity started to simmer down, while Japan started to find their rhythm. Japan created multiple opportunities towards the end of the first half, but fell short from taking the lead, as the match entered halftime tied at 1-1.

Japan carried their momentum into the second half and scored the go-ahead goal in the 52nd minute. The goal was once again scored by Tanaka, who capitalised on a loose ball just outside the penalty area, as his shot deflected off a Brazilian defender to shake the net. Team captain, Nakayama followed in the 68th minute, when he received the ball from the right flank before striking a powerful shot that captured the right hand corner of the goal. The shot he later mentioned, “I had my mind made up to take that shot,” gave Japan a two goal lead. 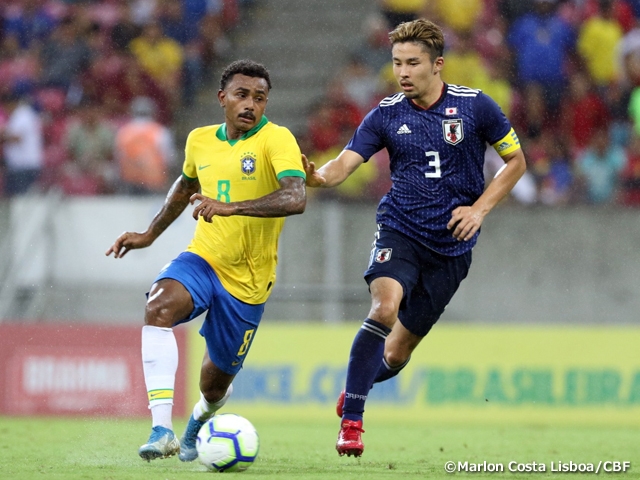 With less than 10 minutes remaining on the clock, Brazil started to rally back. In the 83rd minute, the home side earned a penalty kick from a hand ball committed by Tatsuta and converted the spot kick to close down the gap to just one goal. Two minutes later, Machida was shown a red card for showing his studs, leaving Japan with just 10 players for the remainder of the match.

In the closing minutes of the match, Brazil made their final efforts to level the match, but Japan showcased a persistent effort to keep the home side from scoring a goal, as the final whistle blew with a score of 3-2. After the match, coach Yokouchi praised his players, “The players did a great job to execute our game plan and their efforts have led us to this victory.”

YOKOUCHI Akinobu, Acting Coach
With many new players joining our team for this tour, we wanted to see how compatible these players can be with our team tactics. After seeing how we struggled to score goals in our tour to Mexico and USA last month, we focused on our offence for this tour. Although we had very limited time to train, it was great to see our team score multiple goals in this match. However, we wanted to play more intelligently in defence, especially against a team like Brazil. That is definitely something we must improve on.

GK #1 OSAKO Keisuke (Sanfrecce Hiroshima)
I was able to showcase my strong points by taking care of the high balls and stopping shots. However, I still feel like I have plenty of room for improvements in our build-up plays.

DF #15 WATANABE Tsuyoshi (FC Tokyo)
Although we looked a bit shaky in the early minutes of the match, we gradually got used to the three-back system and managed to showcase a solid performance. I felt the need to improve on my build-up plays and my ability to cope with players with speed, so I will work on those aspects once I return to my club.

MF #3 NAKAYAMA Yuta (PEC Zwolle)
I was able to force many turnovers at the midfield, and it gave me great confidence. However, we have not achieved anything yet, so we must continue to improve on our strong points, while improving on the aspects we struggled today.

MF #8 TANAKA Ao (Kawasaki Frontale)
I haven’t been taking much shots and I was left unmarked in that situation, so I took a shot with the hopes that I can throw off the goalkeeper’s timing. I am glad it went in. We were totally dominated by them at the Toulon International Tournament, and I have worked tirelessly to close down that gap, so I am really happy with this result. However, we made many mistakes, so we still have plenty to work on.

MF #10 MIYOSHI Koji (Royal Antwerp FC)
It means a lot for us to win matches in an away situation like this. Although we managed to enter the match with great intensity, we still allowed our opponent to move the ball around with ease. Even when our opponent has control of the ball, we must find ways to create chances by making quicker transition from defence to offence. We need to create more attacking threats and heighten the quality of our plays upfront.

FW #9 OGAWA Koki (Mito HollyHock)
I focused on making plays that would push back the opposing defence line, which allowed us to score three goals from mid-range shots. However, I wasn’t able to score any goals myself, so I need to be more critical at the final third. This was a great result for the team, but it was an unsatisfying result for me personally.