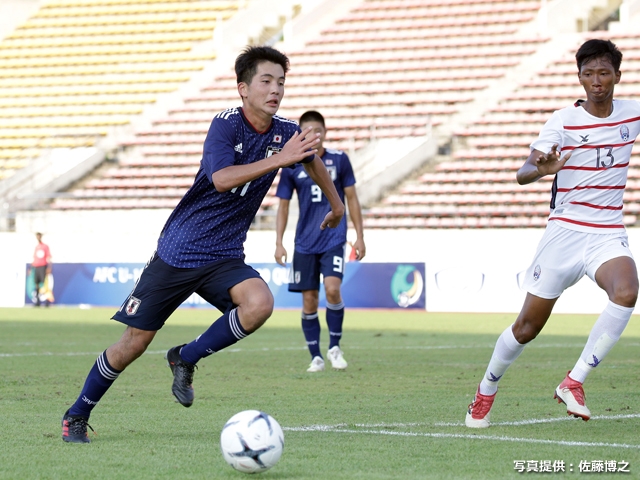 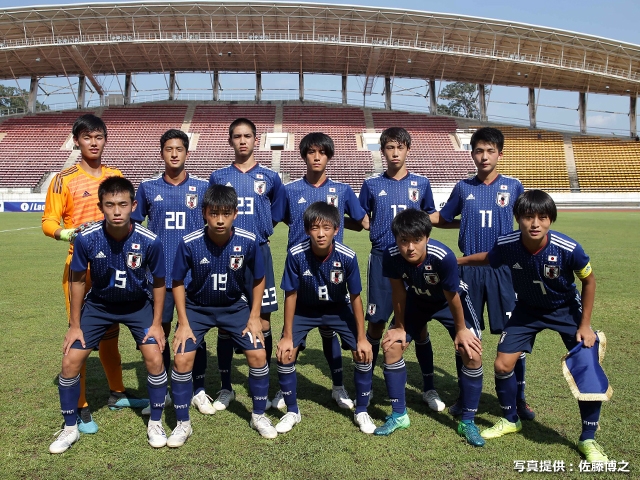 On Friday 20 September, the U-15 Japan National Team faced the U-15 Cambodia National Team in their second match of the AFC U-16 Championship 2020 qualification.

Following their first match against Laos, Japan rotated nine players from their starting line-up. With Malaysia winning over Cambodia 7-0 in their first match, coach MORIYAMA Yoshiro demanded his players to win with more than eight goals for this match, and the players responded to the coach’s words by showing great aggression to start the match.

The opening goal came in the third minute, when MORIMOTO Sorato captured the first goal for Japan. Morimoto went onto score another goal in the 11th minute with a powerful strike with his left foot. OSAKA Sina followed in the 15th minute to extend their lead to three goals, but Japan started to show signs of struggles after this goal, as they lacked quality in the final third. With Japan failing to convert more goals, the match entered halftime with a score of 3-0.

Despite their late struggles in the first half, Japan regained their momentum in the second half. KITANO Sota started off in the 49th minute, followed by the 57th minute goal scored by NAITO Yamato. Osaka and Kitano each scored their second goal of the match in the 59th and 62nd minute respectively to make it 7-0, and Morimoto completed the action by scoring his third goal of the match in the 87th minute to make it 8-0 at the final whistle.

With their ticket to the AFC U-16 Championship 2020 at stake, the U-15 Japan National Team will now face the U-15 Malaysia National Team on Sunday 22 September as their third match of the qualification round. 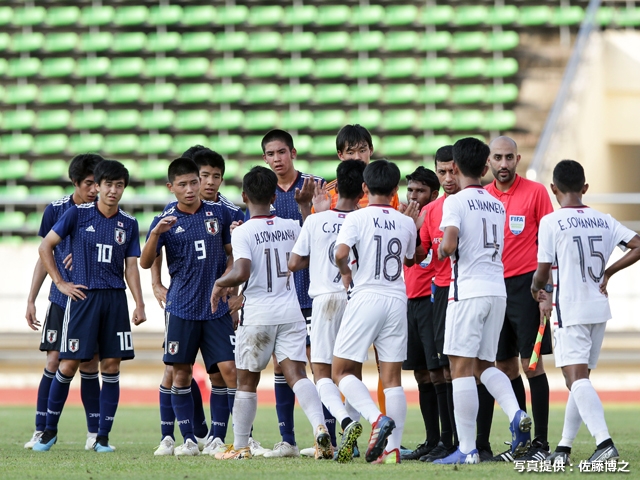 GK #12 SAGA Tessho (JFA Academy Fukushima U15)
Today I feel like we were able to fix the issues we saw in our match against Laos, as we were able to score two goals in the first 10 minutes of the match. However, we lacked quality in our plays despite facing a light pressure from our opponents. Although our performance was poor in the first half, we were able to improve our performance and score five goals in the second half. I personally feel good about keeping a clean sheet as a goalkeeper. We hope to implement everything we’ve learned from these two matches to showcase a better performance in our match against Malaysia.

DF #23 HIGASHI Renta (Takagawa Gakuen Junior High School)
We seemed to rush our plays in the first half and made many mistakes in our build-up plays. However, I was able to showcase my strengths by winning all the one-on-one situations, and the team managed to win with a score of 8-0. The players on the bench did a great job to stay vocal and give advice to the players on the pitch, and it really helped us regain our composure in the second half. The quality of our passes is still not at the level we’d like it to be, so we must improve ourselves in that matter.

MF #8 KITANO Sota (Cerezo Osaka U-15)
We couldn’t find our rhythm and struggled to finish our chances during the first half, but we managed to make the adjustments in the second half to score a total of eight goals in this match. However, we saw plenty of room for improvements through this match. Our next match against Malaysia will certainly be a tougher match, but we will fight through as a team and earn our spot into the main tournament.

FW #11 MORIMOTO Sorato (Sanfrecce Hiroshima Youth)
It was great to see us move the ball and control the match in the early minutes of the match, but we saw our attackers getting stranded at top in many occasions during the first half, which is something we must address ahead of our next match. I personally was able to showcase my ability to score goals by scoring a hat-trick. However, I still need to improve my off the ball movements, so I hope to showcase a better performance in our next match against Malaysia.