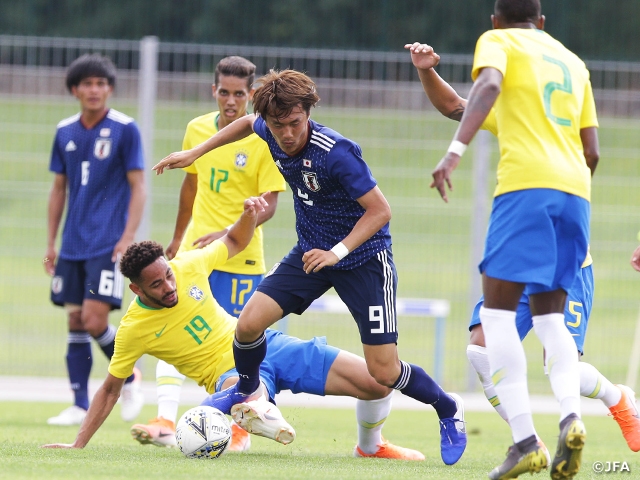 On Saturday 15 June, the U-22 Japan National Team faced the U-22 Brazil National Team in the final of the 47th Toulon International Tournament 2019. The two teams drew 1-1 in regulation time, but it was Brazil who took the title after winning the penalty shootouts.

With their first ever title at the Toulon International at stake, Japan rotated four players from the starting line-up that featured their semi-final match. OBI Powell Obinna started in goal with the three-back defence line of OMINAMI Takuma, OKAZAKI Makoto, and TANAKA Shunta. It was KO Takahiro and TANAKA Ao who were positioned as the defensive midfielders while NAGANUMA Yoichi and FUNAKI Kakeru were placed in the flanks. IWASAKI Yuto and HATATE Reo took on the attacking midfielder role with OGAWA Koki as the lone striker.

The match started with Japan applying aggressive pressure from the frontline. An early opportunity was created in the fifth minute when they forced a turnover deep in the opposing end, allowing Hatate to strike a shot from mid-range, but his attempt went wide of the goal.

However, as time progressed, it was Brazil who started to take control of the match. In the 19th minute, Brazil showcased a quick sequence of ball exchange that led to a pass that penetrated the space behind the Japanese defence line, allowing the Brazilian striker to capture the opener. With Japan conceding the goal while their defence were making great efforts to contain the opponents, Tanaka Shunta later reflected on the scene as, “a very regretful goal.”

Despite conceding the opening goal, Japan kept making persistent efforts to keep the match within their reach. Their patience was paid off in the 39th minute, when Ogawa ran up the field to apply pressure to the opposing defender trying to make a clearance. With the pressure approaching his side, the Brazilian defender misread his timing to head the ball, allowing Ogawa to strike the loose ball with a direct volley that pierced the right-hand corner of the goal.

The second half saw Brazil take the initiative, but Japan remained composed to keep the score line intact. While Brazil anticipated for their opportunities from their counter attacks and individual efforts made by their attackers, led by Okazaki, the Japanese defence fought well to deny their chances With both sides failing to score the go-ahead goal, the regulation time of the match ended with a score of 1-1, sending Japan to their second consecutive penalty shootouts in this knockout stage.

The winner of the tournament was decided after all five attempts were successfully converted by Brazil, while Japan’s fifth spot taker, Hatate missed his attempt. As a result, Japan finished as the runners-up of the tournament. Japan’s Tanaka Ao was named as the third-place nominee of the tournament MVP, while the team was awarded with the Fair-Play Award and the Sustainable Development Award. 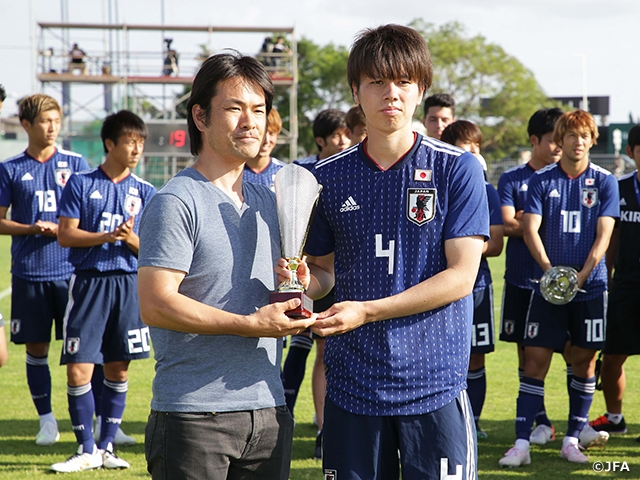 After the match, acting coach YOKOUCHI Akinobu mentioned, “We must learn from this match and never forget this bitter feeling.” The current activities for the U-22 Japan National Team has now came to an end, and the team will aim to restart its activities in September, when they go onto a tour abroad to prepare ahead of the Tokyo Olympics.

YOKOUCHI Akinobu, Acting Coach
We had more things we wanted to showcase in the match, but it didn’t go so easily for us today. But even when facing adversity, our players showed great patience and made resilient efforts to fight for the ball. I am very thankful for our players for keeping their chins up even after conceding the opening goal. At this tournament, we were given the opportunity to face five of the to top teams of the world and each match has given us a wonderful learning experience that will help us grow as a team in the future.

GK #1 OBI Powell Obinna (Ryutsu Keizai University)
Although it would’ve been better if we won the title, but the fact that we made it this far gives us more reasons to believed that we were heading towards the right direction and that we managed to showcase our spirit at this tournament. Despite the disappointing result, I feel like there are many positive aspects we can take back from this tournament.

DF #22 TANAKA Shunta (Osaka University of Health and Sport Sciences)
Although we allowed our opponents to take control of the ball for a long stretch in the first half, we still managed to keep our composure in defence. With the team entering the match with a three-back formation, we kept on communicating with each other within the defence line to stay focused, but we were still caught off guards when we conceded that opening goal, so that was a really regretful goal. Once I return to my team in Japan, I will work hard so that I can get called to this team again in the future events.

MF #17 KO Takahiro (Gamba Osaka)
I personally felt that our opponent’s number 5, 18, and 3 were at a totally different level. Those were players we can’t play against at the J. League, and I had a lot of fun facing players who are way beyond our level. It also made me realise that I need to work much harder in order to reach their level.

FW #11 HATATE Reo (Juntendo University)
If I was able to convert my opportunity, this would’ve been a totally different outcome, so I am very disappointed. It really makes this result hard to swallow because we came here to win the title, and with the core players of the team traveling to attend the Copa America, the remaining players kept encouraging each other to motivate ourselves. However, despite the loss, the fact that we were able to face Brazil at the end gives me a great experience for my football career.

FW #9 OGAWA Koki (Jubilo Iwata)
I am very thankful for our defence for keeping us in the game and I think we fought very hard until the end. Despite seeing very few opportunities created, I told my teammates to hang in there, because I will capitalise on the opportunities to win us the match. Our team played with great intensity and we were able to showcase a great match. However, Brazil created many opportunities that could have gone in, so in order to win against an opponent like Brazil, we need to be able to showcase a much better performance as a team. 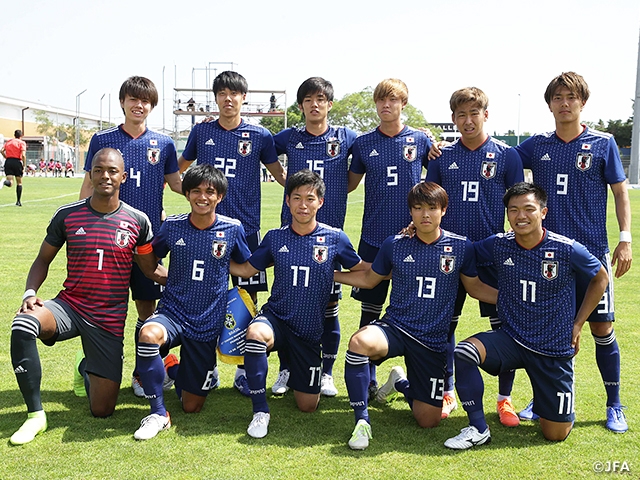