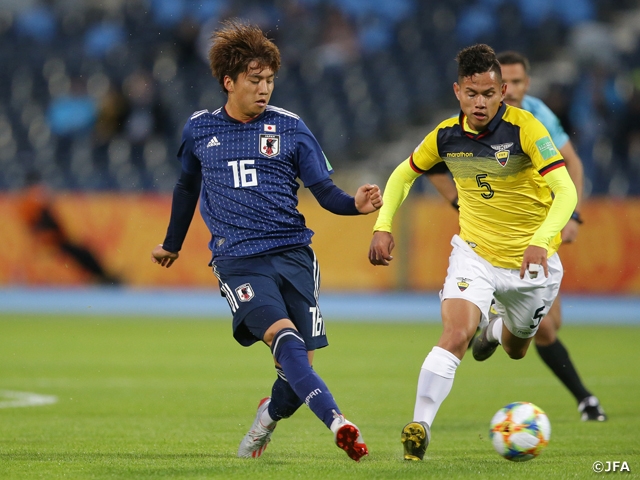 On Thursday 23 May, the U-20 Japan National Team faced the U-20 Ecuador National Team in their first group stage match of the FIFA U-20 World Cup Poland 2019. Despite conceding a goal in the first half, the team came back with a goal scored by YAMADA Kota in the 68th minute to start off the tournament with a 1-1 draw.

In their tournament opener, Japan started a line-up featuring WAKAHARA Tomoya in goal with the defence line formed by SUGAWARA Yukinari, SEKO Ayumu, KOBAYASHI Yuki, and HIGASHI Shunki. SAITO Mitsuki and ITO Hiroki played as the defensive midfielders while GOKE Yuta and Yamada Kota were positioned in the flanks. SAITO Koki and TAGAWA Kyosuke were the strikers named to play upfront. 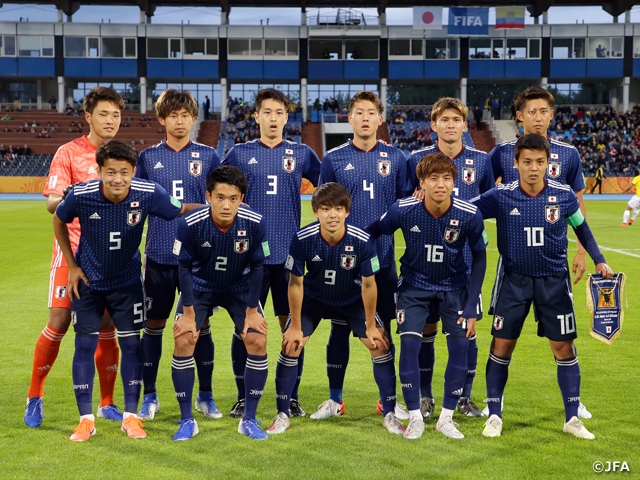 The two sides showcased an equally matched bout in the early minutes of the first half, as both sides created close opportunities, but it was Ecuador who gradually took control of the match. With Ecuador applying more pressure upfront, Japan defended patiently to keep the clean sheet, but the deadlock was broken just before the end of the first half. The goal came in the 45th minute, when Ecuador earned a freekick in the right side. Japanese goalkeeper Wakahara responded to the delivery and made the effort to parry the ball out of the goal area, but the ball deflected off his teammate Tagawa and bounced into the goal.

Trailing by a goal, Japan came out with a more offensive approach in the second half. A turning point came in the 51st minute, when Japan conceded a penalty kick to Ecuador, but Wakahara made an excellent save to keep the score intact. The superb effort made by their goalkeeper brought momentum to the team, which led to the equaliser scored by Yamada in the 68th minute, when he converted a loose ball in front of the goal to level the match. 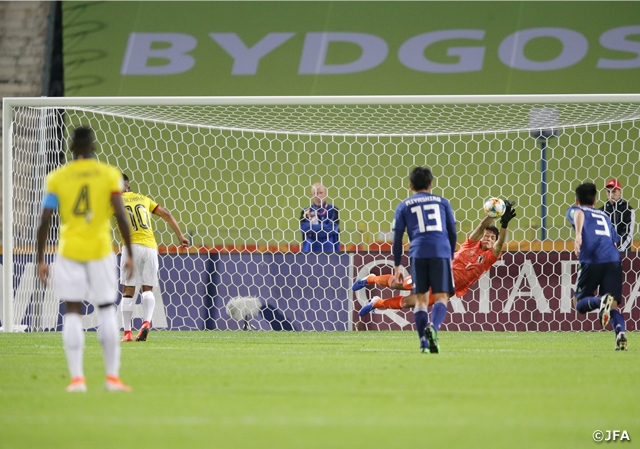 With both sides showing great intensity for the remaining minutes, the match ended with a 1-1 draw. Japan will now face Mexico in their second group stage match on Sunday 26.

KAGEYAMA Masanaga, Coach
We really wanted to avoid a scenario where we give three points to our opponents while earning ourselves zero points. I am regretting the fact that I have excessively emphasised the strengths of Ecuador prior to the match, which led our players to perform the way they did in the first half. The players did well in the second half, so we must build on the performance we showed in the second half and heighten the quality of our plays in the upcoming matches.

GK #1 WAKAHARA Tomoya (Kyoto Sanga F.C.)
I had plenty of time in the scene where we conceded the penalty kick, so I was able to keep my cool in that situation. When the kicker stepped up to the spot, I instinctively knew which way he was going for, so I made my move with confidence. It’s great that we managed to earn a point today, but if we could have played the way we did in the second half from the beginning, the result might’ve been different. Ahead of our next match, we will talk to each other and find ways to showcase a better performance to start the match.

MF #10 SAITO Mitsuki (Shonan Bellmare)
We didn’t necessarily enter the match poorly, but our plays were too passive when receiving the ball. It made us realise that we must take a more aggressive approach when receiving the ball or else we could concede a goal the way we did in our match today. However, the fact that we managed to come from behind and tie the match gave us something we can be proud of.

MF #16 YAMADA Kota (Yokohama F・Marinos)
When I found out I was starting the match, I was overwhelmed, and I couldn’t hold down my excitement. However, we looked stiff in the first half and couldn’t showcase our usual performance. By conceding the opening goal, it made the match even tougher on ourselves. I am relieved that I was able to showcase my strong points and that our team managed to display a good performance in the second half.