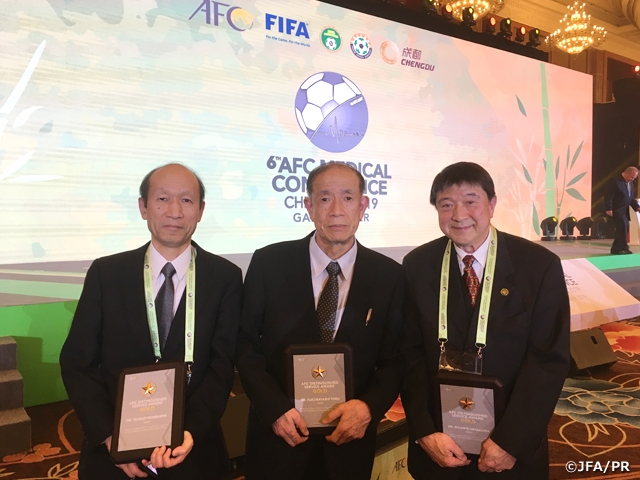 On Wednesday 6 March, the 2nd AFC Medical Awards took place in the Chinese city of Chengdu during the 6th AFC Medical Conference 2019. During the Award, four doctors from Japan were awarded with the following awards: 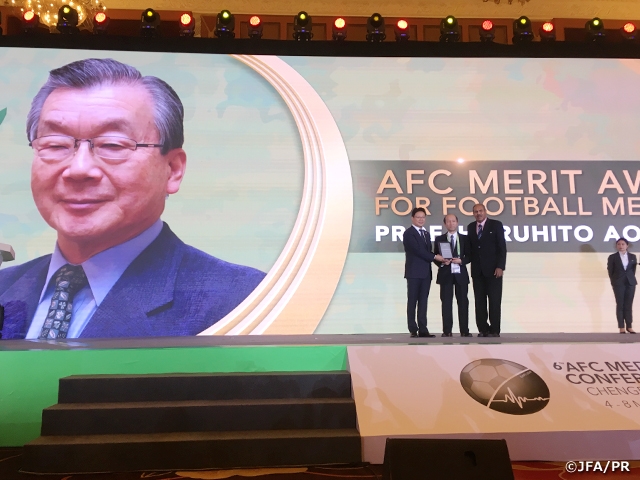 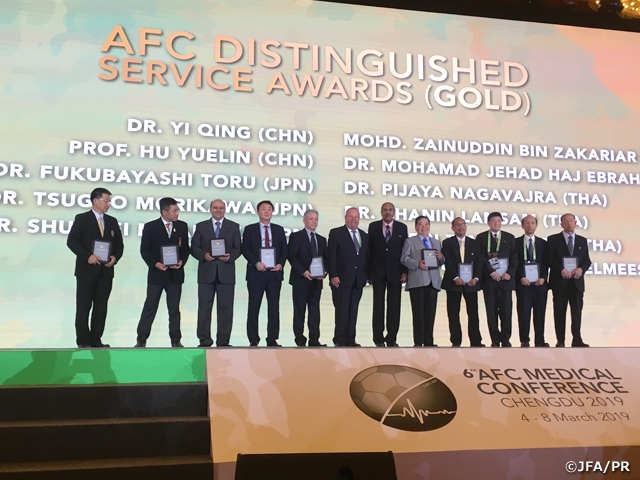 Dr. FUKUBAYASHI Toru
I am honoured to be receiving the AFC Distinguished Service Award (Gold). Back in my college days, I was a tennis player and had nothing to do with football. It was only after I started working as an orthopaedic surgeon at the Kanto Rosai Hospital, I started to work with football players like RAMOS (Ruy), KAZU (MIURA Kazuyoshi), and KITAZAWA (Tsuyoshi), because the training ground of Yomiuri FC (Tokyo Verdy) was nearby the hospital. It also helped that my school mate from high school was their coach (Mr. AIKAWA Ryoichi). Yomiuri FC employed a South American style football to win over powerhouses and won the national title. With their core players like Kazu, KATO (Hisashi), Kitazawa, and MATSUKI (Yasutaro) getting called up to the Japan National Team, I received a request to attend the team as the team doctor of the Japan National Team. That was how I got started prior to the FIFA World Cup France 1998. The Japan National Team went onto earn their first ever spot into the World Cup at Johor Bahru. From those experiences, I was named as the Director of JFA Medical Committee, and with the support of the board of directors, I developed the idea to install a more scientific medical support and implemented the concept. Having a registered dietitian accompany the team and employing conditioning coaches from the Japan Association of Athletics Federations are some of the examples of the new ideas we adopted. These were key aspects for the success at the FIFA World Cup South Africa 2010, where the players were able to condition themselves ahead of the matches played at high altitude. The future of sports medicine will transform from care to prevention. I will continue to work hard in the sports medicine field.

Dr. MIYAKAWA Shumpei
As a member of the JFA Medical Committee, I was involved in providing medical support to football players since 1987. I have not accomplished anything big, it’s just my perseverance paying out the dividends and I am accepting this as a “Thank you for your dedicated service” award. I wouldn’t be receiving this award without the support of the football doctors and the JFA, so I am very grateful for all their support. The AFC Medical Conference started under the supervision of Medical Committee Director OHATA Noboru in 1995. Despite the limited budget and difficulties of inviting people from abroad, I remember it being a very successful event. Back then, I was a team doctor for the Japan National Team along with Dr. Fukubayashi Toru and we were supporting the team that was striving to earn their spot into the World Cup in France. Looking back at the event, the conference must have been established with the hopes to succeed in the bidding process of the FIFA World Cup 2002, and the hopes to make the first ever World Cup appearance in 1998. I am hearing that the bidding war to host this conference is pretty intense. I believe that the future success of the AFC is depending on the doctors of Japan, so I hope to pass on my spirit to the younger generations.

Dr. MORIKAWA Tsuguo
I was awarded with the AFC Distinguished Service Award (Gold). This was only made possible with the support given by my predecessors and everyone involved, so I would like to share my sincere gratitude to everyone. After graduating from medical school at Chiba University in 1981, I entered the Department of Orthopaedic Surgery. My first job with the JFA was to attend the U-16 Japan National Team as a team doctor in that year’s Lion City Cup held in Singapore. I then attended the World Youth Championship (U-20 FIFA World Cup) in 1995 and 1997 as a doctor. In 2002 and 2006, I was the team doctor of the Japan National Team for the FIFA World Cup. During those years, I must have inconvenienced many people, but with the support of many other doctors, the staffs of JFA, and everyone involved, I was able to fulfill my duties. I was also given the opportunity to work as a member of the JFA Medical Committee, working under directors like Dr. Ohata Noboru, Dr. WAKAYAMA Machihisa, Dr. Aoki Haruhito, Dr. Fukubayashi Toru, and Dr. IKEDA Hiroshi. The environment surrounding the Japanese football community has changed drastically over the past 30 years and the medical support system has also seen a great advancement over the same time frame. However, there are still many issues that needs to be addressed. I hope I can continue to earn the support from everyone and contribute to the development of football.