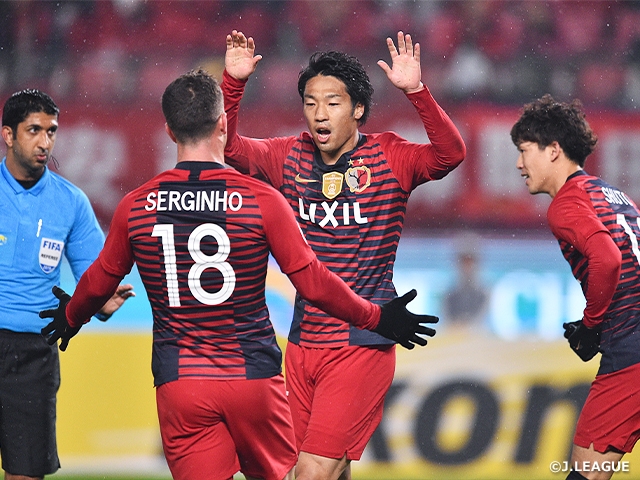 On Tuesday 19 February, the AFC Champions League (ACL) 2019 play-offs took place where Kashima Antlers defeated Newcastle Jets (Australia) 4-1, while Sanfrecce Hiroshima earned their win in penalty shootouts after drawing 0-0 to Chiangrai United (Thailand). As a result, both teams earned their spot into the main tournament of the ACL.

With the J. League Champions Kawasaki Frontale and Urawa Red Diamonds, who won the Emperor's Cup also making their ways into the tournament, total of four teams from Japan will compete in the East district group stage, which will kick off on Tuesday 5 March.

Despite winning the ACL title last year, Kashima had to fight their way into this year’s tournament after finishing third at the J. League. Eager to repeat their success from last year, the defending champions showcased great aggression to start off the play-off match.

In the 18th minute, Kashima created an opportunity following a corner kick, allowing Leo SILVA to take a shot from distance. The shot was redirected by SERGINHO, forcing the opposing goalkeeper to parry the ball, but Kashima’s newly acquired forward ITO Sho was there to convert the deflection to score the opening goal.

Following their runners-up finish at the A-League, Newcastle was in search for their first ACL appearance since 2009. In efforts to win through the play-offs, compared to their usual four-back system, the Australian side employed a five-back system where their wing-backs anticipated for opportunities to attack the flanks.

Just six minutes after Kashima’s opener, Newcastle penetrated the penalty area with their quick passes. An attempt made by the Kashima defence took an unfortunate bounce, allowing Newcastle’s Ronald VARGAS to convert the loose ball to equalise the match.

Soon after the match was levelled, Kashima started to rally to retake the lead. In the 32nd minute, ANZAI Koki broke through the right flank before sending a cross into the middle to connect with YAMAMOTO Shuto, who was making a run at the far post to head-in the go-ahead goal.

The Australian side came close to levelling the match again from a long feed delivered to Daniel GEORGIEVSKI, who sent in a cross towards the box. John KOUTROUMBIS was at the far side anticipating to take a shot, but the Kashima defenders did well to deny the opportunity.

After ending the first half with a 2-1 lead, Kashima continued to take control of the match in the second half. In the 66th minute, Leo Silva induced a foul in the opposing penalty area, allowing Serginho to convert the spot kick to extend the team’s lead to 3-1. 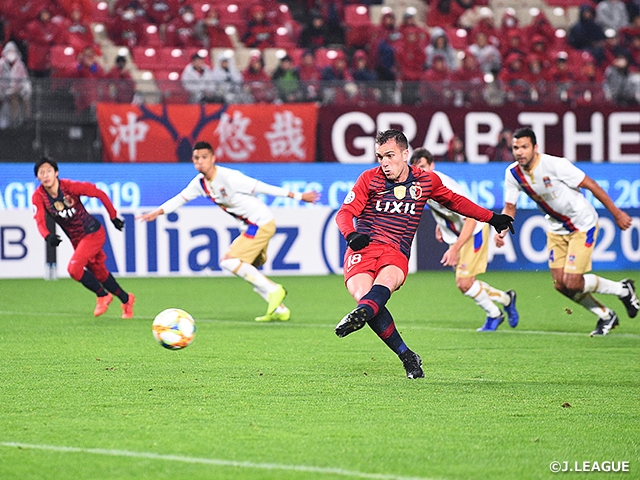 While Newcastle sought for opportunities by utilising their substitutes, Kashima made the adjustment by bringing in INUKAI Tomoya to switch to a three-back formation. The defending champions capped off the match by scoring one last goal in additional time of the second half as Serginho capitalised on the delivery sent by YAMAGUCHI Kazuma, to win the match with a final score of 4-1.

As a result, Kashima will join the main tournament of the ACL in Group E, along with Gyeongnam FC (Korea Republic), Johor Darul Ta'zim (Malaysia), and Shandong Luneng Taishan (China PR).

In the other play-off match involving a Japanese club, Hiroshima struggled to find ways to score against the Thai FA Cup champions Chiangrai United but prevailed in penalty shootouts to return to the ACL after missing their opportunity to appear in last year’s tournament.

A golden opportunity came for Hiroshima in the 10th minute, when they earned a penalty kick from a hand ball committed by a Chiangrai player. However, the spot kick delivered by MINAGAWA Yusuke was denied by the opposing goalkeeper.

Despite missing out on their chance to take the lead, it was the Hiroshima side who were actively engaging in offence as NOTSUDA Gakuto and KASHIWA Yoshifumi created opportunities from their crosses and dribbles but came short from capturing the net. 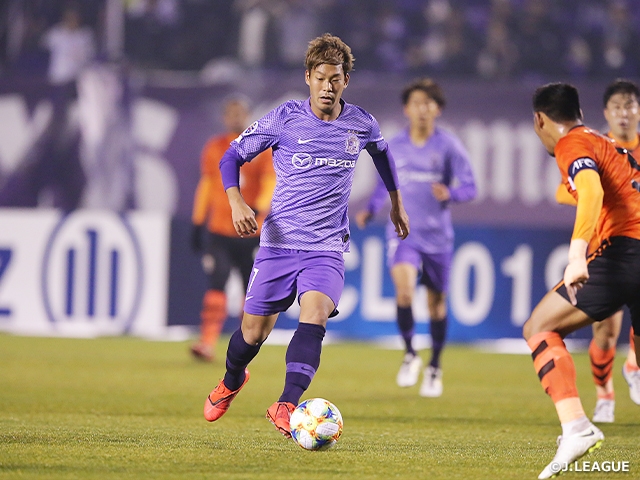 In the 70th minute, HIGASHI Shunki delivered a corner kick that picked out ARAKI Hayato, who struck a right-footed shot, but his attempt was denied by the woodworks. In efforts to take the lead, Hiroshima brought in PATRIC in for Minagawa in the 82nd minute, but they would come out empty handed, as the match entered extra time.

Towards the final seconds of extra time, Patric converted a loose ball created by a shot taken by SHIBASAKI Kosei, but the play was called offsides.

While Chiangrai registered three shots, Hiroshima marked 19 shots, but the fate of the match was to be determined by penalty kicks. After the second and third spot takers for the Thailand side missed their kicks, Hiroshima converted four out of their five attempts to come out victorious with a score of 4-3.

The teams playing in Group G were already determined prior to the play-offs, as Urawa will be joined by Beijing Sinobo Guoan (China PR), Jeonbuk Hyundai Motors (Korea Republic), and Buriram United (Thailand).

OIWA Go, Coach (Kashima Antlers)
With this being our first match of the season, and with the nature of the play-offs, it was a very difficult match, but our players did very well. They managed to make the adjustments on the field while staying aggressive throughout the match. However, this match has only given us a spot into the ACL. We conceded a goal from our own mistake and showed are inability to anticipate for the second ball. We were clearly being affected by the game flow and the opponents’ momentum. That was some aspects we talked during halftime and the players did well to make the adjustments in the second half. We looked stiff today, and we could have done a better job overall, but we will pick up our pace towards the opening of the new season at the J. League.

FW SERGINHO (Kashima Antlers)
Our goal was to earn our spot into the ACL, and that was exactly what we did today, so I am very glad about this result and I feel like we were able to show our intention on our home court. I have managed to score in most matches played at the ACL, so I hope to continue this trend at the league matches as well. I have been communicating a lot with Ito in the past month at our training sessions, so I am glad we both managed to perform well in this match today.

FW ITO Sho (Kashima Antlers)
It was a match we couldn’t afford to lose, and I knew that it was going to be important to score the first goal, so I am glad I was able to convert the opportunity and win the match. Kashima has always been a strong team, so it’s essential for me to find out how I can contribute for this team. As the defending champions, we will be targeted by all the teams, but we will give our best to repeat as champions.

Ernest MERRICK, Coach (Newcastle Jets)
Kashima was the better team. They are quick, technically sound, and their plays were directly aimed to score goals. We did manage to put up an equal bout until we gave up the penalty kick. We were in position to level the match with just one goal, so that penalty kick turned out to be a costly play.