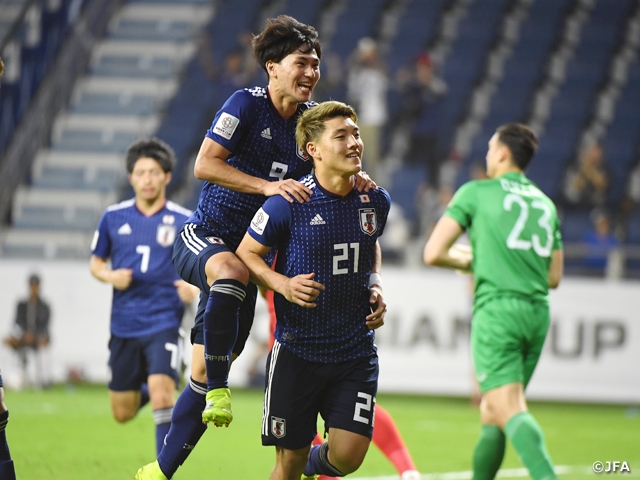 On Thursday 24 January, the SAMURAI BLUE (Japan National Team) played against the Vietnam National Team at the quarterfinals of the AFC Asian Cup UAE 2019. In their pursuit to win their fifth overall Asian Cup title, Japan won the match held at Al Maktoum Stadium in Dubai with the help of midfielder DOAN Ritsu’s (FC Groningen) PK scored in the second half.

Japan will now face the Iran National Team at the semi-final, scheduled on Monday 28 at Al Ain.

Despite winning through the tournament with their great persistency, Japan struggled in the quarterfinals where they faced a Vietnam side who showcased a solid performance in defence.

Following their round of 16 match against Saudi Arabia, which took place three days ago, Japan started an identical line-up, except for their lone striker position. With forward MUTO Yoshinori (Newcastle United) being suspended with accumulative yellow cards, Japan started KITAGAWA Koya (Shimizu S-Pulse) upfront against Vietnam. 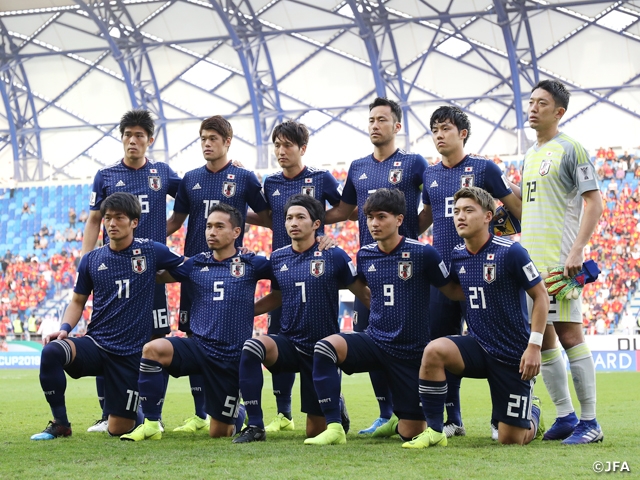 On the other hand, Vietnam started the same line-up from their round of 16 match against Jordan, where they won in penalty shootouts. Due to the match schedule, Vietnam entered the quarterfinals with an extra day rest compared to Japan.

The match started with Japan possessing the ball, but with Vietnam parking a bus in front of the goal with nine players dropping deep, the Japanese side struggled to get their passes through to the goal area.

An opportunity was created in the 23rd minute, when Kitagawa and HARAGUCHI Genki (Hannover 96) combined upfront to earn a corner kick. From this corner kick, defender YOSHIDA Maya (Southampton FC) struck a header to shake the net, but the goal was called back with a hand ball after the play was under review by the VAR (Video Assistant Referee), which was employed from the quarterfinals.

Japan gained another opportunity from a corner kick in the 29th minute, when TOMIYASU Takehiro (Sint-Truidense V.V.) connected with the ball delivered by SHIBASAKI Gaku (Getafe C.F.), but his effort was saved by the opposing goalkeeper.

The Vietnam side, who made their first quarterfinals appearance since 2007, initiated counter attacks by collecting the ball to their forward NGUYEN Cong Phuong. The former Mito striker carried the ball up and made efforts to threaten the Japanese goal.

In the 37th minute, Vietnam forced a turnover in the Japanese territory to allow PHAN Van Duc to take a shot at goal. Soon after that opportunity, another mistake made by the Japanese defence line led to a shot taken by DO Hung Dung. Although goalkeeper GONDA Shuichi (Sagan Tosu) was there to make the save in both occasions, Japan displayed defensive flaws in back-to-back plays.

The best opportunity for Japan came towards the end of the first half, where Shibasaki, Doan, and MINAMINO Takumi (FC Red Bull Salzburg) combined superbly in the box, but the final shot was saved by the opposing goalkeeper.

After the match entered halftime scoreless, Vietnam continued to drop deep in the second half. Against the solid defence showcased by their opponents, Japan kept moving the ball in midfield while anticipating for their opportunity. In the 52nd minute, midfielder ENDO Wataru (Sint-Truidense V.V.) struck a mid-range shot at goal, but the opposing goalkeeper was there to make the save.

In the 57th minute, Doan was brought down in the box after he responded to a through ball delivered by Haraguchi. The play was initially ruled as no foul, but after being reviewed by the VAR, Japan was awarded with a penalty kick. Doan successfully converted the spot kick, where he later claimed, “I knew I was going to score,” giving Japan the desperately needed goal. 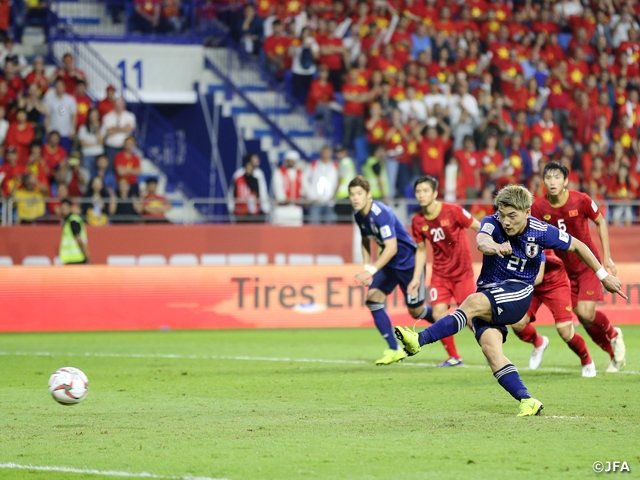 Following the opening goal, Japan revitalised their offence. In the 68th minute, Haraguchi struck a shot after receiving a long ball delivered by Doan. Four minutes later, OSAKO Yuya (Werder Bremen) was brought onto the pitch to give Japan more movements upfront as Doan created another opportunity to allow Minamino to take a shot in the 77th minute.

The Vietnam side, who entered the quarterfinals with great momentum, brought in their attacking players in efforts to level the match. With the team shifting towards a more attack minded formation, Vietnam threatened the Japanese goal towards the end, as long balls were delivered to NGUYEN Van Toan upfront.

However, Japan was able to defend through the closing minutes of the match and kept their 1-0 lead until the end, making their ways into their first semi-finals since the 2011 tournament.

MORIYASU Hajime, Coach of SAMURAI BLUE (Japan National Team)
At the knockout stage, what’s important is that we advance through whatever it takes. It was great to see our players maintain a clean sheet and win against Vietnam. The match has given us another great experience that will certainly make us stronger. We will continue to challenge ourselves. We created many opportunities, so it would have been ideal if we converted more of those chances and won with a bigger margin. However, despite the struggle, the players did a great job to maintain their focus and play with composure to earn the victory. I feel like we have gained another step forward as a team. Vietnam showcased a very solid performance in defence, and it was hard to break them down. Ahead of the next match, we must work to heighten the quality of our plays in the final third. With the short interval from our previous match, we didn’t have enough time to practice, so planned to build on the combinations we showed in our match against Saudi Arabia. We will now have three days to prepare for the semi-finals, so we will do our best to get ourselves ready. Throughout this tournament, we have gained many match-experiences. My job is to allow my players to utilise their adaptability and give them the chance to play to their full potential.

DF #22 YOSHIDA Maya (Southampton FC)
We allowed our opponents to initiate counter attacks from our own mistakes. Our approach allowed the opponent’s #10 to face the goal, and our team was forced to drop back in our own territory, making it that much tougher for our offence to pick up their pace. We struggled to create spaces to play the ball in the first half but managed to pick up our tempo in the second half, despite being tired, so that was great.

MF #7 SHIBASAKI Gaku (Getafe C.F.)
It was a very difficult match, but I am glad that we were able to prevail at the end. If we could have scored the second and third goal, it would have been so much easier, but we still managed to keep a clean sheet and we were able to showcase some good combinations, so we should be happy with this result.

MF #21 DOAN Ritsu (FC Groningen)
We knew we were going to face a tough match. We managed to add layers to our attacks in the second half. The scene where we earned the penalty kick, that play was exactly what Coach Moriyasu has been striving for. For the first time in this tournament, I feel like I was able to take a good start at the ball and Haraguchi delivered a great ball. I wanted to score that play to give him the assist, but nonetheless it was a good attack. I am always eager to score a goal and that penalty has given us momentum in the match today.

PARK Hang-Seo, Coach of Vietnam National Team
Advancing to the quarterfinals was a dramatic event for us. Following the Suzuki Cup, we didn’t have sufficient time to rest and prepare ourselves, but the players did a great job, nonetheless. Despite losing to Japan, the players showed a great performance today and I am very proud of them. I was hoping for a miracle though. Compared to the Asian Games where we faced the U-23 teams from other nations, in this tournament we had to face the top teams, so that made a huge difference. Japan was the better team today and they deserve the win. The players gained great experience by playing against teams like Japan, Iran, and Iraq.