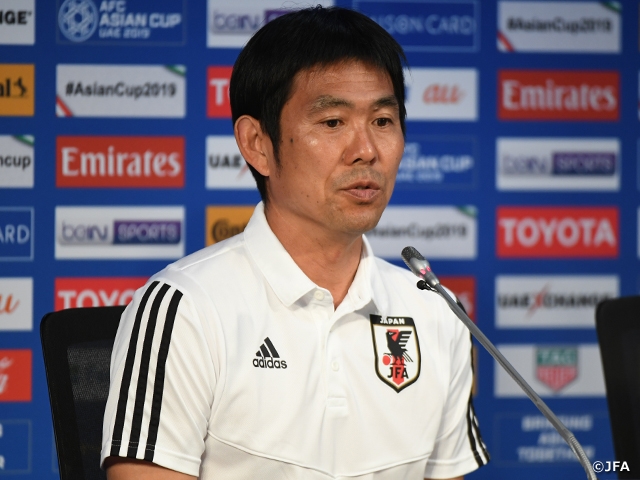 On Wednesday 23 January, Coach MORIYASU Hajime of the SAMURAI BLUE (Japan National Team) appeared in an official press-conference one day ahead of their quarterfinal match against the Vietnam National Team at the AFC Asian Cup UAE 2019. In the press-conference held at the match venue, Al Maktoum Stadium in Dubai, the Japanese coach stated, “We are well prepared as a team.”

Following their four successive close victories at the group stage and the round of 16, Japan will now face Vietnam at the quarterfinals.

While Japan is ranked 50th, Vietnam ranks 100th in the FIFA rankings. However, the team has risen from their 147th place in 2015 and shown great success at recent tournaments including their championship campaign at last December’s Suzuki Cup, also known as the ASEAN Football Championship.

With momentum on their side, Vietnam advanced through the group stage with their third-place finish at Group D, and won over Jordan, who led Group B over Australia, at the round of 16. For Vietnam, this will be their first quarterfinal appearance since the 2007 Asian Cup hosted by four Southeast Asian countries including themselves. The team is led by forward NGUYEN Cong Phuong, who has played for the Mito side at the J. League.

In recent years, Vietnam has shown great improvements in their under-age categories, as they finished in fourth place at the Asian Games held last summer, where they won over the U-22 Japan National Team led by Coach Moriyasu, 1-0 at the group stage.

Coach Moriyasu shared his thoughts ahead of the match, “We are preparing ourselves so that we can play to our full potential in our next match.” He continued on by stating, “We must brace ourselves for a very tough and difficult match. It is important that we enter the match with a challenger’s spirit while keeping confidence in the recent results we have gained.”

Japan will enter the quarterfinals with a two-day rest following their round of 16 match against Saudi Arabia, where as Vietnam is given a three-day rest. Regarding the short interval, Coach Moriyasu shared his aspiration, “We will do our best to recover within the given circumstance and enter the match in good condition.” Goalkeeper GONDA Shuichi (Sagan Tosu) also shared his take, “All of our matches were played under two-days rests at the Olympics. Everybody gathered here has experienced harsh match schedules, either at the J. League or at leagues abroad.”

On this day, the team arrived at the match venue to check out the pitch condition, but their actual training session took place at a different training field located in Dubai. The session was closed to the media except for the first 15 minutes, as the team went through their tactics ahead of the match. Forward MUTO Yoshinori (Newcastle United) will be unavailable for the next match due to cumulative yellow cards.

Defender TOMIYASU Takehiro (Sint-Truidense V.V.), who scored Japan’s only goal at the round of 16 mentioned, “We are recovering well and getting a good preparation.”

Midfielder SHIBASAKI Gaku (Getafe C.F.) shared his thoughts about their next opponent, “They are a very strong team with young talents and great momentum. When facing such team, we must enter the match with the intention to match or even exceed their work load.” 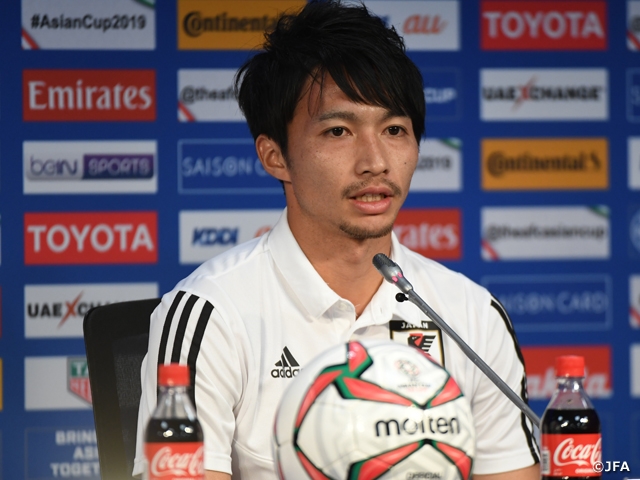 In this year’s Asian Cup, VAR (Video Assistant Referee) system will be employed starting from the quarterfinals.

MORIYASU Hajime, Coach of SAMURAI BLUE (Japan National Team)
With just two-day rest following our match against Saudi Arabia, this will certainly present us with a great challenge, but I want my players to recover both physically and mentally to prepare themselves ahead of the next match. I believe that we have been able to prepare ourselves well as a team. Coach Park of the Vietnam National Team has been looking over the under-age categories in the recent years to successfully construct a solid top team. We must brace ourselves for a difficult match while paying respect to our opponents and give our very best to earn a win. With or without the VAR, our approach will be the same. I have told my players to enter the match with the spirit of fair-play. We will stay focused to give our very best under the regulations.

DF #5 NAGATOMO Yuto (Galatasaray S.K.)
I am not as tired as I expected. Our team has gained great confidence after playing tough matches. Vietnam has overwhelmed the physical Jordan side by out running them. Tomorrow’s match will certainly be a tough one. If we insist on playing nice football, our opponents will run us down and counter us. I will focus on doing what’s best for the team and stay vocal even when we are forced to play patiently.

DF #22 YOSHIDA Maya (Southampton FC)
I was given a rest in our third group stage match, so I am not feeling fatigued as much. Vietnam has won a recent ASEAN tournament and they are carrying great momentum, so we must brace ourselves ahead of the match. Our performance must be solid as our tournament life depends on the result at each of the matches played at the knockout stage. We know what we must do in defence, so we will continue to execute our tasks. At the Champions League and the Olympics, the matches will be played with short intervals, so if we can earn positive results under this tough circumstance, it should help us grow as a player.

MF #6 ENDO Wataru (Sint-Truidense V.V.)
We may have the height advantage, but the players of Vietnam have great foot skills and they are capable of creating opportunities through their combinations. Our opponents will be carrying great momentum, so we must counter them with solid defence. It’s also important that we stay flexible to make adjustments on the pitch, which is something we did well in the match against Saudi Arabia. I am sure we will be facing a different type of match, but we’ll do our best to play solid defence and strive to score the first goal.

MF #7 SHIBASAKI Gaku (Getafe C.F.)
Winning the match has been the main emphasis, but we have also strived to showcase a better performance in each of our matches. During the course we have carried out many tactics and that has proved to be effective. However, the overall quality of our team is still work in progress and we are fully aware of it. That is why we need to improve ourselves through this tournament, and it will be a great achievement for Japan if we can win the trophy.

PARK Hang-seo, Coach of Vietnam National Team
The match against Japan will be a very difficult match for us, as Japan is one of the best teams in this tournament. They have players with great techniques and strengths. I am sure they will be the aggressor of the match from the beginning. It’s pretty obvious that they are the better team, but we are analysing them to find out their weakness. We will prepare ourselves well to strive for the win. Our initial goal for this tournament was to advance to the round of 16, and we have achieved that goal. We faced many strong teams during the group stage, and that experience might help us in our match tomorrow. But for now, we will just focus on out running our opponents. We will fight with no fear.