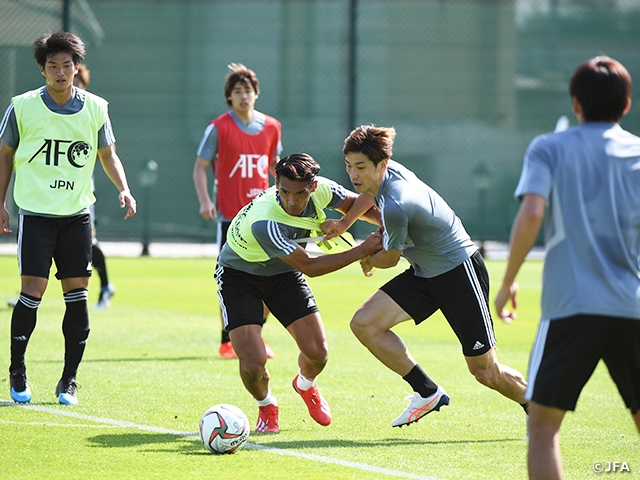 On Tuesday 22 January, one day following their round of 16 victory at the AFC Asian Cup UAE 2019 over the Saudi Arabia National Team, the SAMURAI BLUE (Japan National Team) trained in Sharjah ahead of their quarterfinal match against the Vietnam National Team scheduled in two days.

On this day, HARAGUCHI Genki (Hannover 96), TOMIYASU Takehiro (Sint-Truidense V.V.), who scored his first national team goal, and the other players who featured the starting line-up against Saudi Arabia remained at the hotel to recover themselves. The remainder of players, including the three players utilised as late substitutes, ITO Junya (Kashiwa Reysol), SHIOTANI Tsukasa (Al Ain FC), and KITAGAWA Koya (Shimizu S-Pulse), appeared on the pitch to work up a sweat. 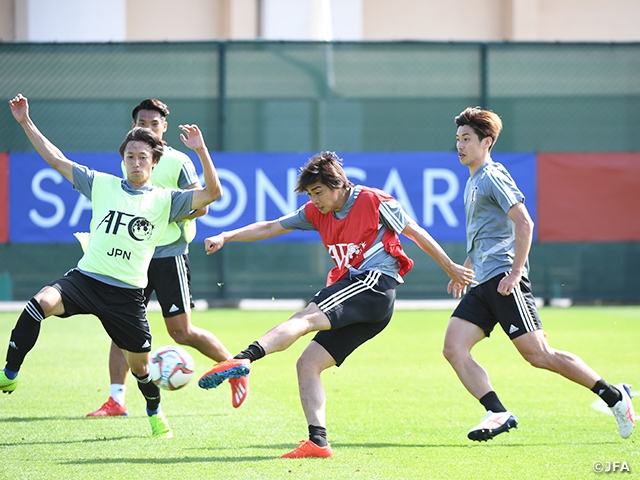 After the players went through their warmup routines, the team conducted a passing drill with restraints on their maximum touches. During this drill the players were seen showing great enthusiasm as it gave them time to relax and refresh themselves ahead of the next match.

The session proceeded with drills to go over their attacking patterns in small areas, followed by a shooting drill, and a 4 vs 4 drill with a freeman and goalkeepers. The players were once again restrained with their maximum touches, as they went through their transitions and pass-works within a small grid.

Goalkeeper HIGASHIGUCHI Masaaki (Gamba Osaka), who has been training under a separate menu, was seen joining the team session, as he was involved in the goalkeeper trainings and the 4 vs 4 drills. 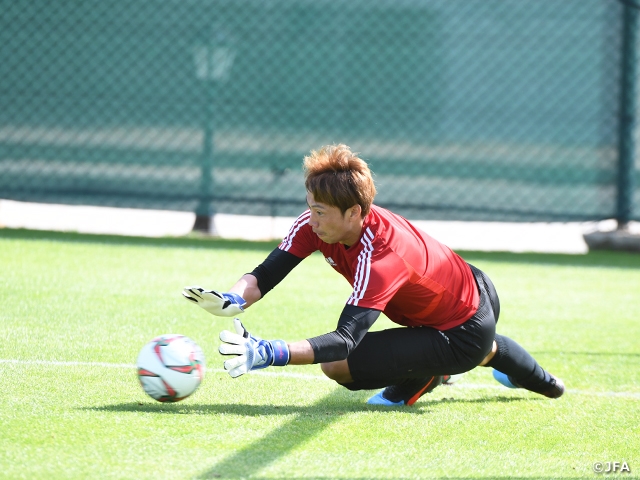 Following the team session, the players were divided into positions to work on their individual drills. While the attacking players such as INUI Takashi (Real Betis) and Kitagawa went through shooting drills, Shiotani was seen repeatedly taking free kicks to get a feel of his kicks, and Ito made numbers of runs down the line to deliver crosses. Also, forward OSAKO Yuya (Werder Bremen) was seen conducting sprints over and over with great intensity.

The team returned to their hotel after the session to take lunch and made their ways to the next match site, Dubai, in the afternoon.

On Wednesday 23, the team will have a chance to check out the pitch condition of their next match venue, Al Maktoum Stadium. However, they will only get a light walk through at the stadium, and their final training session will be conducted at a training field in Dubai.

Japan’s next opponent, Vietnam has advanced through the group stage in third place along with Iran and Iraq from Group D. At the round of 16, they have won over Jordan in penalty shootouts after drawing 1-1 in regulation time.

GK #1 HIGASHIGUCHI Masaaki (Gamba Osaka)
I feel the need to heighten my fitness in many aspects, so I will continue to work hard and condition myself. I have troubled the team with my injury, so I will do my best to contribute to the team and make up for it. Vietnam is a team with great momentum. I am hearing that their country is very enthused with the team’s success, so they will carry that momentum to the next match.

DF #3 MUROYA Sei (F.C. Tokyo)
We have faced many tough matches since the group stage, and anything can happen at the knockout stage. If we let our guards down, Vietnam will certainly exploit us, so we must be very careful entering the next match. Everyone who did not play in the match against Saudi Arabia are prepared to play at any given moment, and I am also eager to help the team out when I am given the opportunity. The reserve players will play a major role in tournaments like this, so I will keep on preparing myself to the fullest. Personally, I am truly honoured to just be here with the team, so I am in great mental condition.

DF #4 SASAKI Sho (Sanfrecce Hiroshima)
It was great that we managed to win against Saudi Arabia by defending through the one goal lead. The fact that the team showcased hard work to earn that victory will help us down the stretch. The coach will determine the next line-up, so we as players will continue to provide him with options by preparing ourselves in the best way possible.

DF #18 SHIOTANI Tsukasa (Al Ain FC)
Although our performance was not the best in yesterday’s match, it still means a lot that we managed to pull off a win. It’s important that we all insist on the results. Our next opponent, Vietnam, is a team that has improved dramatically over the recent years, and the fact that they are still in the tournament shows that they are a great team. I think they are a worthy team, and we must not play passively against them. It is important that we become the aggressor in the match, while staying mobile and winning the fifty-fifty balls.

MF #7 SHIBASAKI Gaku (Getafe C.F.)
In the match against Saudi Arabia, we were able to execute our game plan thoroughly and everyone was on the same page. It felt as if we were a single organism and shared a mutual consensus throughout the match. However, if we could have added another tempo, we might have done a better job in offence. We had many opportunities created from our counter attacks, and we need to improve the quality in the final third to convert those chances.

MF #10 INUI Takashi (Real Betis)
All the players who played in the match against Saudi Arabia played with great patience, and although our performance was not the best, the fact that we managed to win in that fashion shows that we have matured as a team. In the past, I have seen our team lose in similar matches, so it was impressive to see us win that match. I personally am getting great inspiration from the team. Although my performance was not great, I was given the opportunity to play 80 minutes in the other match and it allowed me to get my fitness and game intuition back. If I am given the opportunity, I will do my best to earn positive results.

FW #11 KITAGAWA Koya (Shimizu S-Pulse)
I am sure that Vietnam will come out playing with great persistency and we will face another tough match. However, if the opponents come out attacking, there will be spaces we can exploit, so I hope to penetrate those gaps. If we can induce the opposing defenders to press up, it allows us to hold onto the ball more. I hope to get more involved with our plays and make my presence felt on the field.