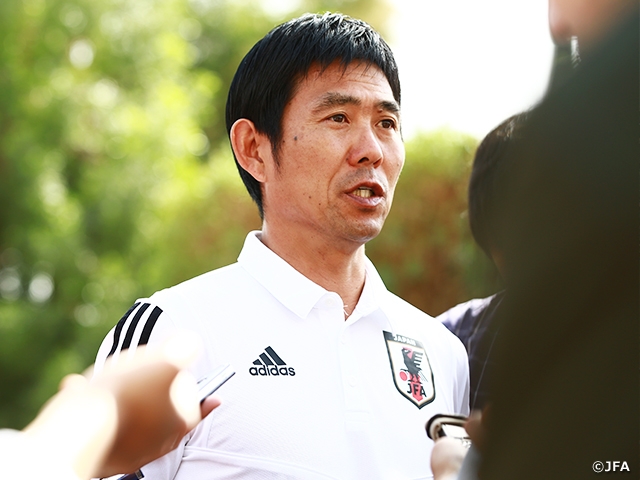 On Friday 18 January, one day after their match against Uzbekistan, Coach MORIYASU Hajime of the SAMURAI BLUE (Japan National Team) appeared in front of the media to answer questions in Al Ain. With the team advancing into the knockout stage of the AFC Asian Cup UAE 2019 as the group leaders with their three group stage victories, the coach showed his confidence towards the team’s “Persistency and Adaptability.”

The Q&A with the media are as follows.

―The team earned a win over Uzbekistan with a totally rotated line-up. Has it given you more confidence towards your team?
All three matches we faced in the group stage were difficult matches. Prior to the tournament, I was expecting that we will be challenged in every singe match at the Asian Cup, but the group stage has really made us realise that thought. The team is gaining great experiences through these tough matches and we are given the opportunity to deepen our team consensus. It’s unfortunate that HIGASHIGUCHI is unavailable to play, but for the rest of the team, we are seeing more improvements in our fitness level after yesterday’s match. The team is showing great understandings in our tactical concepts and the fact we are gaining positive results from it, gives us great confidence moving forward.

―In the match against Uzbekistan, Muto scored a goal. Despite OSAKO being out with an injury, how big is it to see your forwards scoring goals?
Yes, it helps the team a lot to see the forwards scoring goals. When the goals are coming from the players who are expected to score, it allows the team to share a mutual understanding on how to carry the ball upfront. The goal was a huge confidence booster not only for the player himself, but for the entire team.

―Entering the knockout stage, the team will be required to travel and play matches with only two or three days rest. How will you cope with this schedule?
Starting from the training camp in Japan, the players have been restrained by the team for a long period of time, and they must be feeling the fatigues in both physical and mental aspects. That is why we must allow our players to refresh themselves as much as possible ahead of the next match, while we also prepare ourselves tactically and physically in the best way possible. The fatigues will accumulate. The amount will differ based on the playing time, but everyone is using their head in these matches, and that process will exhaust the team. In order to rest up the mental aspect, the players must utilise their time-off wisely, while focusing on the training sessions.

―Have you seen improvements on the inconsistent fitness level among the team?
With the team consisting players playing in the domestic leagues and foreign clubs, it makes it hard to maintain a certain condition level. Especially because some of the players playing abroad weren’t able to join the team until the last minute. In order to showcase the full strengths of the team, it is essential to heighten the physical conditions of the players. That is why we took a great emphasis on improving not just our tactical aspects, but our fitness aspects in each match we played. By the time we played three matches, most of the players were given the opportunity to start a match and it has allowed us to build sufficient endurance and game intuition ahead of the knockout stage. 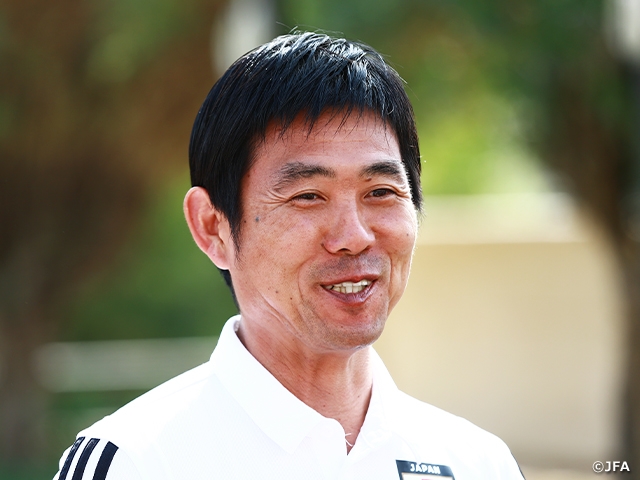 ―After playing three matches, what are the aspects you feel confident about your team?
Especially after watching the first match, I believe that persistency and adaptability are essential qualities on the pitch. It is our job as coaches to allow the team to prepare themselves in the best way possible, but once the game starts, the players must make the adjustments according to the events on the pitch. We must be able to exploit the opponents’ weak-points, while we adjust to the opponents’ approach. It was evident in our match against Uzbekistan, where the team kept their chin up after conceding the opening goal, and they made the necessary adjustments to equalise and eventually take the lead.

―So are you implying that you are feeling confident about the upcoming matches at the knockout stage?
Yes. When we are moving the ball with great pace, and when our players are combining well with each other, we can be a very difficult team to face against, and our players are fully aware of that. We must create those kinds of stretches and finish our plays with shots. The team must strive for higher standards. The team has displayed great speed in their transition between offence and defence, while showing great persistence in defence, so if our players can make the right decisions at each situation, we should be able to showcase a good match at the knockout stage. We must be ready to face tough matches and stay patient when things are not going our way. We will enter each match with a strong intention to fight with great persistence so that we can win the match at the end.

―Ahead of the match against Uzbekistan, you asked the team to heighten the team cohesion. What are your thoughts on that aspect?
Depending on who you are playing against, our condition level, situations surrounding the individual positions, and how the opponents make the adjustment on the pitch, I want my players to stay flexible and adapt to the match. For a strong team that can win matches, that is an essential quality, so I will keep demanding my players in that aspect.

―By placing emphasis on communication with the players, are you seeing more unity with the team?
I don’t want my players to hold back on their thoughts and I want them to play with a clear mindset. That is why I am keeping the conversations as open as possible. In order to give my players the best chance to gain positive experience and improve as a player, I want to build a relationship where we can all be our true selves.

―What is your impression on the Round of 16 opponent, Saudi Arabia?
I have an impression that they are technically sound and strong. I haven’t looked in detail yet, but with their experience at the FIFA World Cup, they are one of the top-class teams in Asia. We will closely analyse their matches and prepare ourselves ahead of the match.

―With the next match kicking-off at 3 p.m., are you worried about the hot weather?
We have experienced a 3 p.m. match in our first group stage match. The temperature was especially high on that day, so we hope to utilise that experience and prepare ourselves in the best way possible.

Ahead of their round of 16 match against Saudi Arabia on Monday 21, the team had their first day-off since arriving to UAE.

The players were given the freedom to utilise the time in the morning, as many were seen working a sweat at the gym. The team then left Al Ain in the afternoon to make their ways to their next match site, Sharjah, as they arrived at their hotel in the evening.

The team will resume their trainings on Saturday 19 ahead of their match against Saudi Arabia. 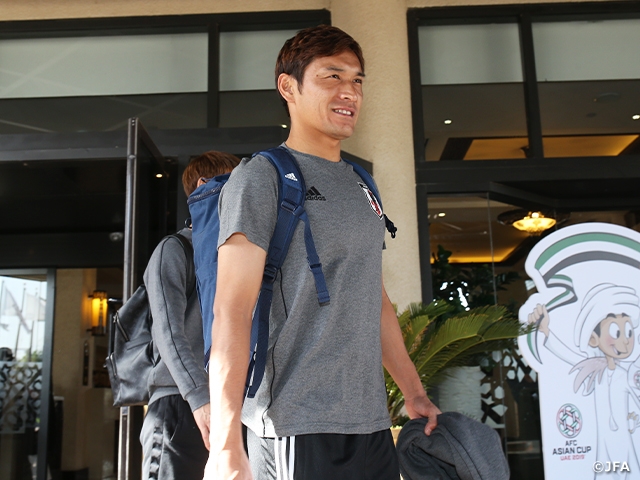 The Asian Cup has concluded its group stage on Thursday 17, and the schedule for the knockout stage has been determined. The round of 16 fixtures for the other teams are as follows.

DF #20 MAKINO Tomoaki (Urawa Red Diamonds)
Prior to last year’s World Cup, we played a match against Paraguay with the so-called “reserve squad” and it allowed us to unite as a team. This time, we managed to win our third match with the reserve squad and brought the team up to a higher finish in the group stage. We are seeing more unity among the team. Through the last match, I also feel like we were able to prove our point that we all deserve to play in the match. I think it is a good thing that we are seeing an intense competition for the starting line-up.

MF #14 ITO Junya (Kashiwa Reysol)
We entered the match against Uzbekistan with an unfamiliar line-up, and although we struggled to get our timings right, I am glad we were able to win the match. Despite creating many opportunities, I am disappointed that I wasn’t able to get myself involved in our goals. We need to improve the quality of our shots and prepare ourselves so that we can win the match regardless of the line-up.

FW #11 KITAGAWA Koya (Shimizu S-Pulse)
As long as I can showcase my own playing style, I feel like can keep improving myself. We have more tough matches scheduled ahead of us, so the entire team must contribute to earn three points. I am confident that I can do better. The match against Uzbekistan was not the last match of this tournament, and our journey doesn’t end at this tournament neither, so I will keep working hard to improve myself.