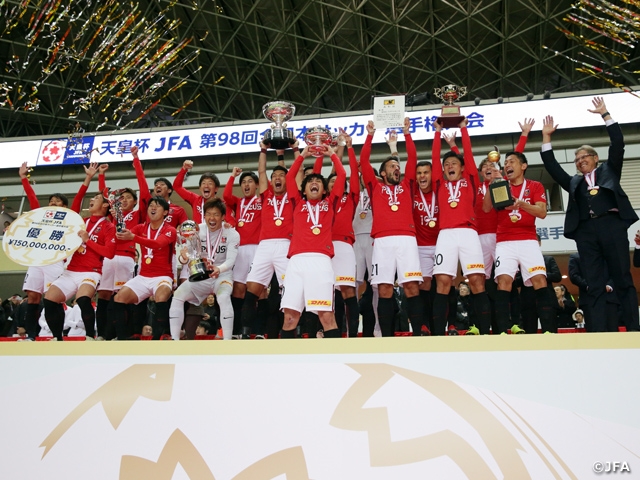 On Sunday 9 December, the Emperor's Cup JFA 98th Japan Football Championship Final was held at Saitama Stadium 2002. In a match that featured two J1 sides, it was Urawa Red Diamonds who prevailed against Vegalta Sendai, to earn their seventh overall Emperor’s Cup title, which is tied as the second most in tournament history.

The match started with the Sendai side taking control of the ball possession. Through their quick ball movements, they attacked deep into the opposing territory and took the upper hand to win the loose balls. However, it was the Urawa side who struck the first goal. In the 13th minute, UGAJIN Tomoya responded quickly to a loose ball following a corner kick taken short, as he blasted a powerful volley to capture the net. 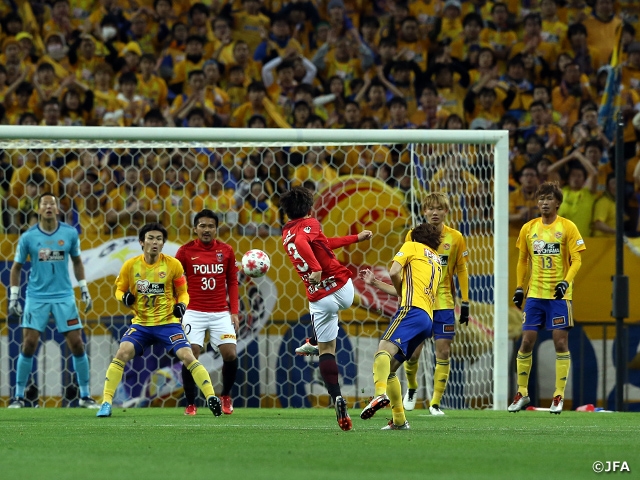 With momentum on their side, Urawa started to increase their pressure upfront following their opener. Sendai responded with efforts made by GERMAIN Ryo and ISHIHARA Naoki, but they came short from equalising the match in the first half.

The second half saw an equally matched battle for a while. In efforts to score a goal, Sendai brought in ABE Takuma and SEKIGUCHI Kunimitsu in the 67th minute and started to create opportunities to level the match. However, the shot taken by Abe was saved by the opposing goalkeeper, while NOTSUDA Gakuto’s header also failed to capture the target.

In the closing minutes of the match, Sendai pushed up ITAKURA Ko to play upfront, but led by ABE Yuki and MAKINO Tomoaki, Urawa displayed a persistent effort to sustain their lead. Following his mid-season arrival to the team, Coach Oswaldo OLIVEIRA has successfully granted Urawa with the Cup title as well as the ticket to next year’s AFC Champions League (ACL). The veteran coach shared his gratitude towards the team’s supporters after the match, “We were expecting a defensive match today. The presence of the supporters has really allowed our players to play beyond their limits.” On the other hand, Sendai’s Coach WATANABE Susumu showed his disappointment, “Ugajin’s superb goal has put us in a very difficult situation. The team did well to move the ball around and create opportunities but lacked that final effort to capture the goal.”

Oswaldo OLIVEIRA, Coach (Urawa Red Diamonds)
This has become a very special match for us. Under regular circumstances, we would have missed six of our players. While MAURICIO couldn’t play in the match, we had a tough game time decision for the other players. However, the players showed great commitment and dedication towards the team by performing within their limited abilities to help the team. I would like to thank all the staffs for making it possible for these players to play today, and I would also like to thank the players for their professionalism.

DF #3 UGAJIN Tomoya (Urawa Red Diamonds)
I have been practising (the mid-range shots following set-pieces) in our training sessions. Coach Oliveira has trusted me to be in that position to strike those shots following set-pieces. The goal was a bit too good to be true, but I am very happy to be able to score the game deciding goal at this final. We knew that Sendai takes a zone coverage when facing set-pieces, so we were anticipating for those loose balls. During the training sessions, I often times got under the ball too much, so I worked on this play many times even after the sessions, and I am glad it paid off.

WATANABE Susumu, Coach (Vegalta Sendai)
With the help of our wonderful supporters, the players were able to fight through the entire 90 minutes, despite the tough match schedule. We knew that if there were any chance of giving away a goal, it would come from a restart or a counter attack. In reality, Ugajin’s superb goal has put us in a very difficult situation. The team did well to move the ball around and create opportunities but lacked that final effort to capture the goal. This result is very difficult to swallow, and the disappointment we are feeling right now is so much more than the happiness we felt after winning the semi-final.

MF #23 NAKANO Yoshihiro (Vegalta Sendai)
We managed to move the ball around well and created many close opportunities, but we lacked quality in the final third. I feel like that was the difference that separated the two teams today. We created more chances in the first half than usual but failed to convert them. I personally had some close moments where I felt like I could have done better, and the match really made us realise that we must heighten our quality of plays more. 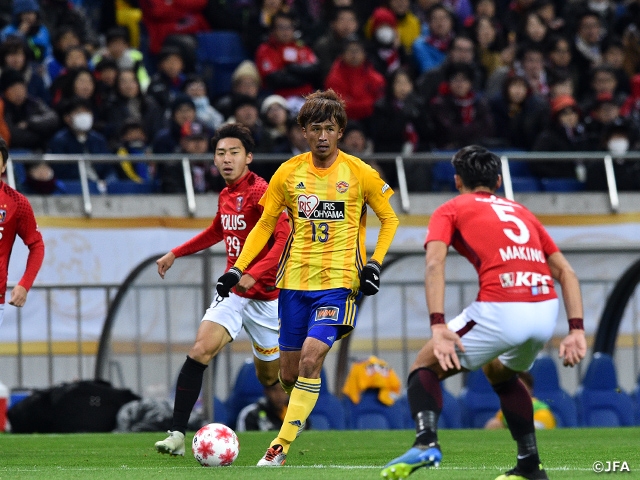