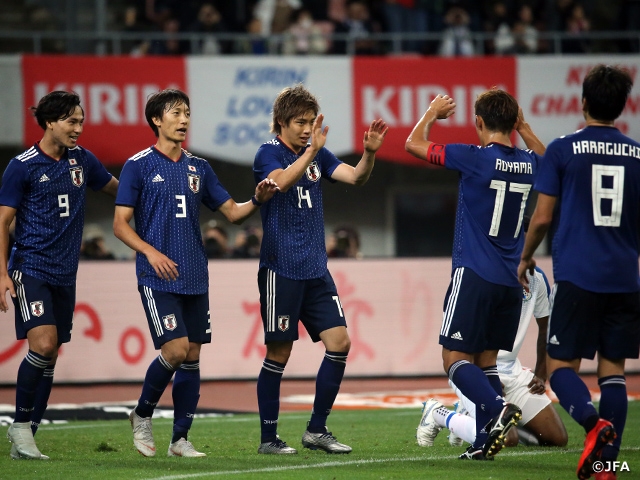 The starting line-up featured players who started in last month’s Costa Rica match (3-0) where Coach Moriyasu took the helm for the first time, as Minamino and Ito once again took the field, while players who participated in the 2018 FIFA World Cup featured the front line, such as OSAKO Yuya (Werder Bremen) and HARAGUCHI Genki (Hannover 96). TOMIYASU Takehiro (Sint-Truidense V.V.) was named in the defence line and goalkeeper GONDA Shuichi (Sagan Tosu) made his first start since March 2015. With the 19-year-old Tomiyasu starting the match, it marks the first time a teenager has made the national team debut since MIYAICHI Ryo made his debut on May 2012. 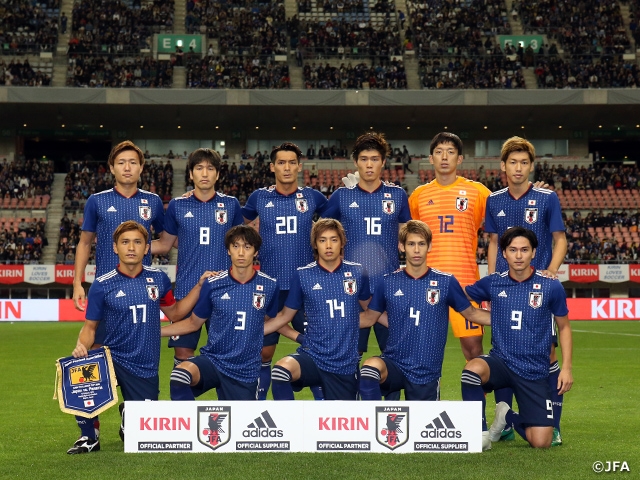 Japan started off the match with aggressive pressure applied from their front line as Haraguchi made an interception before sending the ball to SASAKI Sho (Sanfrecce Hiroshima), who was overlapping in the left flank. Ito made an effort to connect with Sasaki’s cross but couldn’t convert the opportunity.

Haraguchi and Minamino led their offence to create opportunities, but the Panama side who featured 10 ex-World Cup players in their starting line-up showcased persistent efforts in defence to keep Japan out from scoring a goal. Their midfielders Michael MURILLO and Aníbal GODOY forced turnovers in the midfield to initiate counter attacks.

However, Japan also kept Panama away from reaching their goal as the defence line along with the defensive midfielders MISAO Kento (Kashima Antlers) and AOYAMA Toshihiro (Sanfrecce Hiroshima) responded well to keep the score intact.

An opportunity came Japan’s way in the 23rd minute when Aoyama delivered a pass towards the right flank where MUROYA Sei (F.C. Tokyo) made an overlapping run before sending the ball towards the goal. The Japanese forwards made their efforts to connect with this delivery but failed to capitalise.

Following the 35th minute mark, Japan finally started to find their rhythm in offence. In the 39th minute, Tomiyasu delivered a long ball to Osako who penetrated the penalty box before cutting back the ball to Ito, as they came close to scoring the opening goal.

In the 41st minute, Aoyama delivered a through ball to Haraguchi who struck a shot that was blocked by the opposing defender. The long awaiting moment came just a minute following this shot taken by Haraguchi, as Aoyama intercepted the ball before sending the ball to Minamino, who dribbled up the field before striking a left footed shot that captured the goal. 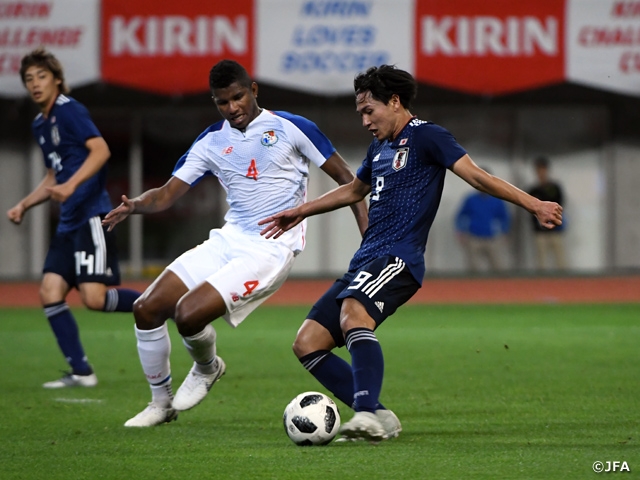 With the match entering the second half with a 1-0 lead for Japan, Panama brought in midfielder Armando COOPER, who also participated in the recent World Cup, to energise their attacks. In the 56th minute, Murillo, who shifted into a right fullback position, carried the ball upfront and delivered a cross between the Japanese goalkeeper Gonda and the defence line to threaten the goal. Forward Abdiel ARROYO also made an attempt to penetrate the box around the 60th minute mark, but Tomiyasu responded well to deny this opportunity.

The second goal for Japan came in the 65th minute when Haraguchi passed the ball to Ito, who then delivered the ball to Minamino. The shot taken by Minamino was blocked by the goalkeeper, but Ito managed to collect the ball and take another shot with his left foot. His effort was once blocked by the opposing defender, but the ball fell in front of Ito again, allowing him to capitalise on the loose ball.

After scoring their second goal, Japan subbed out Osako and Minamino for KITAGAWA Koya (Shimizu S-Pulse) and KAWAMATA Kengo (Jubilo Iwata), followed by another change made in the 81st minute, when DOAN Ritsu (FC Groningen) took the place for Ito who injured his leg. With these substitutions, Kitagawa made his national team debut.

Soon after the changes were made in their line-up, Haraguchi dribbled up the field and delivered a pass to Kawamata in the 85th minute. The delivery freed up Kawamata to take on the goalkeeper one-on-one and his left-footed shot went in after it deflected off an opposing defender who made an effort to clear the ball out of the goal.

Japan managed to keep a clean sheet and won the match with a final score of 3-0. As a result, the team has now registered two consecutive victories under the new regime of Coach Moriyasu.

The SAMURAI BLUE will now face the Uruguay National Team, who is ranked fifth in the FIFA Rankings, on Tuesday 16 October at Saitama Stadium 2002.

MORIYASU Hajime, Coach of SAMURAI BLUE (Japan National Team)
I am very thankful for all the supporters who watched this match, either at the stadium or through the TV. I am glad we were able to keep a clean sheet and capitalise on our chances to win the match. Not only the players who played on the pith, but every player showed great intention to understand what we were trying to achieve at each training session and shared their thoughts on and off the pitch to make the team better in the short period of time. The players’ efforts have given us this result. The starting line-up featured a player who was making his national team debut at the top level, and combining with the experienced veterans, I believe we were able to see a fusion among the team that showcased an overall improvement in the strategical aspect. I am not sure if there was a clear chemical reaction, but I am certain that this match has allowed us to make a positive step forward. The players entered the match with the intention to play collectively and showed us the potential to become a much better team. Facing a team who has great speed, physical strengths, and the ability to carry the ball, our players did well to stay patient and defend persistently both as an individual and as a team. We did make some mistakes, but we showed our intention to make up for those mistakes, while the other players also reacted to take cover in those situations. We managed to display a positive match as a team. However, when we look at our performance in details, there were many situations that needs to be addressed in both offence and defence. We hope to heighten our quality and keep our focus high ahead of our next match.

DF #16 TOMIYASU Takehiro (Sint-Truidense V.V.)
I couldn’t seem to concentrate until the match started, which was a totally new feeling for me, so I was really worried prior to the match. However, once the match has begun, I was able to perform the way I usually do, so I am relieved by that. The older players kept on giving me words of encouragement, and Makino told me to just “Enjoy the game,” which allowed me to stay relaxed and play without hesitation.

MF #8 HARAGUCHI Genki (Hannover 96)
The young players showed their intention to earn good results at this match, while the older players were playing with a sense of a new start with positive vibes. Our opponents came out with great intensity and power, which we struggled to react against in the first half, but we managed to stay composed and select our chances effectively in our attacks.

MF #9 MINAMINO Takumi (FC Red Bull Salzburg)
I feel like we managed to create a good rhythm in our offence by utilising both the inside and outside of the field. From the training sessions, we were told to attack aggressively when we see the opportunity, so I was anticipating for my chances while watching the flow of the mage and our opponents’ positions. However, when we look at the details, I am not satisfied with the quality of our performance, so we must work hard to heighten the quality of our plays.

MF #17 AOYAMA Toshihiro (Sanfrecce Hiroshima)
This is a positive result for the team, since we won the match 3-0, but we made more mistakes than our last match and couldn’t seem to find our rhythm when we carried the ball upfront, so we must make the adjustments ahead of our next match. We need to carry the ball up higher from the build-ups and play more direct balls upfront more often. Once we can find our rhythm as a team, we might be able to see more improvements.

Gary STEMPEL, Coach (Panama National Team)
I think we performed better than what the 3-0 score indicates. The first half featured some very intense battles, and although we managed to create chances from our side attacks, we couldn’t capitalise on those opportunities. Conversely, we gave up three goals in unfortunate fashion, so I am not satisfied with this result. Japan showcased their great ability to possess the ball, and we struggled to respond against the side attacks involving their #14, #15, #9, and #3 players, but I don’t think that was the reason we conceded the three goals.