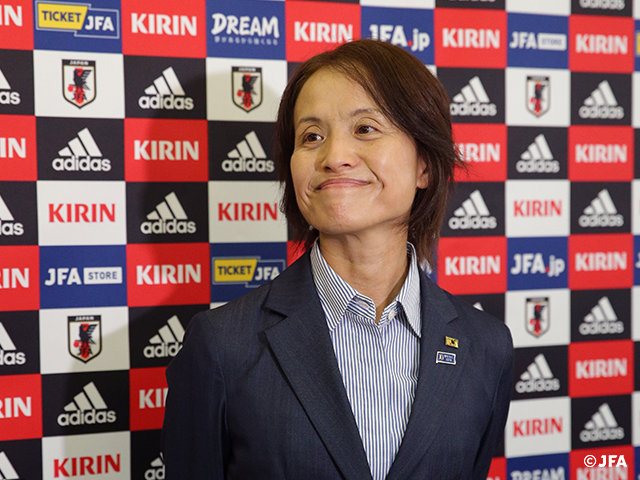 *1 UTSUGI, NAOMOTO, and KAWASUMI are scheduled to join the team on Mon. 23 July at Denver
*2 KUNITAKE called up to NADESHIKO JAPAN for the first time

Following last year, we will once again participate in the Tournament of Nations and I have announced the squad for the tournament. After watching her performance in the league matches, I have elected to call up a national team debutante defender KUNITAKE Aimi (Nojima Stella Kanagawa Sagamihara). She presents the potential to exert individual strengths during a match, and I wanted to give her a try in this squad. Most of the other players are usual faces, but we excluded KUMAGAI Saki (Olympique Lyonnais/France) due to schedule conflicts with her club, and SAKAGUCHI Mizuho (Nippon TV Beleza) due to injury. I am looking forward to seeing who steps up in that leader role, as we are lacking our core players. Last year, we failed to play our game and came back empty handed, so we would like to show the world just how much we have improved since. This is a restart ahead of next year’s World Cup and we will continue to look for new talents and build up on what we have worked on thus far.