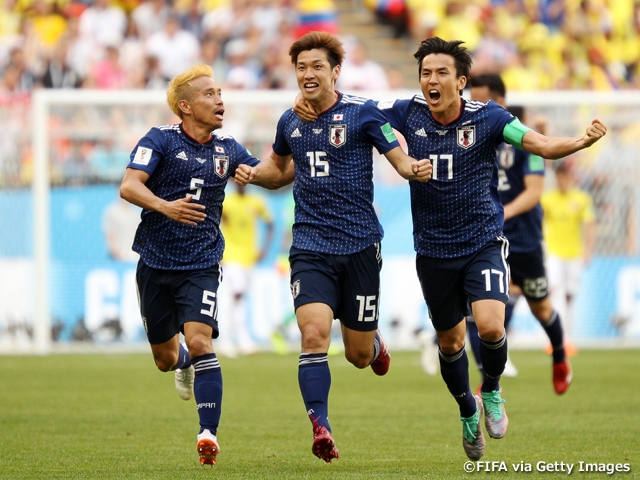 SAMURAI BLUE (Japan National Team) started off the 2018 FIFA World Cup Russia with a victory. On Tuesday 19 June, Japan won against Colombia 2-1 in their Group H opener held at Mordovia Arena in Saransk. It was Japan’s first victory in the World Cup since the 2010 World Cup in South Africa.

Japan grabbed the lead early in the first half with a penalty kick converted by KAGAWA Shinji (Borussia Dortmund). Despite allowing Colombia to level the match by halftime, OSAKO Yuya (Werder Bremen) scored the decider in the 73rd minute off a corner kick.

For Japan, World Cup Russia opened with a match against Colombia, who they suffered a 1-4 loss in their final group stage match in the previous World Cup in Brazil. Five players who experienced the loss, goalkeeper KAWASHIMA Eiji (Football Club de Metz), NAGATOMO Yuto (Galatasaray S.K.), YOSHIDA Maya (Southampton FC), HASEBE Makoto (Eintracht Frankfurt), and Kagawa were named in the starting line-up. While SAKAI Hiroki (Olympique de Marseille) and SHOJI Gen (Kashima Antlers) joined the defensive line, Coach NISHINO Akira’s intention to “take the initiative in the midfield” was present as SHIBASAKI Gaku (Getafe C.F.), HARAGUCHI Genki (Fortuna Dusseldorf), and INUI Takashi (Real Betis) were named in the midfield along with Osako as the lone striker. 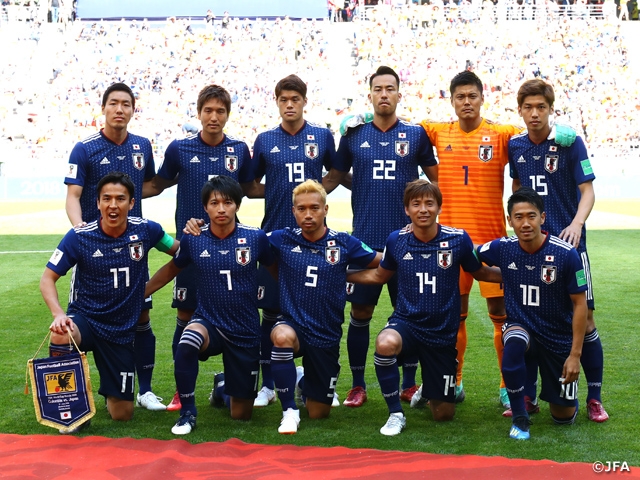 Colombia also started four players who played in the match four years ago, however, James Rodríguez sat on the bench as he was returning from Injury, while Radamel Falcao and Juan Quintero started upfront.

Despite the low humidity, the temperature rose up to 32 degrees Celsius. With majority of the crowd cheering for the Colombian side, the match started with an away-like atmosphere for Japan, however, the match saw a quick turn of an event.

In the third minute, the Japanese defence line delivered a pass to Osako, who fought for the ball against the opposing defenders before launching a shot with this left foot. The shot was deflected by the goalkeeper, but Kagawa was there to fire another shot at the open goal, which induced a hand ball from Carlos Sánchez in the box. Sánchez was sent off with this play while Kagawa converted the penalty kick to give Japan the opening goal. 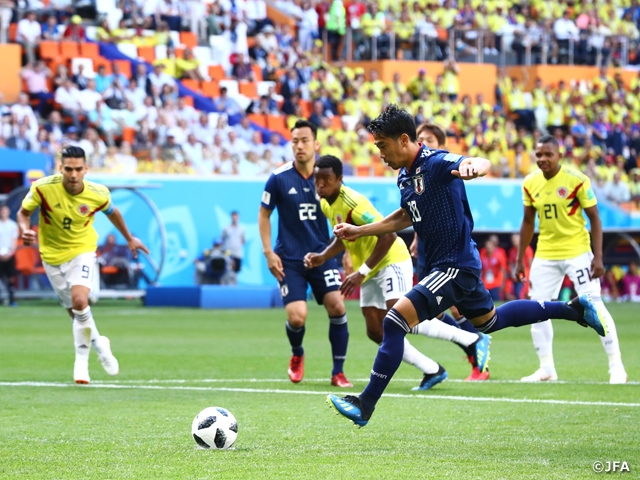 With a man down, Colombia brought Quintero to a lower position and shifted their formation from 4-2-3-1 to 4-4-1.

From this point on, the match saw more ball possession from Japan. In the 15th minute, the Kagawa-Inui hotline created a goal scoring opportunity as Inui penetrated the box from the left side, curling a shot to the far post, but the ball sailed just off the target.

Despite the one-man advantage, Japan conceded the equaliser in the 38th minute. Hasebe’s challenge against Falcao was called a foul, giving Colombia a free kick just outside the box. The free kick taker, Quintero snuck a grounder underneath the Japanese wall, slotting the ball into the right-hand corner of the goal to level the match.

After entering halftime with a tied score of 1-1, Japan started off the second half with an aggressive approach. In the 54th minute Osako fired a shot after receiving the ball from Kagawa, followed by Inui’s shot in the 57th minute. Japan kept on threatening the Colombian goal, as Saki came close on the 61st minute off a free kick.

In efforts to break the deadlock, Japan brought on HONDA Keisuke (CF Pachuca) in the 70th minute as a substitute to Kagawa. Just three minutes later, it was Honda who assisted the go-ahead goal.

Japan carried the ball up the right flank, sending a pass to Osako, who possessed the ball in front of the goal before laying a pass to allow Sakai to take a shot. Sakai’s attempt gave Japan a corner kick, which was taken by Honda. Japan capitalised on this corner kick as Osako found the net with his header.

The Japanese side went onto preserve this one goal lead to earn a 2-1 victory, gaining precious three-points in their first match of the Cup.

In the other match of Group H, Senegal bested Poland 2-1, placing Japan and Senegal at the top of the group with three-points apiece.

Japan will now face Senegal in their second group stage match on Sunday 24 June at Ekaterinburg.

NISHINO Akira, Coach of SAMURAI BLUE (Japan National Team)
We managed to enter the match aggressively, and not only score the opener, but also gained a numerical advantage throughout the match. However, being a man up doesn’t always mean we have advantage in all aspects. We still had to take advantage of the situation to take control of the ball possession, while seeking for advantage in both offence and defence. After we scored the goal, we still gave up situations where Colombia had more players while possessing the ball, so I told my players to make more runs in the second half to create a greater advantage in ball possession. The players did just that in the second half as we gained more ball possession and exhausted the Colombian attackers like Falcao. We were determined to win this match and created many opportunities from set plays. The team’s ability to make the necessary adjustment during halftime, and their endurance allowed them to surpass Colombia. The fact we managed to control the match in the second half led to our second goal. It helped that the team entered the match smoothly while displaying an aggressive and tough approach.

With our eyes set for the biggest prize, this victory in the first match gives up a great advantage, but we still have tough matchups to follow in our second and third match. In the next four days, we will focus on how to showcase our strong point while preparing for our next match.

GK #1 KAWASHIMA Eiji (Football Club de Metz)
Even though our opponents were left with 10 players just three minutes into the match, the fact we managed to pay off the loss we suffered four years ago means a lot to us, and it also gives us another reason to gain confidence after all the situation surrounding us with the coach change. There is a part of me that hasn’t moved on since that match, so in that sense, we can finally move on.

FP #7 SHIBASAKI Gaku (Getafe C.F.)
Either we are facing 11 or 10 players, I was focused to get involved with the ball as much as possible. With our opponents being a man down, it made it easier for us to control the ball, but we still had our plans to expand the plays and made adjustments effectively during halftime. We entered the match with the intention to outwit our opponents, and I feel like that penalty kick we induced was a result of our approach.

FP #10 KAGAWA Shinji (Borussia Dortmund)
The penalty kick was a result of Osako’s persistent play, and I was fortunate to collect the loose ball while I anticipated for the goalkeeper’s deflection. The fact I managed to convert the goal and gaining the one-man advantage had a major impact to the outcome. Since I earned the penalty kick, there was no doubt in my mind to take the kick. I have put in the practice for it, so I was glad it materialised. We did feel the difficulties of the first match of the tournament, but we are glad we sealed the deal with Osako capitalising on Honda’s delivery.

FP #15 OSAKO Yuya (Werder Bremen)
Scoring a goal in the World Cup was a childhood dream for me, so I am very happy to be able to score in this World stage. The coach has told us not to be passive and we have told each other to attack aggressively from the beginning. I am glad I won the battle against the defender in the scene where Kagawa scored the opening goal. This really make’s the four years I’ve played in Germany all worth it.

TASHIMA Kohzo, JFA President
It is a major accomplishment to win the first match, but how we play the next two matches will be as important. The players will learn out of these matches and gain more and more experience. Our job is to preserve and pass on those experience in Japan. We experienced the tragedy of Doha and lost a match facing Drogba. These experiences allow us to build the tradition of Japanese football, and we must learn from it.

José Pékerman, Coach (Colombia National Team)
We lost an important player in the first three minutes of the match. Even though we managed to equalise with a man down, Japan displayed their style well in the second half and capitalised on their chances. We couldn’t possess the ball as much and even when we brought in James, Japan kept on playing with confidence. However, the fact we managed to level the match while playing a man down gives us hope that we can win the next match. We will cancel out this lose with the results of the next two matches.