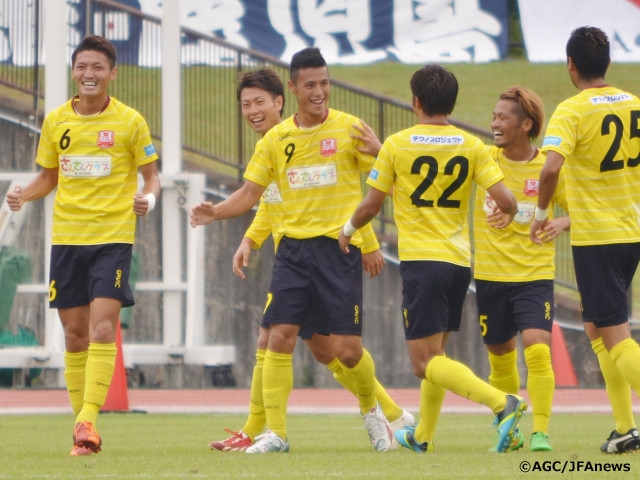 The first round of the 95th Emperor's Cup All Japan Football Championship on Saturday 29 August saw the match between Matsue City FC (Shimane) and Kagoshima United FC (Kagoshima) at Matsue Athletic Stadium.

Matsue City, who belong to the Chugoku Soccer League, had just become back-to-back champions a week before, while Kagoshima United finished in fourth place in the second year of the JFL after 22 games.

Kagoshima United kept possession from the beginning, while Matsue City was waiting for opportunities to counter-attack. Matsue City struck the opener. After 16 minutes, TANIO Koya received a pass from SHIBUYAMA Yuki, who dribbled through to the opponent’s area, and struck a goal with his right foot. The ball went through between Kagoshima United’s defenders to the back of the net, on the other side from that of the goalkeeper.

Although Kashima United kept possession, they could not create many goal-scoring opportunities in the first half against Matsue City, who had had the lead. However, in the 48th minute, just at the beginning of the second half, the team earned a penalty kick from the opponent’s foul, which should have been a perfect opportunity to level the game. Unfortunately, though, YAMADA Yuya’s shot went to the other side of the goalkeeper, only for it to hit the right goalpost.

Kagoshima United substituted Nenad Živković, the 193-centimetre tall forward, onto the pitch, continuing the attack against a tired opponent. Matsue City, however, did not lose their concentration until the final whistle, keeping their one-goal lead. They only took two shots in total – one in the first half, which struck the opener and the other in the second half. The team played very tenaciously and won the game.

Matsue City claimed their first victory in their second Emperor's Cup, being encouraged by local fans. It was the first win in four years for a team from Shimane. The team will meet Kawasaki Frontale (J1) for the second match on 5 September.
Match detail (Japanese version only) 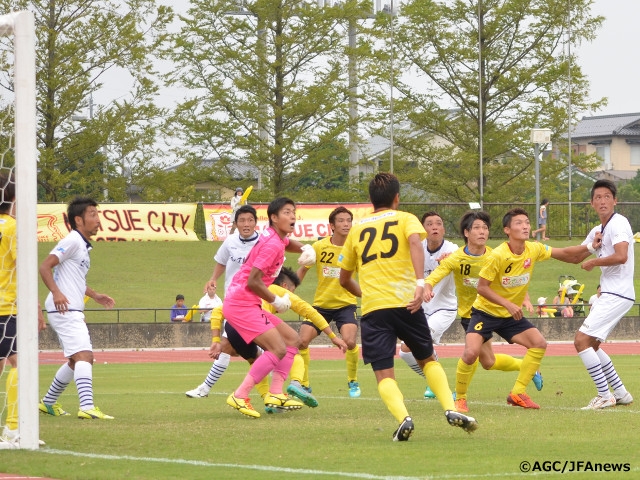 KATAYAMA Hiroyoshi, Coach (Matsue City FC)
We wanted to push our boundaries in today’s game, thinking of our possible promotion to the JFL next year. Doing what we could do properly led us to a victory. Having said that, there are still many problems to be fixed and individual skills to be improved. I’d like to focus on them systematically as a team.

The coming opponent, Kawasaki Frontale, are playing in the professional league J1, while we’re one of the teams in the local league. So we have nothing to lose. We’ll analyse them through videos to get ourselves ready.

TANIO Koya (Matsue City FC)
When I struck a goal, I just took a shot with no hesitation, as it was one of my shooting courses. While the opponent was keeping possession, it was very tough to press them. However, I had built up my stamina throughout Yonago Kita High School period, and I could run until the end.

As I got a call this morning from Kawasaki Frontale’s scout, and I was told: “win the game with your goal before coming back to Kawasaki”, I am so glad that I did so. Kawasaki Frontale is one of the oldest teams, who belong to the best league in Japan. I am looking forward to playing against them. I’m really excited about it!

ASANO Tetsuya, Coach (Kagoshima United FC)
I feel really frustrated with the result. However, we just couldn’t get through the opponent, to be honest. Although the players played hard, the game didn’t go well for us. We did have opportunities to level the game, but we couldn’t, and that’s just football.

Besides, we got rattled and couldn’t perform with our normal accuracy, especially when we had to create goal-scoring opportunities. We know that the result is everything. We were careful to start the game. It’s just frustrating that we couldn’t get a good result.

TANOUE Yutaka (Kagoshima United FC)
At the beginning, we pressed to gain the loose ball, taking a shot or sending a cross. However, after 10 minutes, the opponent started to play better, and we couldn’t reach the loose ball any more. We should have continued what we did at the beginning. Then the opponent started to press, and we let them strike a goal through a counter-attack.

Although I really wanted to play against a J1 club team, our main aim is to be promoted to J3, which will pump up Kagoshima football. So I’d like to refresh my mind to play as a united team for that aim, and do our best. 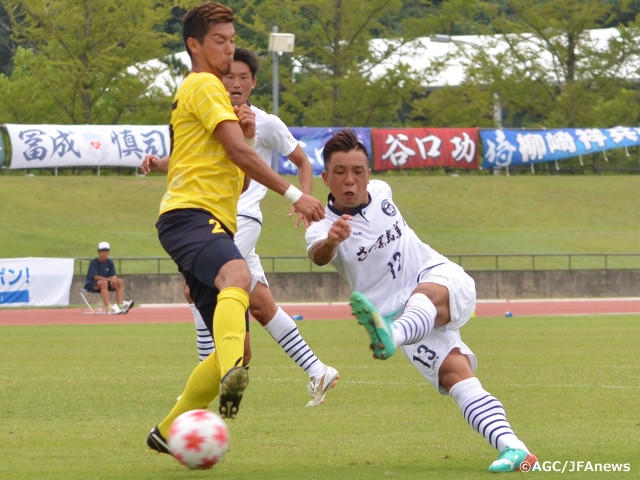