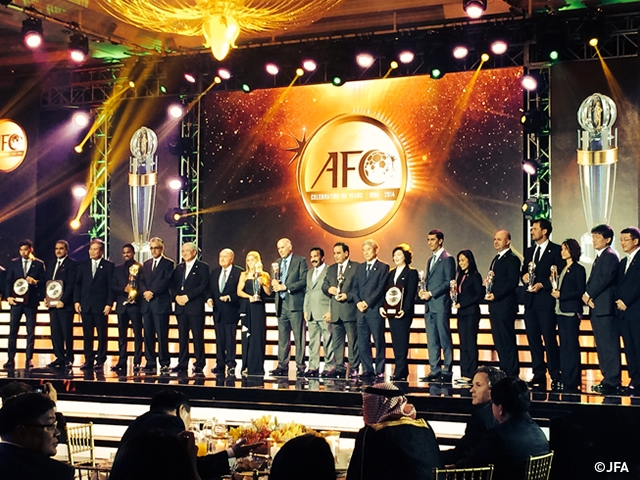 The Asian Football Association (AFC) held “AFC Annual Awards” ceremony on Sunday 30 November in Manila, Philippines. Japan received total of six awards including one awarded earlier ? AFC Inspiring Member Association of The Year to start with. The other awards include JFA Honored Chairman OGURA Junji for the Diamond of Asia award, Japan U-17 Women’s head coach TAKAKURA Asako for AFC Coach of The Year (WOMEN) for three straight years 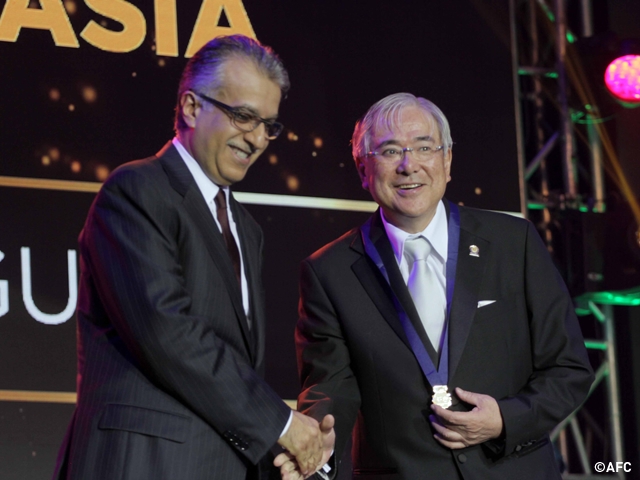 OGURA Junji (JFA Honorary President)
This is third Diamond Award given to Japanese and I think I am much honored to given the award in the AFC’s 60th Anniversary gala event. I am pleased to be acknowledged of my contribution to Asia. Recent remarkable performance of Japan ladies, Nadeshiko Japan or Japan Women’s national team became the world cup winner, these are something Asian people also feel proud of. I would suppose the reason for receiving this award are partly thanks to Japan women’s splendid showing, again I am really pleased to see these women’s excellent performance.

Japan Football Association (JFA)
[DAINI Kuniya, JFA President]
I am much honored for getting recognition of the whole JFA activities. I think this is the recognition for JFA taking firm stand on fostering grassroots and youth ages, women’s and SAMURAI BLUE (Japan National Team) , across age groups. There are many things still remain to be dealt with. I am going to aggressively tackle them and get things moving.

AFC COACH OF THE YEAR WOMEN 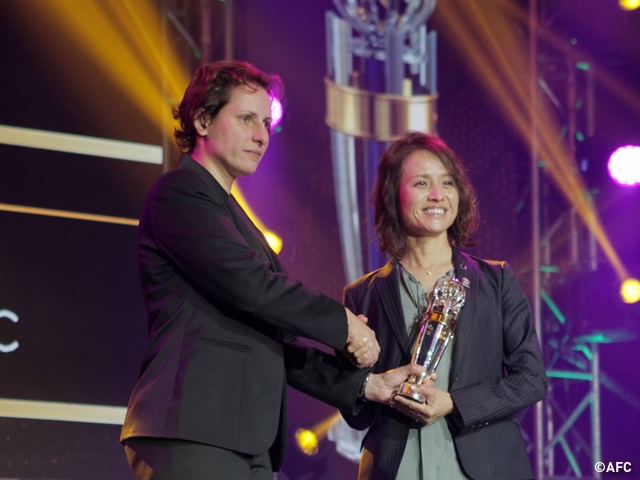 TAKAKURA Asako (Japan Women’s U-17 Head Coach) *third time three straight years
I believe this is the award given because the players played hard and generated a positive result, I would also like to extend my gratitude to many coaches before me who had engaged in training up the players. Studying as hard as ever, I am going to make continuous effort more than ever to become a good coach.

AFC FUTSAL TEAM OF THE YEAR

Japan Futsal National Team *third time
Miguel RODRIGO, Head Coach of Japan Futsal National Team
I believe receiving this honorable award reflects everyone’s effort put together - JFA, F.League, Referees Committee, supporters, media and sponsors. On the other hand, this award will place bigger responsibility on our shoulders.  Anywhere, any opponents we play, we have to play with our pride and it gives us a big challenge for our young squad. I just cannot stop here for satisfying with receiving this award. My goal is to become one of top eight countries in the world in ten years, so that we can get ready for the world cup 2016 and 2020. For reaching these goals and leveraging this award, I would promise to keep on playing at full throttle.

HOMARE Sawa, Player
The AFC Hall of Fame was inaugurated, I am much honored to be inducted in the AFC Hall of Fame along with wonderful persons like Mr. Okudera. I was surprised I was the only one to be selected as a player. I would like to extend my gratitude for giving me AFC’s recognition to my football life so far and all the people who supported me.

AFC FUTSAL PLAYER OF THE YEAR
Aliasghar Hassanzadeh *to be awarded

AFC FOREIGN PLAYER OF THE YEAR
Asamoah Gyan *to be awarded