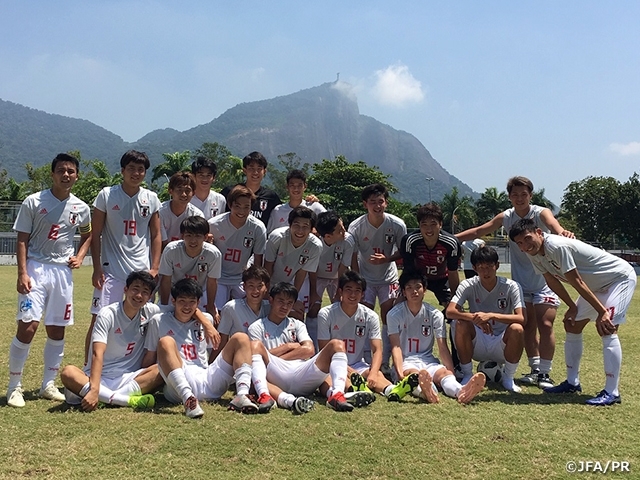 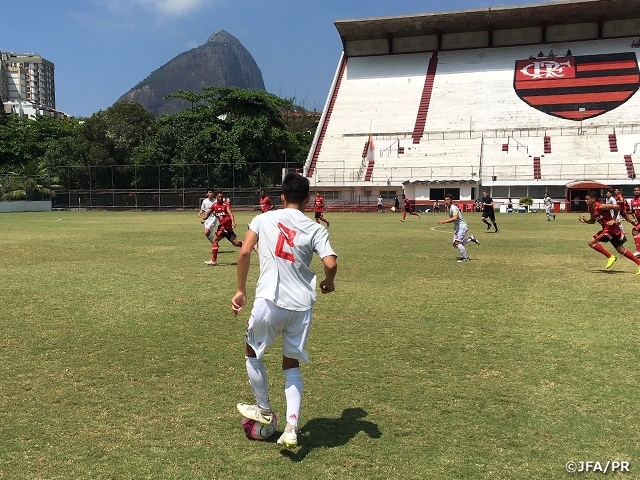 On Wednesday 19 December, the U-19 Japan National Team played their second match of the ongoing Brazil tour against the U-20 Clube de Regatas do Flamengo. The Japanese side won the match 2-1 against the Brazilian powerhouse where ZICO, JORGINHO, LEONARDO, ROMARIO, and RONALDINHO has played for in the past. CR Flamengo has also been regulars to finish at top in competitions such as the Campeonato Brasileiro Serie A and Copa Libertadores.

With the temperature rising as high as 36 degrees Celsius, the match was conducted in an irregular 30 minute-half format. However, the players performed aggressively from the beginning of the match, as if the weather had no impact. The U-20 Clube de Regatas do Flamengo has won the Copa Sao Paulo de Futebol Junior this year, which is a tournament held every January and widely considered as one of the most important tournaments for the young footballers of South America. With the tournament scheduled in a month, the Brazilian side entered the match with great enthusiasm, attacking the ball with high intensity. Although the team consists players of the same age group as the Japanese side and even with the presence of amateur players, CR Flamengo broke through the flanks with simple give-and-goes while earning fouls by effectively utilising their body in fifty-fifty situations. Despite being forced in the defensive end in the first 10 minutes of the match, Japan gradually picked up their rhythm through their composed defence and started to move the ball around with a good pace. In the 14th minute, MIYASHIRO Taisei forced a turnover near the half-way line and delivered the ball to allow NISHIKAWA Jun to take on the goalkeeper one-on-one. Nishikawa’s shot came short from capturing the net as his attempt sailed over the cross bar, but Japan continued to show aggression in the final third to threaten the opposing goal. Their efforts materialised just before the end of the first half as Miyashiro converted the freekick won by Nishikawa to send the match into halftime with a 1-0 Japanese lead.

The second half saw the Brazilian Club change their line-up to a more attack minded formation, but the Japanese squad maintain their composure in defence to take control of the match. With the scorching heat seemingly taking effect on the performance on the pitch, Japan substituted multiple players in the 43rd minute, but the opposing side took advantage of the small gap it has produced. In the 47th minute, Japan turned over the ball in the left flank, allowing the Brazilian side to initiate a fast break and score the equaliser. Japan almost conceded the lead in the 51st minute, when a shot from distance nearly captured the goal, but the Japanese goalkeeper OSAKO Keisuke came to the rescue to keep the score intact. With strong intention to win the match, Japan increased their intensity to create opportunities. In the 57th minute, SAITO Mitsuki chased down a lobbing through ball delivered by HIRAKAWA Rei, but the opposing goalkeeper made a timely effort to scoop the ball away from Saito. It was KUBO Takefusa who broke the deadlock in the final minute of the match as he earned a foul in the box to earn a penalty kick. Kubo converted the spot kick himself to give Japan the 2-1 victory. 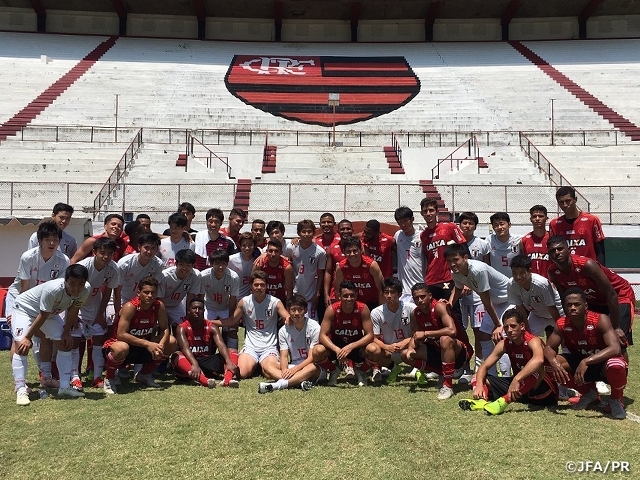 DF SEKO Ayumu (Cerezo Osaka U-18)
We faced a very strong side today and struggled to adjust to their fluent position changes, but we kept on talking to each other to make the adjustments on the pitch. We lost possession of the ball in unfavourable ways and were forced to play defensive for a long stint, but we managed to fight through as a team. With the season being the opposite of Japan, it was very difficult to condition ourselves, but we still had to be clearer on our decision makings as a team, especially when making the approach in defence. We will now face the U-19 Brazil National Team who we’ve fought against in our Mexico tour in September. We already now that they are one of the best teams of the World. With us drawing the previous match, and considering they are playing at home this time, we must prepare ourselves thoroughly. We have very limited time ahead of the FIFA U-20 World Cup Poland 2019, so we must take each match importantly and work to heighten our performances.

FW NAKAMURA Keito (Gamba Osaka)
I am glad that we were able to earn a victory under such tough condition. However, I personally feel like I have underperformed today. I need to make a bolder move to exploit the space behind the opposing defenders, combine with my teammates more effectively, and fight for the ball with more intensity in our next match. This tour in Brazil has given us the opportunity to experience the strengths of the South American teams and risen the standards of our daily trainings. This will be my first time facing the U-19 Brazil National Team, so I am very much looking forward to playing against them. We hope to finish up our tour in a high note. With the FIFA U-20 World Cup Poland 2019 fast approaching, we may not be able to make dramatic changes, but we can still make necessary adjustments, so we will continue to strive to better ourselves so that we can compete at the world stage.

MF NISHIKAWA Jun (Toko Gakuen High School)
This was is my first callup to the U-19 Japan National Team, so I am very happy to be here. I have been craving to place myself in a higher level, so being able to join a team that will compete at the FIFA U-20 World Cup Poland 2019 gives me a great opportunity. We weren’t given sufficient time to warmup ahead of the match due to our travel time to the match venue, but we managed to keep our composure and showcase a good performance against a strong opponent. I personally am glad that I was able to experience this match under tough circumstances. We struggled against the quick ball movements displayed by our opponents at first, but we manged to get used to the speed and create opportunities for ourselves as time progressed. However, we still could have scored more goals and make better approaches in defence. We must feed off of this match and prepare ourselves ahead of our match against the U-19 Brazil National Team. Through this tour, we hope to be able to put up an equal fight against the quick agility and strong power of the South American players. I also would like to become capable of displaying my full potential against the world’s best players. This tour provides us with a precious experience to prepare ourselves ahead of the FIFA U-20 World Cup Poland 2019, so I will make use of each day and work hard so that I can be selected for the final squad of the World Cup.

FW KUBO Takefusa (Yokohama F・Marinos)
There is a part of me that strongly believes that Brazil is the epicentre of football, and through this tour, I am hoping that I can absorb not only their techniques and strengths, but their thought processes and decision makings on the pitch. With the long travel prior to the match and the hot weather, we faced a tough condition in this match, but I am glad that we managed to finish off the match with a win. However, we allowed our opponents to take control of the ball for a long stint, so we must not be satisfied with our performance, both at the individual and team level. We have played against the U-19 Brazil National Team in Mexico before, and they are an opponent that I am always looking forward to face. They have players that I have been eying on, so I hope to showcase a good performance to cap-off this tour in a high note ahead of the FIFA U-20 World Cup Poland 2019.

FW MIYASHIRO Taisei (Kawasaki Frontale U-18)
After experiencing the AFC U-19 Championship and earing the spot in the FIFA U-20 World Cup Poland 2019, it made us realise that what makes the difference at the world level is the ability to score goals and to win the ball at crucial moments. During this tour, I personally would like to focus on scoring goals and to win the fifty-fifty balls even against stronger opponents. In today’s match, we managed to showcase a collective effort in defence and make the necessary adjustments during the match. However, we weren’t able to win the loose-balls in many occasions. That could be crucial when playing at the world stage, so we must improve on that aspect. I am glad that I was able to capitalise on the freekick. The U-19 Brazil National Team is one of the best teams of the world and we drew against them last time, so we will prepare ourselves well so that we can win this time. With the FIFA U-20 World Cup scheduled in just a half year, we must focus on each match, each training session, and our daily routines on and off the pitch so that we can improve as a team ahead of the tournament.

*Local Time
*The schedule and match venue are subject to change due to the team condition, the weather, etc.