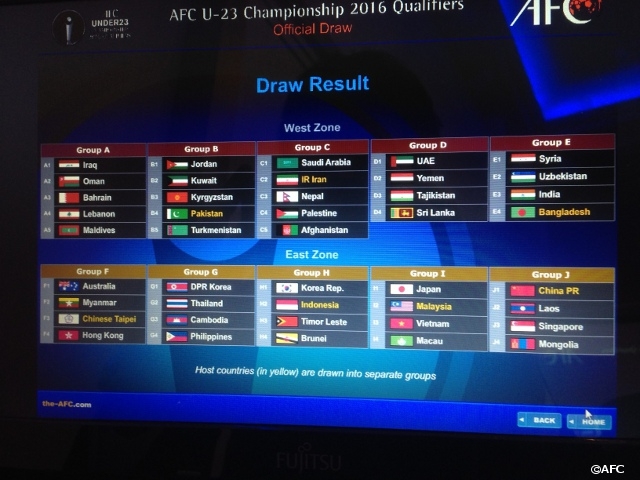 On 4 December, the AFC held the draw for “AFC U-23 Championship 2016 Qualifiers” at Kuala Lumpur Malaysia and the qualifying groups and fixtures were set as follows.

Japan were placed in Group I with Malaysia, Vietnam and Macau, and its qualifiers will be hosted by Malaysia.

Groups for the AFC U-23 Championship Qualifiers

* Ten group winners and five best-second placed teams from all groups (total 15 teams) will qualify for the final competition where hosts Qatar await.
*Countries with bold are ones fixed for holding qualifying round.

The qualifiers will be held from 23 March to 31 March 2015. (according to the AFC calendar)

I am glad to know the place for qualifying round is fixed, as it had not been decided for a while. As we are going to play in Malaysia, a hot country, it is going to be a good simulation for us to hold trip in December. In preparation for the final round, I want to demonstrate Japan’s potentiality from the qualifiers. All the three countries to be faced in qualifiers look very tough when playing in Malaysia at the time of the qualifying period. As Vietnam national team is led by MIURA Toshiya, I am quite motivated to face them.