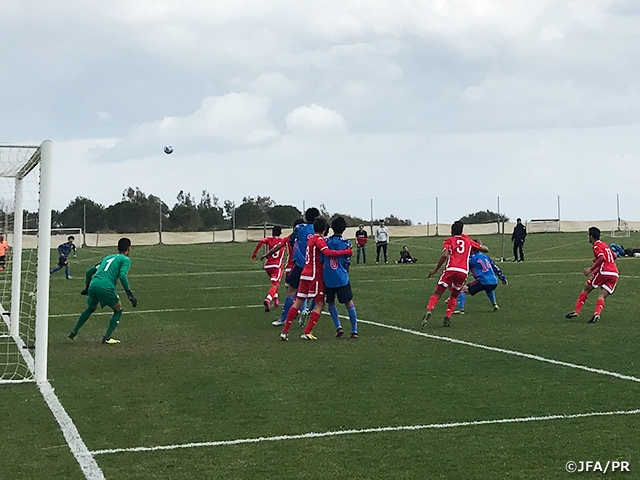 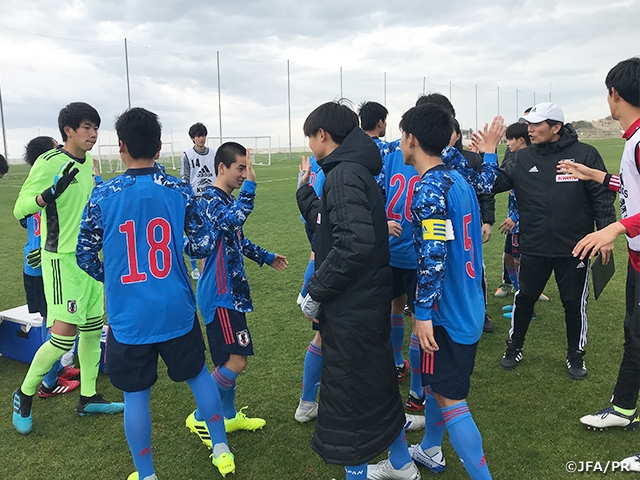 In the early minutes of the match, the Japanese players struggled to cope with the Tunisian players’ physical strengths, but gradually picked up their pace as the match progressed. Forward MAEZAWA Hiroki and midfielder TANAKA Jigen each created a close opportunity but fell short from scoring the opening goal. On the other hand, Tunisia also came close to scoring the opener, when they created an opportunity from a long counter. Despite allowing the opponent to break through, the Japanese defence line led by TAKEUCHI Ryotaro showcased their resilience to keep the match scoreless.

The first goal of the match came in the 17th minute, when Japan’s MINAMINO Harumi responded to the through ball sent by KITANO Sota and converted the one-on-one against the Tunisian goalkeeper. Although Japan managed to take the lead, the team struggled to keep possession of the ball, as they conceded the equaliser from a counterattack in the 33rd minute.

In the early minutes of the second half, Kitano was sent off from the match when he made an illegal contact with the opponent. With the team facing adversity, coach MORIYAMA Yoshiro told his players, “This is a good simulation towards the AFC U-16 Championship. Let’s overcome this situation as a team.” After Japan being forced to play with 10 players, Tunisia took control over the match, but the Japanese players showed great persistency to keep the match tied at 1-1. As the match approached the closing minutes, Japan started to outrun the opponents, as they effectively utilised the width of the field to create opportunities. Forward CHIBA Hiromu broke through to face the goalkeeper one-on-one, but his shot was blocked by the retreating defender. SUZUKI Hiroto also came close to scoring the game winner in the final minutes of the match, but his effort fell short from finding the back of the net, as the match ended with a final score of 1-1.

The two sides will play a rematch on Tuesday 4 February. Ahead of their rematch, the U-16 Japan National Team will face the U-16 Czech Republic National Team on Friday 31 January. 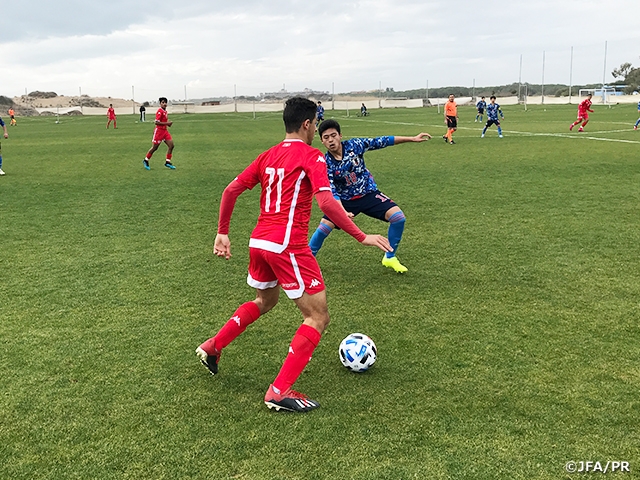 DF #2 TAKEUCHI Ryotaro (FC.Fervor Aichi)
This match allowed us to realise what we lack as a team. In that sense, this match provided us with a wonderful learning experience. Every player worked extremely hard and created plenty of opportunities. However, we weren’t able to control the ball possession and conceded a goal from our own mistake. Ahead of the qualification round of the U-17 World Cup, we must remind ourselves that a simple mistake can cost us a match. We will have another opportunity to face Tunisia, so we will do our best to win our next match.

DF #20 DOI Kanta (FC Tokyo U-15 Musashi)
We were able to hold two days’ worth of intense training sessions before facing the Tunisia National Team. Playing in an environment away from Japan, we struggled to adjust to the environment and made many mistakes, but each player showcased great efforts to limit the damage to just one goal. Although we managed to create many opportunities, we were only able to score just one goal. We hope to raise our performance in tomorrow’s match and score more than two goals.

MF #10 OBATA Toshiki (Gamba Osaka Junior Youth)
With this being our first match of this tour, we made many mistakes in the early minutes of the match, but we still managed to capitalise on our opportunity to score the opening goal. However, our plays got sloppy after we conceded the equaliser to Tunisia. We managed to showcase a better performance in the second half but failed to score the game winner. We hope to do a better job tomorrow to win the match.