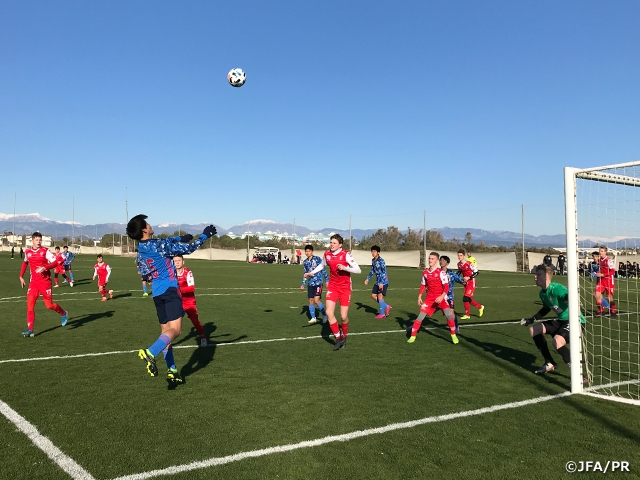 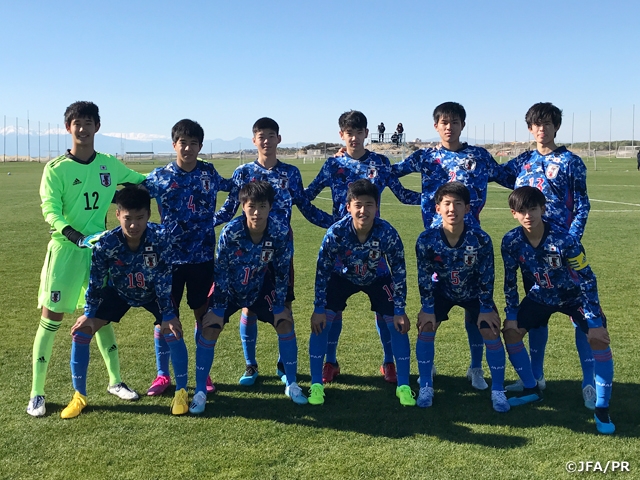 Ahead of the match, a team meeting was held at their hotel where the players reviewed their first match against Tunisia. Despite having one of their players getting sent off, the team showed great energy to overcome the adversity. At the meeting, the team also went over their defensive strategies to prepare for the next match.

The second friendly match played in Turkey started with both sides testing the waters. While both sides struggled to create any opportunities in the early minutes, Japan broke the silence in the 24th minute, when CHIBA Hiromu responded to a through ball sent by NARAHARA Yoshiki. The Japanese striker broke through the Czech defence line and converted the one-on-one against the goalkeeper to give Japan the opening goal. With momentum on their side, Japan created another close opportunity in the 33rd minute, when SUZUKI Hiroto posted up to setup a chance for TANAKA Jigen, but this play fell short from finding the back of the net.

Japan doubled their lead in the 40th minute, when Suzuki reacted to a long ball delivered from a counterattack. Despite getting chased down by a Czech defender, Suzuki struck a lobbing shot that went over the goalkeeper’s head, giving Japan a 2-0 lead at halftime.

The second half saw Japan dominate the match through their quick ball movements and agility. In the 74th minute, Suzuki scored his second goal of the match to make it 3-0. With Czech Republic arriving in Turkey on the night before, the team seemed to be fatigued towards the end of the match. The Japanese players took advantage of the situation to penetrate the flanks and created more opportunities, but their efforts fell short from capturing the fourth goal, as the match ended with a final score of 3-0. 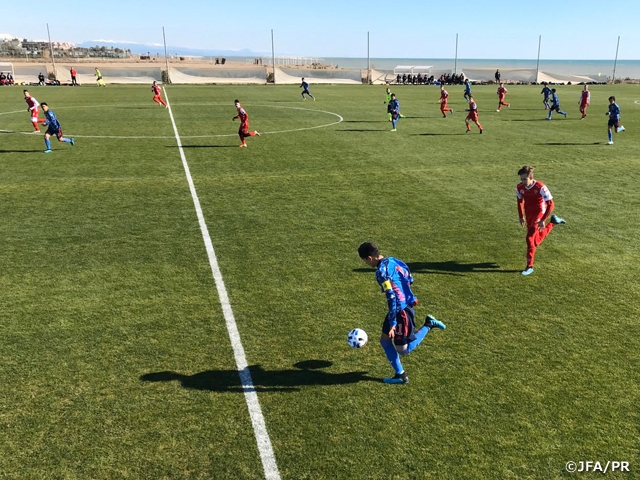 MF #11 NARAHARA Yoshiki (Sagan Tosu U-15)
In today’s match, we were able to intentionally move the ball around to create many opportunities. However, we lacked quality in the final third to convert the chances, so we must heighten the quality of our finishing touches. I was given the arm band for this match, so I must be more responsible to lead the team in a positive way. We must improve ourselves in the areas we did poorly today and try to showcase a better performance in our next match.

FW #15 MAEZAWA Hiroki (Omiya Ardija U15)
I am very happy to be selected into the U-16 Japan National Team for the first time. We were given the opportunity to face a foreign team with great physical strengths, but I feel like my plays were effective against the opponent. It gave me great confidence moving forward, but I must not forget to improve on the aspects that didn’t go well in this match. I will try to learn as much as possible from the opponents and my wonderful teammates, so that I can improve myself as a player.

FW #17 SUZUKI Hiroto (Gamba Osaka Junior Youth)
In today’s match, we were able to keep the ball moving with great pace. The fact that we were able to score the first two goals while we had possession of the ball had a great impact on the outcome. However, we still lost the ball from careless mistakes and our overall quality in the final third was poor, so we must improve ourselves, both as a team and as individuals. We still have two more matches, so we hope to work hard and strive for a higher level.