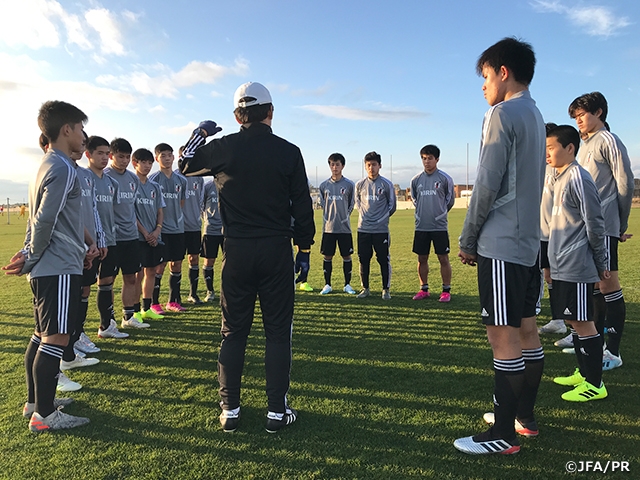 On Tuesday 28 January, the U-16 Japan National Team started their training camp in Turkey. The team is structured with players born after 2004 and the team will compete at this September’s AFC U-16 Championship Bahrain 2020 to earn their spot into next year’s FIFA U-17 World Cup. At this tour, the team will play a total of four training matches, two matches against both the U-16 Tunisia National Team and the U-16 Czech Republic National Team.

After leaving Japan on the evening of Monday 27, the team travelled for nearly 16 hours to arrive in Antalya, Turkey on the morning of Tuesday 28.

The team held meetings before the training session and after dinner to review last year’s Asian qualification round, where coach MORIYAMA Yoshiro went over the team concept. The team also covered the data gathered from last year’s FIFA U-17 World Cup, where Japan was eliminated at the round of 16. Comparing numbers with the semi-finalists of the tournament, coach Moriyama explained the essential factors that are required to reach the top tier of the world. The team reviewed match films of the U-17 Brazil National Team, who won the title, to build their motivation to become the world champions. 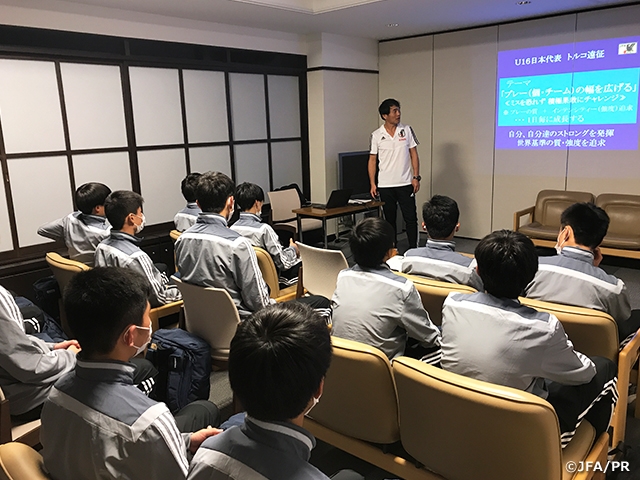 On this day, the team held a training session in the evening, where conditioning coach OGAI Tomohiro led the team through a thorough warmup routine, before coach Moriyama and assistant coach HIROYAMA Nozomi conducted a training session that focused on their passing speed. Despite the long travel, the players showed great energy on the pitch and stayed after practice to put in extra time to work on their ball touches. 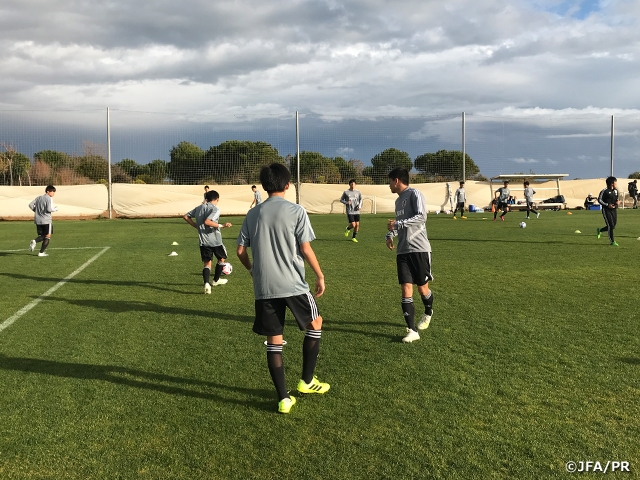 DF #3 SAITO Haru (JFA Academy Fukushima U15)
I am very honoured to be selected into the U-16 Japan National Team. We will be facing both Tunisia and Czech Republic twice at this tour. Both teams are strong opponents, but I will give my best efforts towards the team’s victory. Although I am selected as a defender, I hope to actively showcase my presence in offence so that I can score goals in these matches.

MF #5 SAKAI Shunya (Sorriso Kumamoto)
I am very happy to be selected into the squad for this tour. After the long travel, we arrived in Turkey yesterday morning, and had time to get rested during lunch time. We were given the opportunity to train in the afternoon and work on our ball touches on the pitch. Although some of the new players looked nervous, we were able to communicate well with each other. We spent time passing the ball around with the entire team after the training session, and it helped us break the ice. The tour has just begun, and I am sure there are many challenges waiting ahead of us, we will work hard as a team and try to learn from this whole experience.

MF #13 GOTO Keisuke (Jubilo Iwata U-15)
We spent most of our time traveling in the past two days and held a light training session in the afternoon today. Although we were tired from the long travel, we were able to enjoy ourselves in the training session. We will be facing consecutive matches in a few days, so we hope to get rested and prepare ourselves for the upcoming matches.

FW #18 CHIBA Hiromu (Cerezo Osaka U-15)
I am very happy to be named into the U-16 Japan National Team. As long as I am selected into the squad, I will give my utmost efforts to showcase my full potential. Through this tour, I hope to find out how I cope with different environments and see what I need to improve as a player to play at the world stage.