U-16 Japan National Team Report: the Caspian Cup 2014 in Azerbaijan 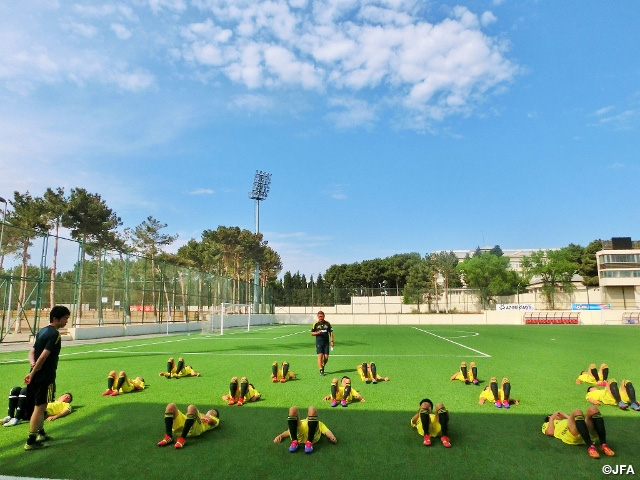 On the second day, the team took a 45-minute ride to Sumquyit where they would have the first match against Tajikistan, and took on physical workout including circuit training and sprinting.

As the training went on rounds after rounds, players kept encouraging each other vocally with words like “Come on, guys!” The roster can be different from time to time, but the team concept on and off the pitch and the vision of the “98 Japan” remain consistent.
After completing the physically-challenging workout, the faces of the players showed signs of improvement as a team already on the second day. 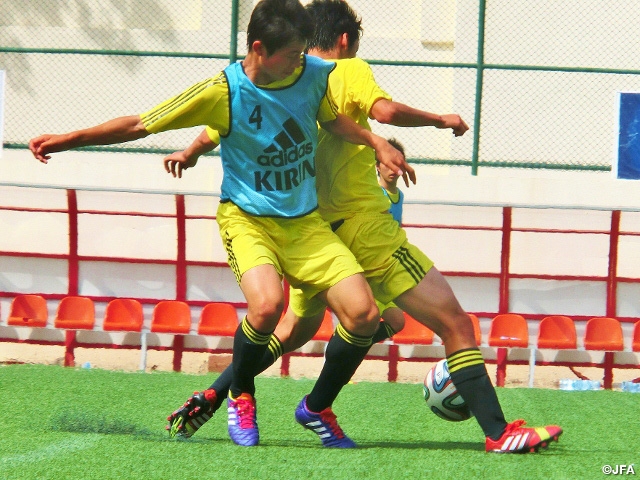 In the afternoon, the team had another training session for two hours at the field of BAKI FK, a local club located between the team hotel and Sumquyit.
The afternoon workout started with stretching, stepping drills and sprints just as the morning session, and then went on to fundamental drills, shooting drills and scrimmages after that. The preparation for the match the next day was well under way. 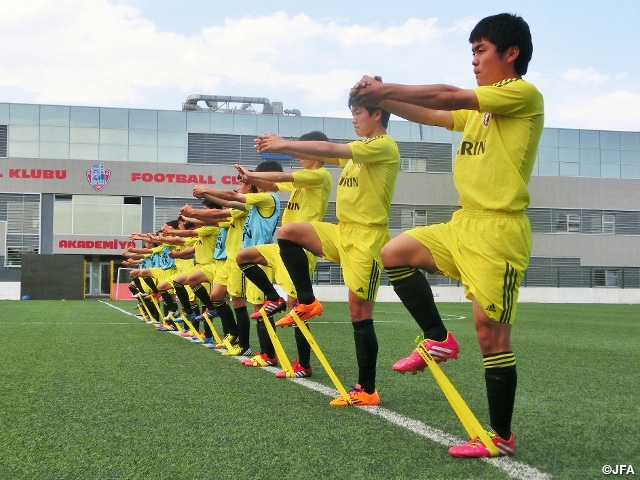 Tomorrow, the team will have light conditioning drills in the morning before playing the first match of the tournament against Tajikistan in the afternoon.

MORIYAMA Yoshiro, Assistant Coach
It was the day before the match, but we had two sessions and spent good amount of time for making sure our offence and defence. The morning we had a very tough physical workout, but by doing a tough workout altogether we got stronger as a team. Finally we will have the first match tomorrow. We will show what this Japan team can do all over the pitch and get three points.

DOAN Ritsu（Gamba Osaka Youth）
We had two sessions in the morning and afternoon, the communication among the team got better, and I felt we were coming together as a team. Personally, I will try to play and keep “observing how the opposition does” at the same time. Last year Japan finished at the third place, but this year we will win this cup together as a team.

MORIOKA Riku（Jubilo Iwata U-18）
Today in the morning, the coach taught us how to control our defence line, but it was too hot and we couldn’t concentrate enough. This is my first time to be on the national team roster, and I am realising how important it is to do body-core training and eat right food. We will make sure we get ready for the tournament starting from tomorrow.

KAJIYAMA Kanta（Nagoya Grampus U-18）
We have got used to the time difference, and this team is coming together nicely. We did scrimmages today, but we are not good yet at getting the feel of how the opposition plays. So we will do adjustments tomorrow morning for the first match of this tournament against Tajikistan in the afternoon. Lase time we finished third. This time we will play dominantly and win the championship.