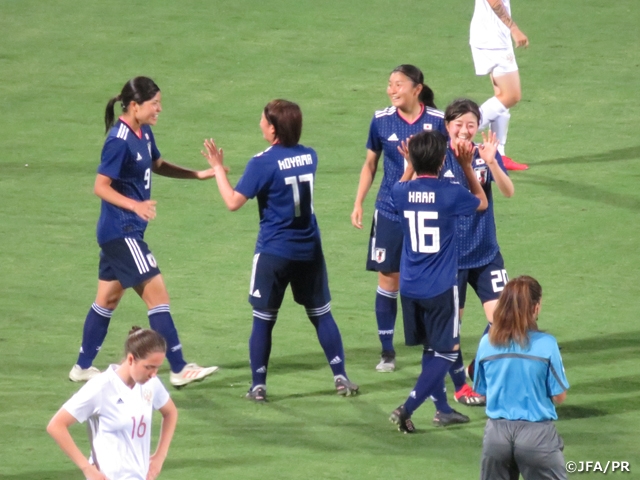 The match started off with Russia showing great intensity and took the initiative through their quick attacks. While Japan tried to find their rhythm by connecting short passes, they struggled to make timely decisions and failed to pick up their pace. However, the tide started to shift after a close opportunity was created for Japan in the 10th minute, when KOYAMA Yurina responded to a pass delivered by ISHIDA Nanami to penetrate the open space, but her run was called offsides. With Japan gaining momentum, OUCHI Rio captured the opening goal in the 14th minute, when she converted a cross from CHIBA Remina. Chiba continued to create opportunities during the first half, but the match entered halftime with Japan leading 1-0.

During halftime, coach MOCHIZUKI Satoru told his players to have a wider perspective before making decisions and to communicate more on the pitch.

The second half saw Japan taking control from the start. Ouchi scored her second goal of the match when she redirected the shot taken by MURAKAMI Maho in the 49th minute to double the team’s lead. In the 72nd minute, IMADA Reina responded to a pass delivered by HARA Yuka and induced a foul inside the box to earn a penalty kick. Imada took the spot kick herself, but her attempt was saved by the Russian goalkeeper. Just one minute after denying Japan’s opportunity to extend their lead, Russia capitalised on a counterattack to cut their deficit in half.

With momentum on their side, Russia rallied towards the end of the match, but Japan managed to hold onto their lead to finish the match with a final score of 2-1. 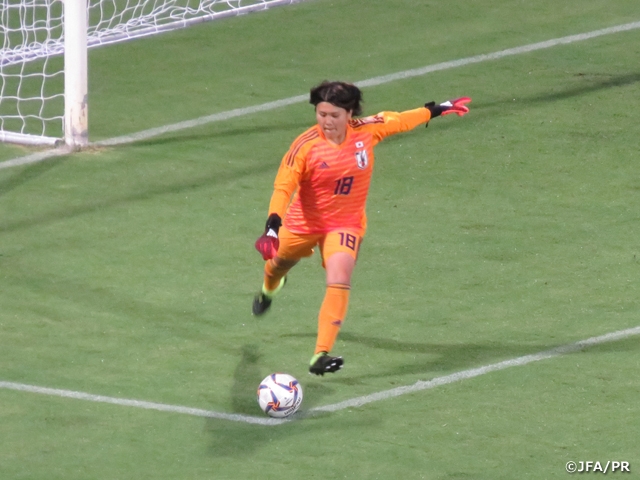 MOCHIZUKI Satoru, Coach
We managed to win a close battle against Russia at the semi-finals. It was a very close match, but our players showed wonderful efforts to win the individual battles and great teamwork to earn their ticket to the final. The first two goals gave us the opportunity to take control of the match, but we failed to convert our chances to capture the third goal and ended up giving our opponents the opportunity to rally back towards the end of the match. However, the team showed great persistency in defence and kept a good distance between each other to fight through the entire match. In order to showcase our best performance at the gold-medal match, we will give our best efforts to recover from this match and prepare ourselves ahead of the next match.

GK #18 YONEZAWA Moeka (Teikyo Heisei University)
With this being the semi-final match, I was a bit nervous, but I entered the match with a strong intention to showcase my best performance to keep a clean sheet. I am glad that we were able to win this match 2-1, but we must acknowledge the fact that we gave up a goal from a counterattack. I also made poor decisions on the field and couldn’t collaborate with the defence line as much, so those are some aspects I must improve on. We will now play in the final. It will be our last match as a team, so we hope to give our utmost efforts to win the match and leave the tournament on a high note.

DF #13 HIGASHI Natsuki (Tokuyama University)
Despite facing a difficult stretch towards the end, I am glad that we were able to win the semi-final match against Russia. At an individual level, I lacked the speed to make the decisions to press up, which enabled our opponents to evade our pressure, but I feel like I managed to make the adjustments in the second half. We hope to prepare well ahead of the final, so that we can go back home with the tournament title.

MF #16 HARA Yuka (Himeji Dokkyo University)
It was a tough match, but I am happy that we managed to advance through with a victory. My ability to break through with my dribbling skills is my strong point as a player, and I feel like was able to aggressively attack the opponents in today’s match. We faced many difficult stretches during this match, but we managed to actively communicate with each other and kept our focus until the very end. An even tougher match awaits us at the final, but we will work hard as a team to earn ourselves the gold medal.

FW #9 OUCHI Rio (Toyo University)
We lacked our composure from the beginning to the end, and it was a very difficult match, but we managed to earn the victory as a team. At a personal level, I am glad that I was able to help the team with my goals, but at the same time I made many mistakes after forcing turnovers, so I hope to make the necessary adjustments ahead of the final. I will prepare myself so that I can score the game winner in the next match. This will be our final match with this team, so we will give our very best efforts to leave no regrets.