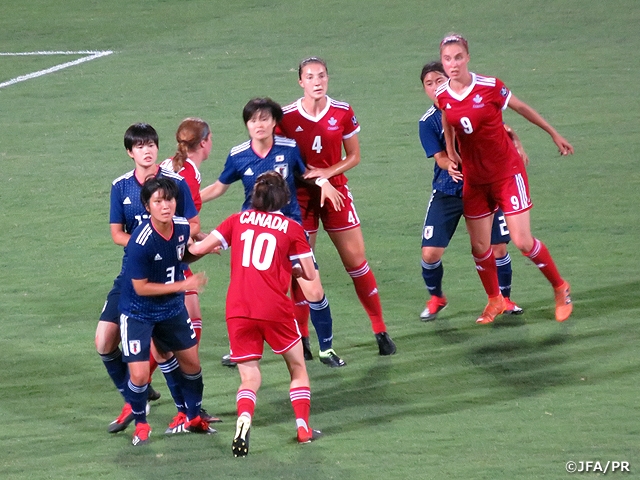 The match started off with Canada taking control of the match, as Japan struggled to find their rhythm in the early minutes. However, the team gradually picked up their pace to create opportunities, and captured the opening goal in the 11th minute, when IBARAKI Mitsuba struck a shot from mid-range. Japan showed some struggles following the goal but managed to double their lead in the 45th minute, when IMADA Sara converted an early cross delivered by ISHIDA Nanami to send the match into halftime with a score of 2-0. 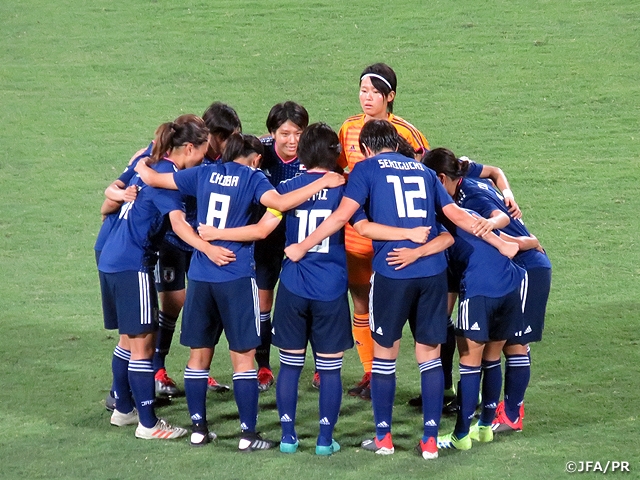 In the second half, Japan utilised their substitutions to change the dynamics of the match but lacked quality in their plays at the final third. With the opponents showing signs of fatigue towards the end of the match, Imada scored her second goal of the match in the 80th minute to give her side a commanding lead. Japan held onto their lead to close out the match and earned a 3-0 victory.

With this win, Japan has now secured their spot into the semi-finals, where they will face Russia on Wednesday 10 July at 21:00 local time.

MOCHIZUKI Satoru, Coach
It was a tough match, but we took many shots from distance to win the match 3-0. Our players displayed their ability to control the match by actively communicating with each other and showcasing their strong commitment to defend as a team throughout the entire match. We entered the match with the intention to keep a good distance between each other, get ourselves involved in as many plays as possible, showcase the individual strong points, and apply aggressive pressure from the front line. We still have many rooms for improvement, but the players showed great potential in this match.

GK #1 FUKUTA Mai (Nippon Sport Science University)
With this being our first match at the knockout stage, it was a match we couldn’t afford to lose, so I am glad that we were able to earn a 3-0 victory. However, we entered the match poorly, didn’t manage the game very well, and showed many flaws in terms of risk management. We only have one day before our semi-final match, so our priority is to physically recover from today’s match, but we must watch the game films to prepare ourselves ahead the match against Russia.

DF #2 KUDO Mako (Keio University)
I am glad that we were able to win this match where the loser has to goes home. We made many easy mistakes and struggled to find our rhythm in the early minutes of the match, but we managed to add layers to our offence in the second half to showcase our usual performance. In order to feed off of this experience, we must analyse the match and make the necessary adjustments ahead of our next match. We hope to prepare ourselves so that we can win at the semi-finals and ultimately take the title.

MF #7 IBARAKI Mitsuba (Nippon Sport Science University)
I was disappointed after I had to sit out the match against the USA, so when I heard that I was starting in today’s match, I was fully committed to contribute to the team. With the team lacking momentum in the early minutes of the match, I took a chance to strike a shot from distance. I am glad that my goal helped the team win the match, but we still need to make many adjustments ahead of the next match. We hope to win two more matches to take home the title.

MF #14 OKUTSU Rena (Nippon Sport Science University)
Although we struggled towards the start of the match, we gradually picked up the pace as the game progressed. The fact that we managed to score two goals in the first half gave us great confidence. After entering the match as a second half substitute, I felt the need to get myself more involved in our offence and take more shots. Although we must endure a tough game schedule, we have limited time to play as a team, so we must cherish every moment and give our very best efforts in our next match to earn a victory as a team.