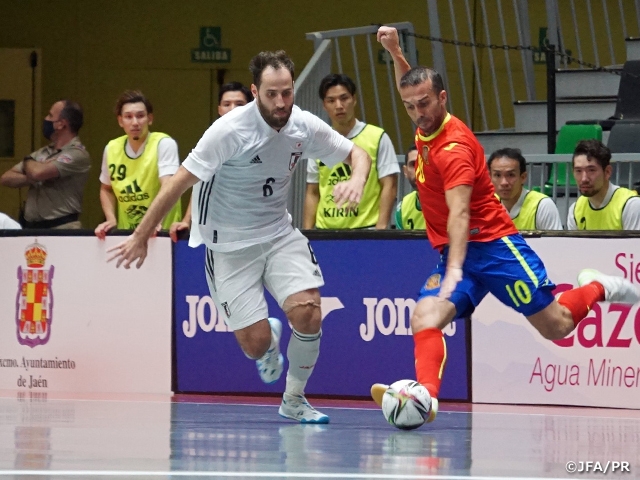 The first period started with Spain taking the initiative, creating numerous chances to threaten the Japanese goal, but PIRES Higor, who was named as the starting goalkeeper for Japan, made numbers of superb saves to keep the Spanish side scoreless. After surviving the early domination showcased by the Spanish side, Japan gradually picked up their pace. In the seventh minute, Pires blocked a shot attempt from a freekick before delivering a throw to MUROTA Yuki in the left side. The cross sent by Murota was met by MORIMURA Takashi, who made a sliding effort, but his shot failed to capture the target. Another opportunity was created in the 11th minute, when the ball was connected through HENMI Katsutoshi Rafael to YOSHIKAWA Tomoki, setting up a shot for HOSHI Shota, but this time the shot taken by Hoshi was blocked by a defender. Moments later, Henmi broke out from a counterattack to face the Spanish goalkeeper one-on-one, but his lob-shot was caught by the goalkeeper. Despite all the efforts made by Japan, it was Spain who scored the opening goal, as they converted a corner kick with a powerful volley-shot in the 16th minute. The Japanese side continued to create chances in the remaining minutes of the first period, but the Spanish goalkeeper stood firmly in front of the goal to deny Japan from scoring a goal, as the match entered halftime with Spain leading by a goal. 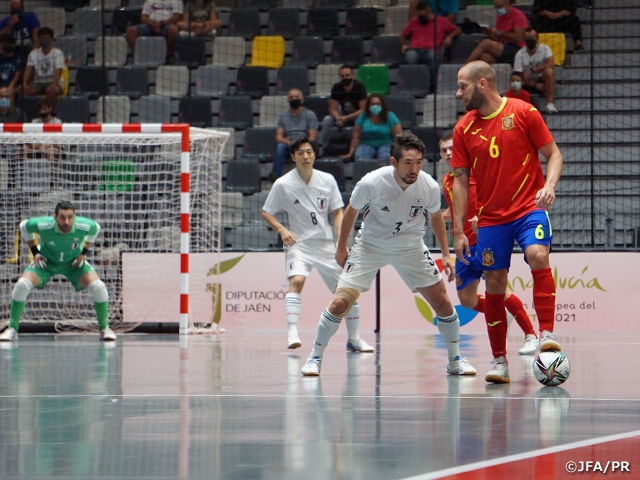 SEKIGUCHI Yushi stepped into the goal-mouth in the second period. In efforts to equalise the match, Japan applied aggressive pressure from the start. In the 21st minute, OLIVEIRA Arthur dribbled up right side and sent a ball towards the centre, but the shot taken by Yoshikawa was blocked by the opposing defender. HOSHI Ryuta, who had been showcasing a tenacious defensive effort to keep Francisco SOLANO at bay, had an opportunity to strike a shot, but his effort fell short from finding the back of the net. In the 24th minute, NISHITANI Ryosuke delivered a pass to Murota, who dribbled passed an opponent before taking a shot. With the shot being blocked by the goalkeeper, Muramori made an attempt to convert the deflection, but his shot was denied as well. While Japan struggled to convert their opportunities, Spain gradually took over the ball possession, inducing more fouls from the Japanese players. In the 37th minute, Japan committed their sixth foul, giving Spain a freekick from the second PK mark. Coach Garcia sent Pires into goal for this freekick, but Spain successfully converted the spot kick to double their lead. With time running out, Japan deployed their powerplay in the closing minutes, but fell short from scoring a goal, finishing the match 0-2.

The team will take a day-off on Wednesday 1 September before entering Lithuania on Thursday.

Bruno GARCIA, Coach
It was an extremely tight match, and two goals from set pieces decided the outcome. Fouls became a major issue for us in this match, but after playing against top teams like Portugal and Argentina, we feel that we are definitely closing down the gap between these powerhouses. However, in order to achieve our goal of becoming the focal point at the World Cup, we must polish our strengths while also improve the overall quality of the team within the remaining two weeks. As we make a deep run in the World Cup, it is inevitable that we are going to face these top tier team somewhere along the line. However, I feel that the Japan National Team is improving in a rapid pace and getting prepared for the competition through this series of training matches.

GK #1 SEKIGUCHI Yushi (Nagoya Oceans)
Knowing that we are going to face them at the World Cup, I feel extremely fortunate to be able to face Spain at this timing. Despite losing the match, we were able to feel and understand their intensity level and strategy, so we hope to make the most of this experience to prepare ourselves for the World Cup. To start with, we will give our utmost effort to advance through the group stage, so please cheer for us.

FP #5 MINAMOTO Akira (Tachikawa-Fuchu Athletic FC)
Facing an opponent we are scheduled to face at the group stage, this was the perfect simulation ahead of the World Cup. We were crushed by Spain in 2019, so it also gave us a great opportunity to clear the bitterness out of our system. Although we faced tough stints throughout the match, we were able to play with persistency until the end. We have limited time until the World Cup, but we hope to address all the issues we saw today and make the necessary adjustments. Personally, I was given countless learning experiences from Spain. Most of them were tough and painful memories, but I also have lots of gratitude, so I hope to express my emotions at the World Cup.

FP #6 YOSHIKAWA Tomoki (Nagoya Oceans)
We struggled to make adjustments against the quick pass works of our opponent. However, we still managed to showcase our persistency to keep it a close match. In terms of offence, there was a stark contrast between the minutes we were able to execute our game plan and when we couldn’t. It felt like we needed to broaden our options to take more shots. We only have two more weeks left, but we hope to strengthen and prepare ourselves so that we can earn positive results at the World Cup.

FP #8 KATO Minami (Shriker Osaka)
We were able to implement the experience we gained from our last encounter with Spain in 2019 and take necessary measures against certain plays. However, it is very disappointing that we lost the match by conceding two goals from set-pieces. It gave us an opportunity to rethink about our opponent’s strengths and our own strong points. We have definitely improved since our last encounter, so we will enter Lithuania with our heads held high. We hope to have our revenge against Spain at the World Cup. 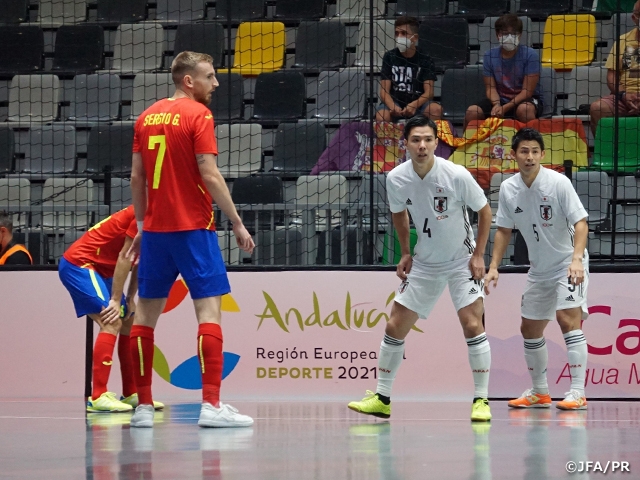