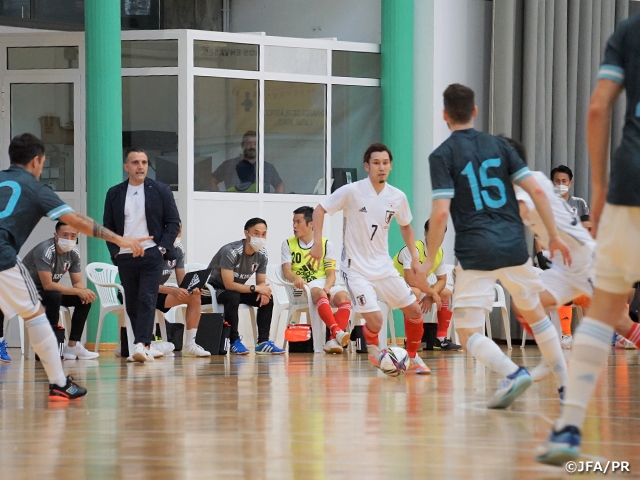 With the match being held at coach Bruno GARCIA’s hometown, Naron, Spain, many local fans supporting coach Garcia and the Japan Futsal National Team attended the match, creating a home game atmosphere for the Japanese side. Ahead of the match, coach Garcia gave a pep-talk to his players, “Let’s play with confidence, give 120% until the ball is out of bound, and fight hard to win the ball. Let’s win this match.”

Japan started SEKIGUCHI Yushi in goal with YOSHIKAWA Tomoki, OLIVEIRA Arthur, HENMI Katsutoshi Rafael, and SHIMIZU Kazuya as the four field players. Despite applying aggressive pressure from the start of the match, Japan conceded the opening goal in the first minute, as they allowed Argentina to capitalise on a long ball delivered from the opposite end. The defending World Cup champions doubled their lead in the sixth minute, when they caught Sekiguchi stepping away from the line, driving a shot from distance that sailed over the head of the Japanese goalkeeper. In efforts to rally back, Japan created close opportunities that threatened the Argentinian goal, but the shot taken by MINAMOTO Akira deflected off the cross bar, while MORIMURA Takashi’s attempt was denied by the opposing goalkeeper.

PIRES Higor started the second period to defend the Japanese goal, while Arthur struck the first shot of the period to lead the way. Japan’s high pressing approach started to show its effectiveness, as a close chance was created from a cross delivered by Yoshikawa in the 25th minute, but the attempt made by Shimizu went off the cross bar. Japan scored their first goal in the 29th minute, when the ball was connected from Pires to KATO Minami then to Minamoto, who controlled the ball superbly before sending the ball to MUROTA Yuki. The shot taken by Murota was initially blocked by the opposing goalkeeper, but Minamoto was there to convert the deflection. After cutting down their deficit in half, Japan continued to create opportunities, as HOSHI Shota struck the post in the 31st minute, followed by a spectacular individual effort showcased by Murota in the 35th minute. Pires also came up big in the defensive side, stopping a one-on-one situation in the 36th minute to keep the Japanese side in contention for the match. With time running out, Japan deployed their power-play, but fell short from scoring the equaliser, as the team lost to Argentina 1-2. 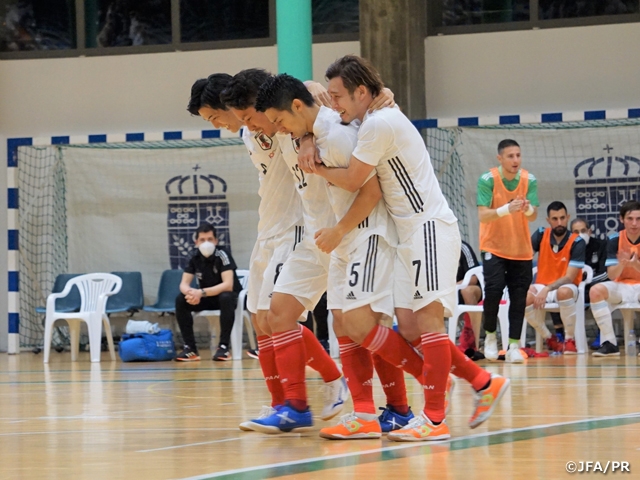 Bruno GARCIA, Coach
Although we were not able to obtain the result we were hoping for, the team was still able to make a forward progress. Our opponent showcased great quality to capitalise on two opportunities, but we also put up a great fight against the world champions, controlled the game, and displayed a close match. We picked up our pace in the second period, showcased a performance that could have got us a win, but it is disappointing that the players didn’t get the result they deserve. In hindsight, the two goals we conceded early in the first period turned out to be the difference in this match, but I am satisfied with the overall performance of the team. However, we must not forget that our goal is to prepare ourselves for the World Cup through the matches against Portugal, Venezuela, and the upcoming four matches scheduled ahead of the World Cup. Instead of losing our sight from these results, we must learn and make the most of these experiences and continue to work hard so that we can enter the World Cup in our best condition.

GK #2 SEKIGUCHI Yushi (Nagoya Oceans)
We conceded early goals that put us in a tough spot. It becomes very hard to come out of a hole once we concede those kinds of goals against strong opponents, so we must learn from this loss and make the necessary adjustments within the remaining time to prepare ourselves for the World Cup.

FP #5 MINAMOTO Akira (Tachikawa-Fuchu Athletic FC)
Despite facing the defending champions, we entered the match feeling confident that we can win the match as long as we showcase what we have been working on. We struggled in the first period after conceding the early goals but managed to take control in the second period. Although we are not getting the results we are hoping for, we will continue to work hard and make the most of the remaining time to prepare ourselves for the World Cup.

FP #12 MORIMURA Takashi (Vasagey Oita)
It is very disappointing that we are kept winless in the recent three matches. However, we have no time to waste, so we will try to feed off of this match and strive to prepare ourselves in the best way possible ahead of the World Cup.

FP #14 NISHITANI Ryosuke (Nagoya Oceans)
We saw some stints where we managed to showcase our strong points while containing our opponent’s strengths to control the game. It is important that we work and build on the positives. This match also reminded us that strong teams will exploit the smallest flaws, and that can be the difference of the match. We must learn and make the most of these experiences. In order to make history, we must not waste this experience and continue to strive for higher levels. We will do our best to win our next match. 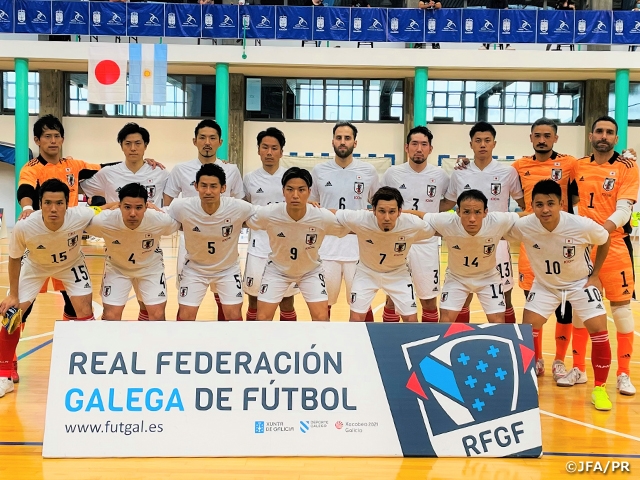