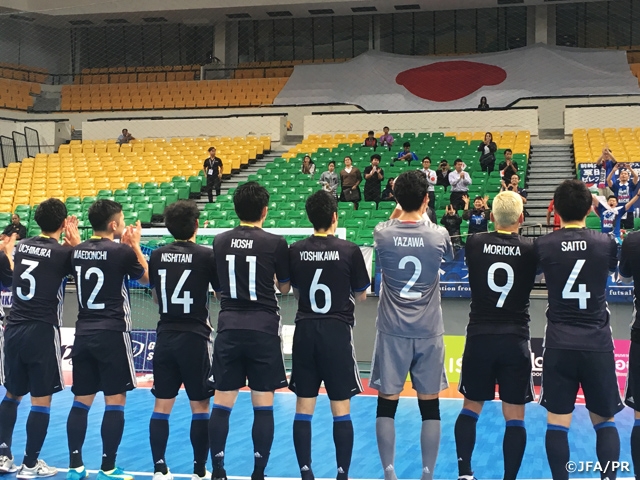 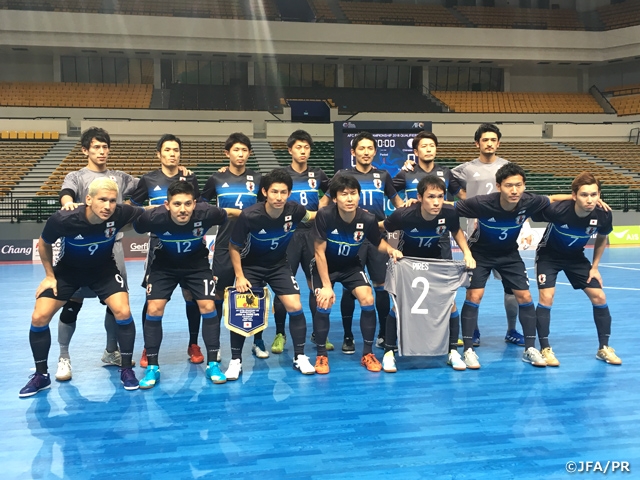 Japan claimed a comprehensive win over Macau by scoring a total of 11 goals in the last match yesterday, but still struggled to take early control in the game and required considerable time before they got settled and dictated the game. In contrast, they took the early initiative against Chinese Taipei by converting the some of their early scoring opportunities in the first half and put strong pressure on the opponents.

In the 3rd minute, MUROTA Yuki fashioned the first chance for the Japanese team, after he collected the ball on the left and dribbled past the opposing defenders to find SHIMIZU Kazuya, who made no mistake to score an opening goal in each of the games played in the tournament. Gaining momentum after this goal, HOSHI Shota doubled the lead in the 5th minute and NIBUYA Kazuhiro extended the advantage to three goals a minute later.

Chinese Taipei, on the other hand, created a wall of defence, while they looked for their chances to score by a quick counter-attack. Led by goalkeeper SEKIGUCHI Yushi who started in all the games of the AFC qualifiers, Japan kept a high level of concentration and prevented the Taiwanese side from striking back until the 8th minute, when the opponents capitalised on a momentary gap in defence on the left side and netted one into the Japanese net.

Even after conceding a goal, Japan did not lose their focus, and defended tenaciously and kept high possession of the ball, as they attempted to break through the opposing defence. Subsequently, Hoshi received a pass in the middle and scored the second in the 13th minute to reclaimed the three-goal lead and bring back the momentum to his side. Then, Nibuya added another on 15 minutes after he was played through by MORIOKA Kaoru before the halftime ended with Japan taking a commanding 5-1 advatange.

Japan’s dominance continued in the second half, as Hoshi completed a hat trick by netting another after 25 minutes. MAEDONICHI Matias Hernan tapped one home in the 32nd minute and YOSHIKAWA Tomoki ended the Japanese scoring fiesta by firing the eighth on 35 minutes to put an icing on a cake in the match that Japan had grabbed an 8-1 comprehensive win over Chinese Taipei.

Japan Futsal National Team, who had already clinched a spot in the AFC Futsal Championship after beating Macau in the previous game, finished the qualification round in first place. 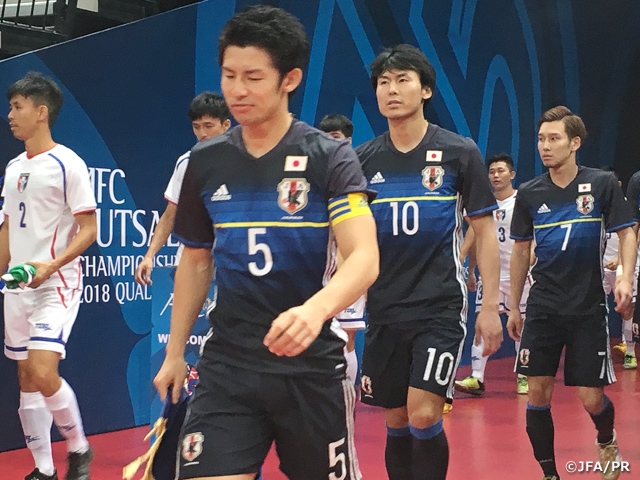 Bruno GARCIA, Coach (Japan Futsal National Team)
I am pleased that we clinched first place in the qualification round. That was our primary goal of the tournament. I felt that we displayed the strength of the Japanese national team in the match today. Towards the AFC Futsal Championship finals next year, it is important that we return to where we were in the previous competition. That is to say, we need to get back to the podium. We will make the necessary preparations to achieve that goal.

FP #5 MINAMOTO Akira (FUCHU ATHLETIC F.C.)
We kept our momentum from the Macau game yesterday and were able to overwhelm our opponents by not giving them any chances to attack from the beginning of the game. I believe that the level of play in today's game has set the standard for future macthes. I expect that we are going to face teams who will play at a much higher level in the AFC finals. However, if we can match the intensity and concentration levels of today’s game, then we surely have the chance to beat any opponents in the world. I must say that I have gained confidence in our team after an excellent match today as well. We will be looking to prove that point in the AFC Championship next February, but must make a good preparation to achieve such task.

FP #10 NIBUYA Kazuhiro (VASAGEY OITA)
I am pleased that we won three straight games in the qualifiers. I felt that our team has made progress with each game played in the tournament as well. In order to make a good preparation for the AFC Championship, I must work hard and improve myself once I get back to my club team.

FP #11 HOSHI Shota (BARDRAL URAYASU)
I am pleased that we have clinched a spot in the AFC finals with three straight wins as we prepared and did our best by focusing on one game at a time. I would like thank the support that we received from PIRES Higor who was not eligible to play in the qualifiers, the Japanese people who came to cheer us in the stadium and all the others who supported us back in Japan. I think that we achieved the desired result by sharing the team concept and working towards the common goal as the team. Personally speaking, I achieved a lot in the tournament thanks to the support that I received from my teammates. We don't have much time to prepare for the finals, but we are going to keep up the good work and make further progress as a team.

FP #14 NISHITANI Ryosuke (NAGOYA OCEANS)
I must say that we got through the qualifiers as a united team. I felt that we attained this result by keeping a high level of focus and intensity for the entire 40 minutes of play in every one of the matches including the third that we just played today. We have achieved the objective of this tournament, but this is not the ultimate goal that we are striving to attain. To reach that goal, we must work harder and improve even more to compete effectively against the top teams in the world. There is no time to waste for us. We were encouraged by all the support that we received during the tournament. Thank you very much for all your support.